A few months ago I wrote about how mayors are changing the way we think about food. Mayors are leading a revolution to improve the systems of how food is procured, produced, distributed, while minimising and managing food waste; through C40, they are working together to share best practices and new strategies.

This week, as the UN members gather for their General Assembly, I'm participating in a panel discussion on Urban Food Systems, hosted by our partners the EAT Forum, which continues to reinforce the effectiveness of global collaboration among cities. The message that I'll be sharing is straightforward: climate change is the biggest issue facing us at this time, and cities offer a great platform to bring about change. To underscore the urgency of taking action when it comes to food, I was quite taken by a recent WRI tweet showing that if food loss and waste were its own country, it would be the third largest greenhouse gas emitter. 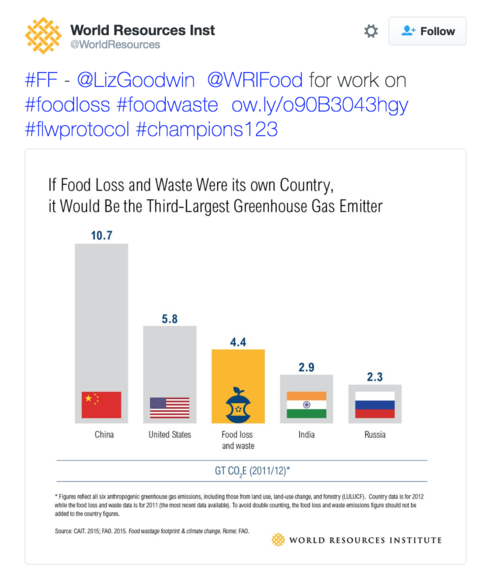 In the halls of the UN this week, which is also New York City's climate week, all are mindful of the great consensus reached in Paris at the COP21 meetings in December 2015 to work together to achieve the most challenging yet necessary target of a 1.5 degrees future. A climate safe future needs all of us to act now. I wanted to highlight a few best practices that we have seen in the C40 Network of over 85 megacities across the globe.
Cities are increasingly aware that the foods that should be eaten most frequently (for people's wellbeing) are also the foods that have lower environmental impacts. That is, food whose production uses less of the planet's resources in terms of water and land.

As an example of how cities are taking this message to heart, Paris and Copenhagen are working towards dramatically increasing the percentages of sustainable and organic food in public facilities. This is a cornerstone for any urban food policy. They're showing that the procurement of local and seasonal food heavily impacts the city-wide food miles while also affecting diet-related habits, which has the potential to generate new healthier and more sustainable food-trends at households level.

Likewise, Toronto is making healthier foods the easier choice with a range of groceries and mobile markets that are tackling the food deserts and food swamps (food deserts are neighbourhoods that lack grocery stores, and food swamps are neighbourhoods where unhealthful options are especially prevalent) options that often impact health statuses of entire neighbourhoods. In a similar vein, Curitibas's Nossa Feira's markets spread around the city help local producers get access to the market while making it even easier for citizens to purchase fresh, local, seasonal and healthy food.

Looking at a different aspect of the food system, London and Melbourne are tackling food waste. Through their FoodSave program, London is providing technical assistance on how to adjust portion sizes in restaurants and the hospitality industry, put surplus food to good use and dispose of unavoidable food waste responsibly. By adjusting portions, restaurants are saving money and minimising waste. At the same time, food waste that cannot be avoided can still be generative, and this is what Melbourne is doing with its community-level worm farms. The compost generated by these farms is fed back in urban farms to generate new, delicious produce.

There are plenty of other great examples of the virtuous cycles that cities worldwide are driving to address their urban food systems, and the upcoming Milan Urban Food Policy Pact Awards will showcase many of them. At the same time, and besides these successes, cities strongly feel they need to do even more. They are determinedly looking for new ways to scale up hundreds of small projects run at the neighbourhood and community level.

I am impressed at how ready cities are to be held to account for delivering action in line with the Paris Agreement's ambition. Much more still needs to be done and organisations like C40 and EAT are ready to support its cities achieve more, faster. Cities are intensely searching for new policies to pilot; new tools to finance innovative projects; and new partners such as restaurants and chefs, that might champion new commitments toward both sustainability and health. The work being done to improve urban food systems will help cities achieve a lower carbon footprint, deliver more healthful results and also be more resilient to potential disruptions. I think this is something we can all agree on.

This post is part of a series produced by The Huffington Post and the EAT Foundation, in conjunction with the high-level side event, "Urban Food Systems: The Nutrition Challenge," during the 71st United Nations General Assembly in New York. The EATx at UNGA is a collaboration with the Norwegian Ministry of Foreign Affairs. #EATx #eatforum