Today marks a milestone in the fight for common sense immigration reform in the United States. A federal court in New Orleans will hear arguments in the case challenging President Obama's executive actions on immigration.

Houston and Atlanta stand with nearly 100 cities nationwide in support of executive action, which would allow millions of immigrants to work legally and contribute to our nation's economy, while keeping families together. That is why we joined with mayors across the country to launch Cities United for Immigration Action, a coalition organized by New York City Mayor Bill de Blasio and Los Angeles Mayor Eric Garcetti to promote and implement these reforms.

We not only have the support of our constituents, but also that of most Americans -- 77 percent of the country supports a pathway to citizenship or legal status for the undocumented immigrants that the President's executive actions aim to assist. These are individuals who are business owners in our cities, taxpayers, customers at our local stores, students, and parents who want what we all want -- a brighter future for their children. From the economic benefits to businesses and families, it is evident that the national public interest is overwhelmingly served by implementing immigration relief by executive action.

Despite the clear patterns in public opinion across the country, many hard-working immigrant families continue to live under the threat of deportation -- despite their contributions to our cities' robust economies and vibrant cultures. That's because 26 states, including Texas and Georgia, are suing the federal government to block these executive action programs.

Ironically, Texas, the lead plaintiff state, would see its GDP rise more than $38 billion over 10 years if the programs were allowed to proceed, while Georgia would experience a $190 million increase in tax revenue within five years.

In recent months, over 70 mayors from our coalition representing 43 million people across the country -- many in the 26 plaintiff states -- filed a friend-of-the-court brief arguing that the court failed to consider the significant harms to America's local governments caused by this delay. Now the fate of President Obama's action could be decided at this hearing, and it is clear that cities, not plaintiff states, speak for most Americans on immigration.

When President Obama announced his executive action in November 2014, we both made it a priority of our administrations to support those residents who originally sought to take advantage of his relief programs. Our cities have created new partnerships to ensure that immigrants have access to reliable information and can connect with partner-area organizations that provide services to them.

But let's be clear: the president is not offering amnesty. In fact, as part of this same executive action, he has cracked down on illegal immigration at the border; made it a priority to deport felons, not families; and made criminal background checks mandatory for certain undocumented immigrants. We see President Obama's order as a balanced solution to our broken immigration system, especially given Congress' inability to deliver on comprehensive reform.

That's why, on behalf of the millions of people who reside in cities that support the President's immigration actions, we will stand together, united in the fight for immigration action, whether it's in the courtroom, in the halls of Congress, or on our very own streets. 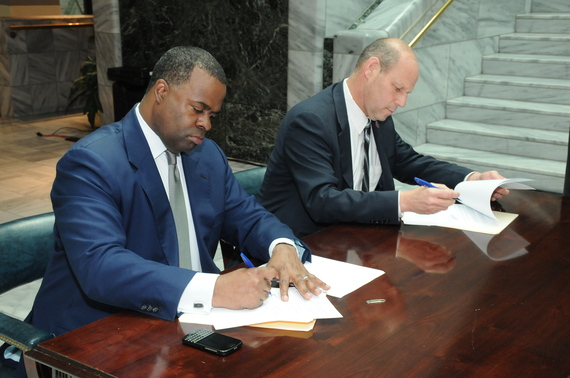 Mayor Kasim Reed and USCIS Director Leon Rodriguez sign a partnership letter to promote citizenship in the City of Atlanta.