Many cities are known for being a destination for their gourmet dining or a certain cuisine. But some places are famous for one specific food -- something you can only authentically eat in that one place.

This week, AskMen.com published a list of 50 cities known for a specific type of food. The list is completely delicious.

Check out the first 25 foods below, then click over to AskMen for the rest! 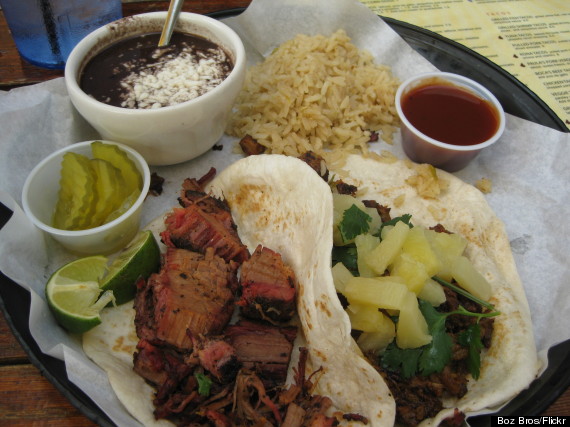 Cheap, nutritious and delicious, tacos have long been a staple of Mexican cuisine, and thanks to their proximity to the border, those culinary delights have made their way north, in a big way. But Austin’s taco craze is fueled by more than just the food itself: Food trucks have become a way of life there, servicing students, tourists and the late-late-night dining crowd. If you thought a meal on wheels couldn’t compete with normal restaurant fare, try an Austin taco. 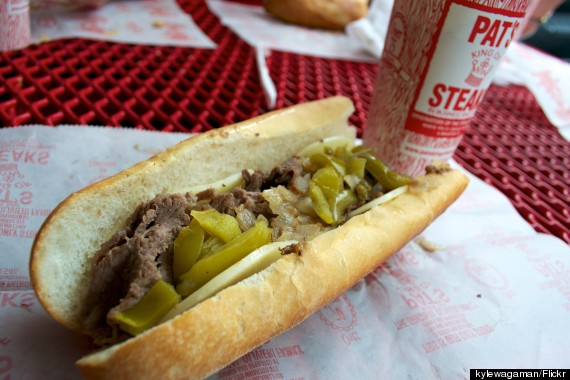 The exact provenance of this sandwich shop staple is hotly contested, but few doubt that it had its roots in Philadelphia, nearly 100 years ago. The ingredients are modest -- cheese, sliced steak and bread will do -- but the taste is out of this world, particularly if you find an authentic sandwich shop willing to take the time to actually cook the meat rather than just reheat it. 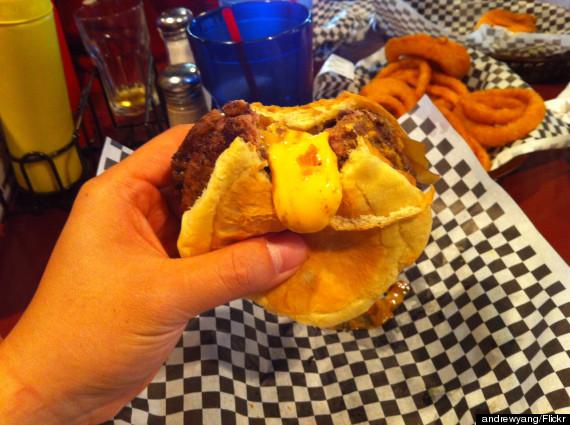 Two competing burger joints in Minneapolis both lay claim to this one, and so divided are they that they can’t even agree on how it should be spelled. But take one bite and you’ll be thankful for whichever mad genius first decided to put a slice of cheese inside a meat patty (instead of on top), resulting in meat with a melted cheese core. Your taste buds will thank you, even if your arteries decide to go on strike. 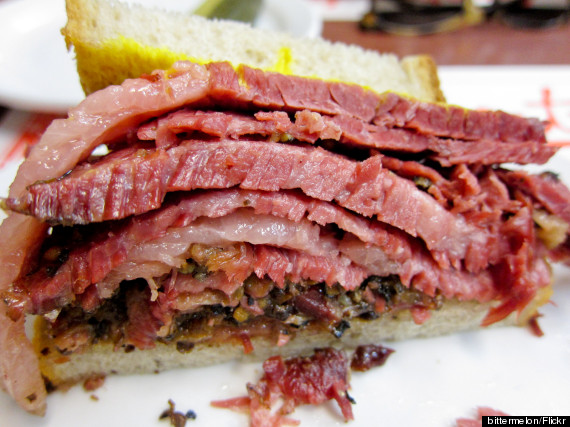 Montreal is the turbulent melting pot of French and English Canada, but there are five things they will never need to fight over: beer, bagels, poutine, hockey and smoked meat. We have the large Jewish population to thank for the bagels and smoked meat, which any proud Montrealer will declare are the best in the world. Poutine’s exact origins are unclear, but it’s generally agreed that we have a rural Quebecer to thank for first pouring gravy and cheese curds over fried potatoes and inaugurating a greasy late-night snacking tradition. 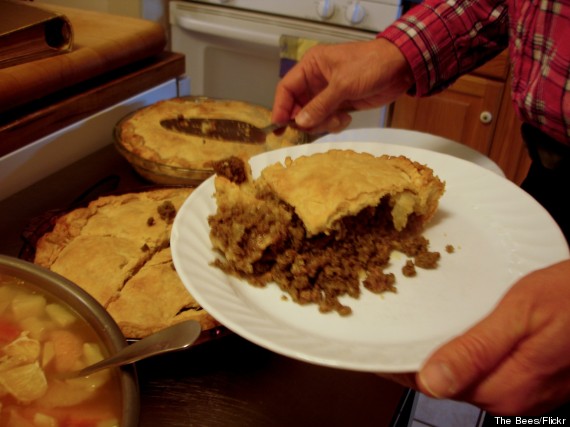 French Canada’s other hub of culture and cuisine is known for two foods in particular. The first is derived from the sap of maple trees, which can be distilled to create maple sugar. Sold either in tooth-rotting blocks of deliciousness, or melted and poured over snow to create a sticky, frozen treat, maple sugar helps Canadians survive their long winters. The second food is called tourtiere, a traditional French-Canadian meat pie. Pork, beef and veal are common fillings, but venison, rabbit and salmon are sometimes incorporated as well. 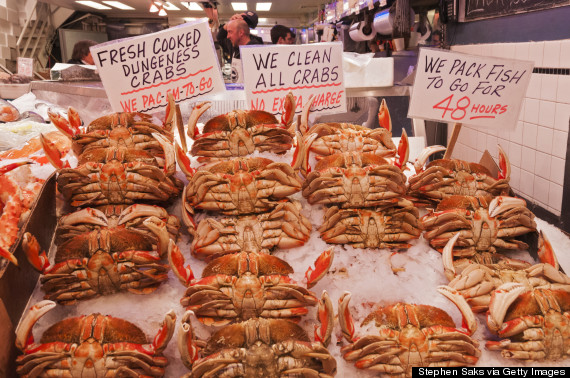 The home of Starbucks is of course famous for its Joe, with coffee shops seemingly dotting every corner and the smell of fresh roast pervading the air morning, noon and night, but there’s a local delicacy, found all over the West coast but perfected, so the locals claim, in Seattle: Dungeness crab. Some 35 to 55 million pounds of the crab are harvested off the coast each year, and it’s been consumed in the region for as long as people have been recorded as living there. Its historical and cultural importance, combined with its versatility -- it can be served in stews, pastas, sandwiches or in any other imaginable format -- have made it an iconic food in Seattle. 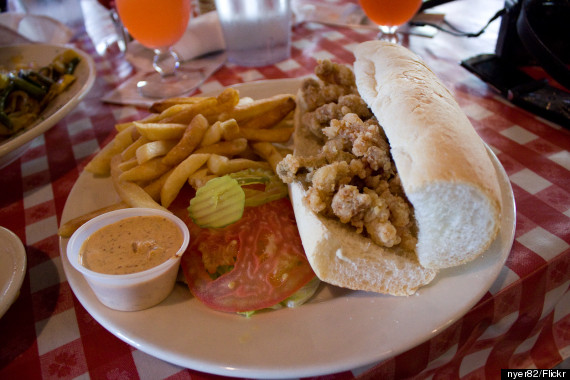 New Orleans is known for many things, and many exotic foods, but the Po’boy sandwich must be the most widely recognized and best loved. Served on a French bread (often a baguette) with meat (crab or roast beef are the most popular), it’s been a staple of the Big Easy’s culinary palette since 1929, when the Martin brothers, Benny and Clovis, opened a sandwich shop to cater to striking streetcar workers, who were referred to as “poor boys” and took a liking to this style of sandwich. 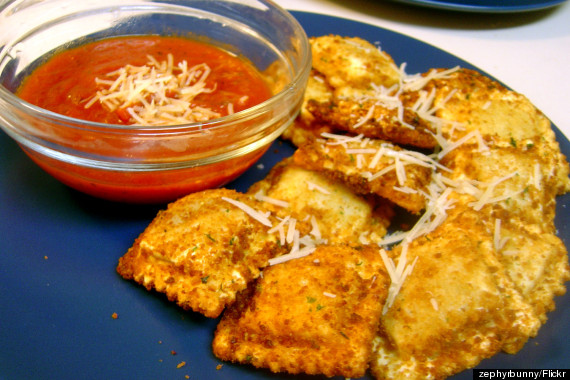 Although it’s possible that toasted ravioli has its roots in Sicily, it is most popularly believed to have been invented in “The Hill,” an Italian neighborhood in St. Louis. It is generally served with marinara sauce and cheese sprinkled lightly on top, and may or may not contain meat. 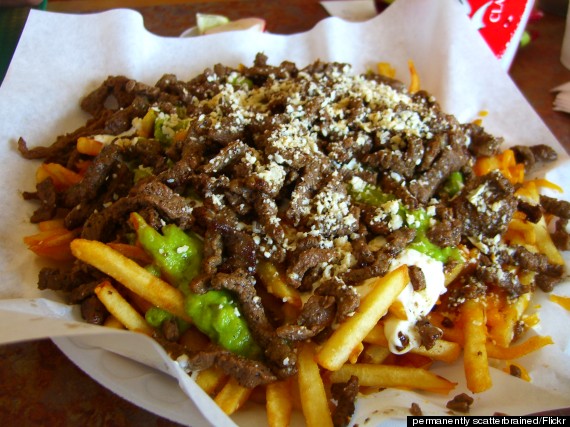 America is known for its cultural imperialism: What it can’t eliminate with fast food and reality television, it assimilates. The San Diego dish known as carne asada fries is a perfect example: how can you improve on guacamole, carne asada, sour cream and cheese? Add french fries, of course! 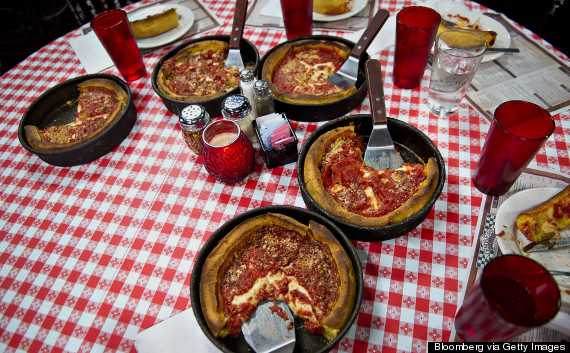 While New Yorkers and Chicagoans rage on over which city has the better pizza, we get to enjoy the best of both worlds. Chicago’s famous deep-dish pizza, with crusts up to 3 inches tall, was invented at Pizzeria Uno in 1943, and has been helping to quell hunger pangs and fuel city-vs.-city feuds for over 70 years. Not bad. 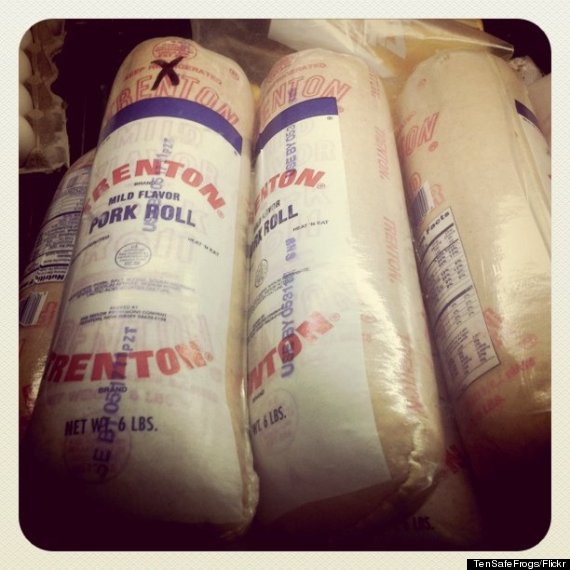 Developed in 1856 by Trenton’s own John Taylor, pork rolls -- really stacks of minced ham -- have become popular all over North America, but only in Trenton will you find them served morning, noon and night, eaten as snacks, served at diners or restaurants or truck stops. 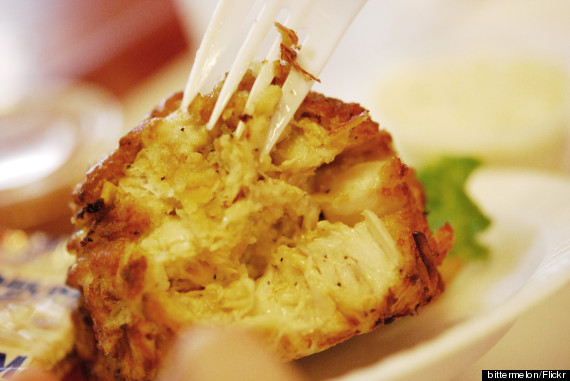 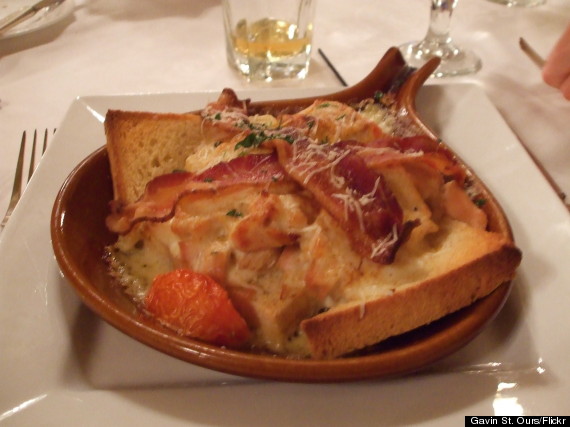 This open-faced sandwich made with turkey and bacon was invented in Louisville, nearly 100 years ago, where it was first conceived as an alternative to late-night ham-and-egg suppers. It’s often spiced up with tomatoes, mushroom slices and even canned peaches, but if you’re looking for authenticity, order it with Mornay sauce, parmesan cheese, pimento and bacon strips. 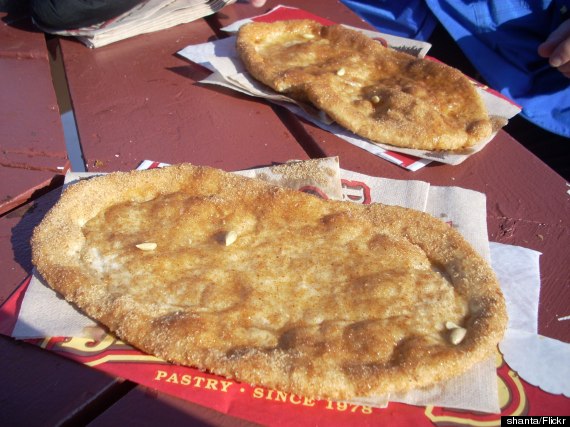 If you’re ever in Ottawa and have an insatiable craving for a sugary treat, try a Beaver Tail. They’re made of a fried dough base garnished with your choice of toppings: melted chocolate, maple sugar, cinnamon, sliced bananas or peanut butter. Heaven. 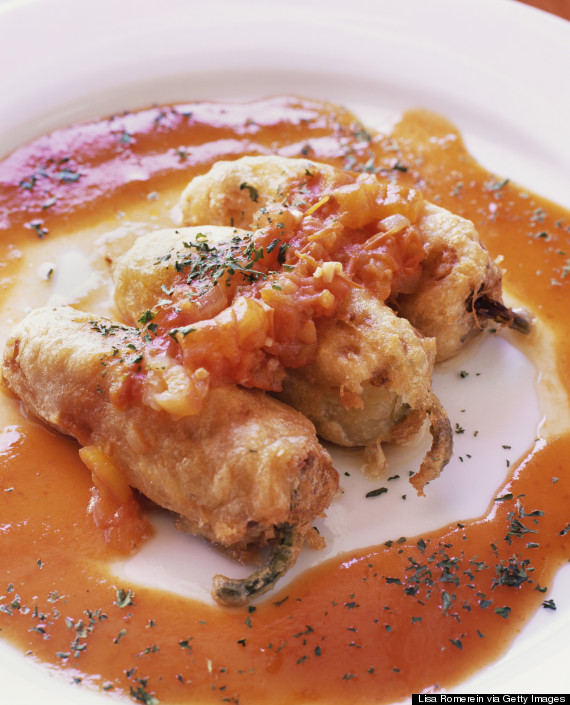 Chile Rellenos is a traditional Mexican dish, first made in Puebla, but it has taken on a whole new level of popularity in Albuquerque, where it is served with Monterey Jack cheese and green or red chile sauce. 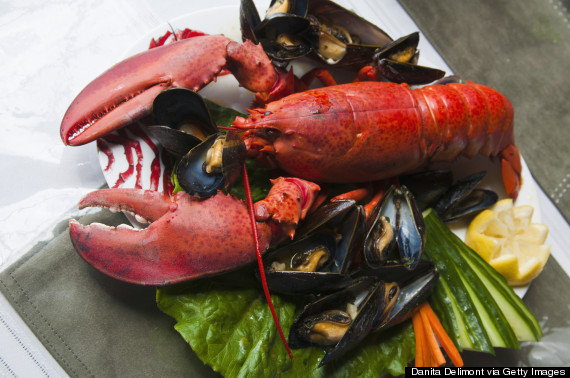 Canada’s Prince Edward Island is not, in fact, a city but a province unto itself -- but it’s so small and sparsely populated that it may as well figure on this list. Apart from the beautiful ocean views and many golf courses, tourists come to PEI for the seafood, and particularly the lobster. 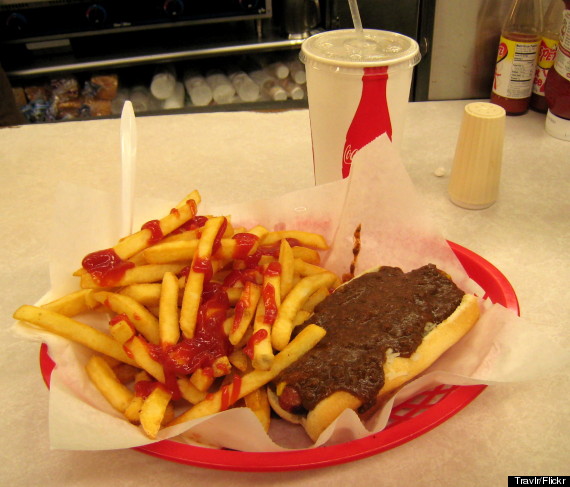 Famous in Washington, the half-smoke might appear, to the untrained eye, to be a simple hot dog. Instead, it’s a half-pork, half-beef jumbo dog, smoked to perfection and served with herbs, onions and chili sauce. Even President Obama has been known to take time out of his busy schedule to visit the best half-smoke joints in the city. 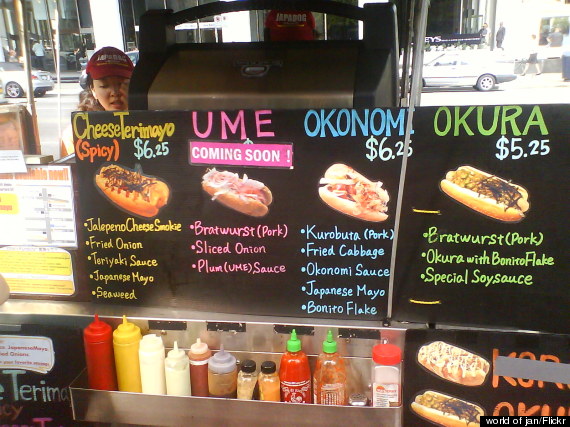 The Japadog is a chain of street food stands and restaurants that began in Vancouver and has since expanded to New York City. They serve hot dogs with a Japanese twist, by including variations on traditional Japanese foods like tonkatsu, teriyaki or yakisoba. 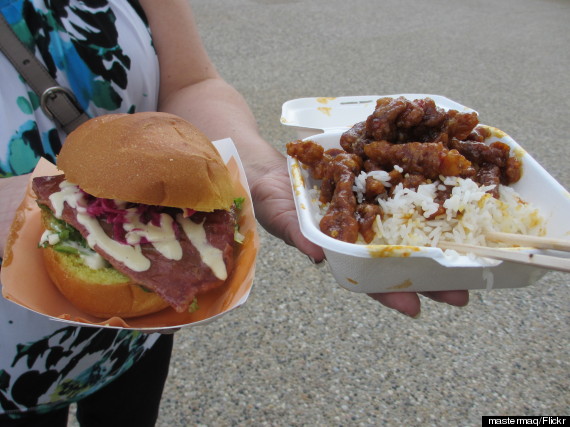 Alberta is Canada’s answer to Texas, particularly where prime cuts of steak are concerned, so it’s no surprise that Calgary’s most popular dish is meat-based. Strips of beef are deep-fried and coated in a sugar-and-vinegar sauce, and flavored with ginger, garlic and hot peppers. Not to be missed if you’re ever in Calgary, where it was invented and perfected. 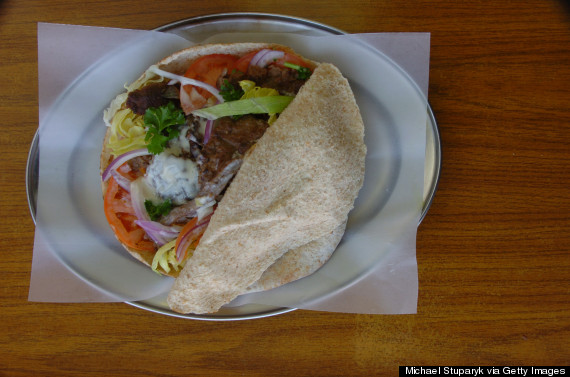 If you’re ever in Halifax after closing time, when the locals and the students all gather for one last gorging before the next-day hangover, you’ll see a curious dish amongst the late-night staples like pizza, hot dogs and pre-made sandwiches: the donair. It’s an ode to meat, a sandwich made from spicy ground beef, served on a pita with raw onions and tomatoes. But the real gem is the donair sauce, a blend of evaporated milk, garlic and vinegar that has to be tasted to be believed. 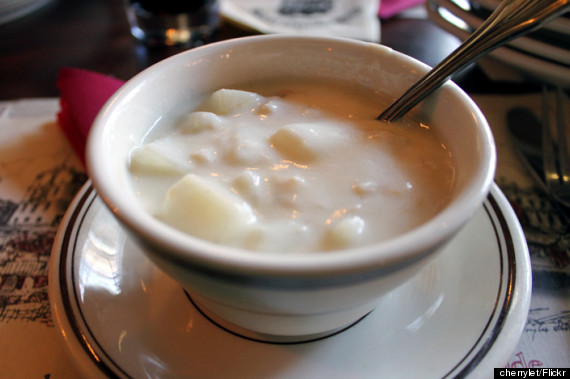 There are many variants on clam chowder, but none more famous than Boston clam chowder, made with potatoes, onions and clams, and served at a thicker consistency than other chowders. 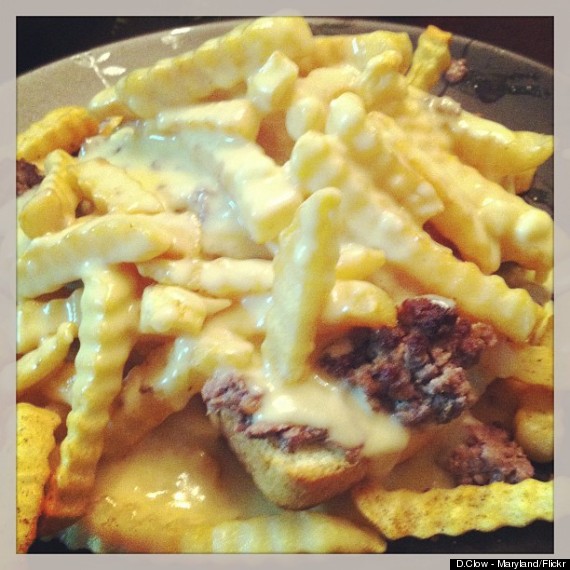 A candidate for least healthy meal on this list, the horseshoe sandwich is a large slice of bread or hamburger patty topped with meat, topped with french fries and smothered in a cheesy sauce. In the rest of the country, this is called a heart attack; in Illinois, it’s breakfast. 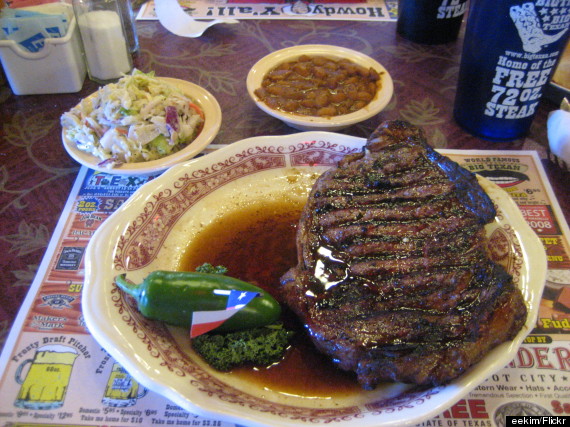 It’s no secret that Texans love their steak, but it takes a special person to polish off the famous 72-ounce sirloin monster served up in some of Amarillo’s most famous steakhouses. 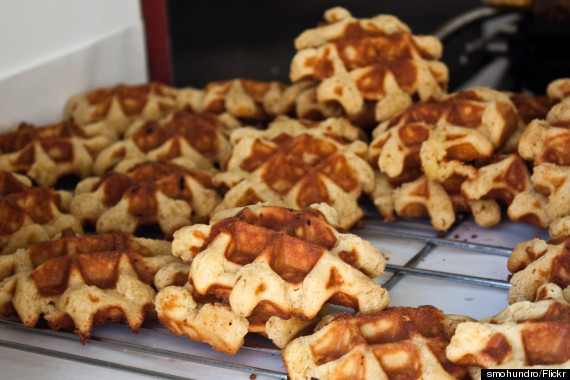 Waffles are loved the world over, but Belgium, and Bruges in particular, have a special claim to this delicious treat. Belgium waffles are noticeably lighter and crisper, with larger pockets, than their European and American counterparts. 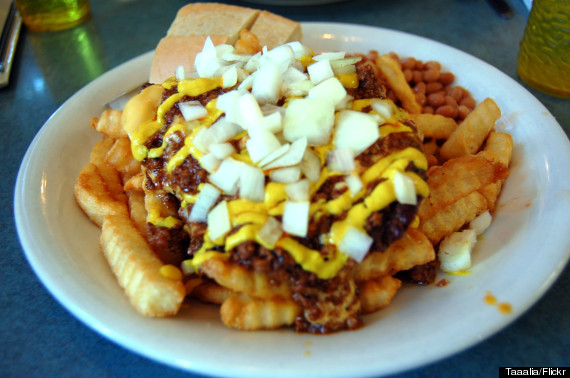 The earliest version of the famous garbage plate dates back to 1918, when it was called “Hots and Potatoes” by customers, but the underlying concept has changed little: a plate piled high with beans, potatoes, hot dogs, onions, mustard and chili. The resulting dish looks about as appetizing as a plate full of garbage, hence the name, but it’s a surprisingly delicious meal.

Head over to AskMen to see the rest of the list!