In 2008, Citigroup was an ailing financial giant on the verge of collapse, an event only averted, most economists agree, by a huge emergency infusion of taxpayer money.

Yet when it came time to share the spoils of its return to good fortune with the U.S. government, the bank was not so generous. Over the next four years, Citigroup aggressively moved to make use of shelters in order to shield its earnings from U.S. taxation, doubling the amount of money it held offshore, according to a new report by the U.S. Public Interest Research Group, a nonprofit that advocates for corporate tax reform.

Citigroup is hardly alone in shifting profits to places like the Cayman Islands as a way to lower a tax bill. According to the report, 82 of the top 100 largest publicly traded companies as measured by revenue have set up such shelters -- 2,687 of them, to be exact. All told, they are holding nearly $1.2 trillion offshore.

But even among those that make frequent use of tax shelters, Citigroup is in a special class. The bank is one of 15 U.S. companies that are collectively responsible for two-thirds of this total, according to the report, which is called "Offshore Shell Games."

Citigroup has the ninth-most money parked offshore, the report found. (The top three companies, in terms of tax avoidance, are General Electric, Apple and Pfizer, which collectively held $263 billion offshore as of 2012.)

Mark Costiglio, a Citigroup spokesperson, defended Citigroup's tax strategy in an email to The Huffington Post on Tuesday.

“Citi operates in 101 countries globally, employing tens of thousands of local residents in the countries where we do business. Citi strictly abides by all tax laws in the United States and throughout the world," Costiglio wrote. "In 2012, Citi paid more than $3 billion in payroll taxes and more than $90 million in use tax, personal property and real property taxes in the U.S."

Under the current tax system, U.S-based companies are on the hook for paying a 35 percent corporate tax on foreign income, but can deduct tax payments made overseas. So, for example, a subsidiary of an American company taxed at a 22 percent in Great Britain would pay an additional 13 percent on that income when repatriated.

But companies have found endlessly clever ways to avoid paying that bill. Apple, for example, uses a technique that accounts have dubbed the "Double Irish With a Dutch Sandwich." The maneuver is complicated, but essentially it allows the tech company to move profits through Ireland, the Netherlands and then on to a tax haven in the Caribbean in order to lower the U.S. tax bill.

"What we are trying to show is that these tax loopholes create winners, and even bigger winners," said Dan Smith, tax and budget advocate at the nonprofit, and an author of the report.

Over the last three years, Apple, Google and Microsoft have used techniques like this to avoid paying taxes on $80 billion in profits, a recent Senate subcommittee on investigations found.

The tax rate paid on offshore cash by the 21 companies that disclosed that information was just 6.9 percent, according to the report. The estimated deferred tax bill based on this limited data -- meaning money held offshore indefinitely -- was $93 billion.

Meanwhile, many of these same companies are deploying lobbyists to argue for their fix to the tax dilemma: allow them to bring back to the U.S. any and all profits once a foreign tax bill has been paid. Critics have blasted this approach as making it even easier for U.S. companies to shift profits from high-tax countries to tax havens.

In May, Apple's chief executive, Tim Cook, testified at a hearing before the Senate Subcommittee on Investigations. He insisted that the company had abided by all tax laws, in the U.S. and abroad.

Many of the same companies that are shifting their money offshore also often benefit from U.S. tax breaks. The last time Congress overhauled the tax code was 1986. Since then, Congress has added in tax breaks and loopholes worth hundreds of billions of dollars to corporations that lobbied for them. Recently The Huffington Post reported on the origins of one of those breaks, a "manufacturing" deduction that lobbyists stretched to encompass public utilities, oil companies and even coffee roasting.

An effort led by Sen. Carl Levin (D-Mich.) to eliminate the loopholes that permit companies to store huge sums of cash overseas has stalled out, now frozen in the same partisan traffic jam that has essentially brought Washington to a standstill. 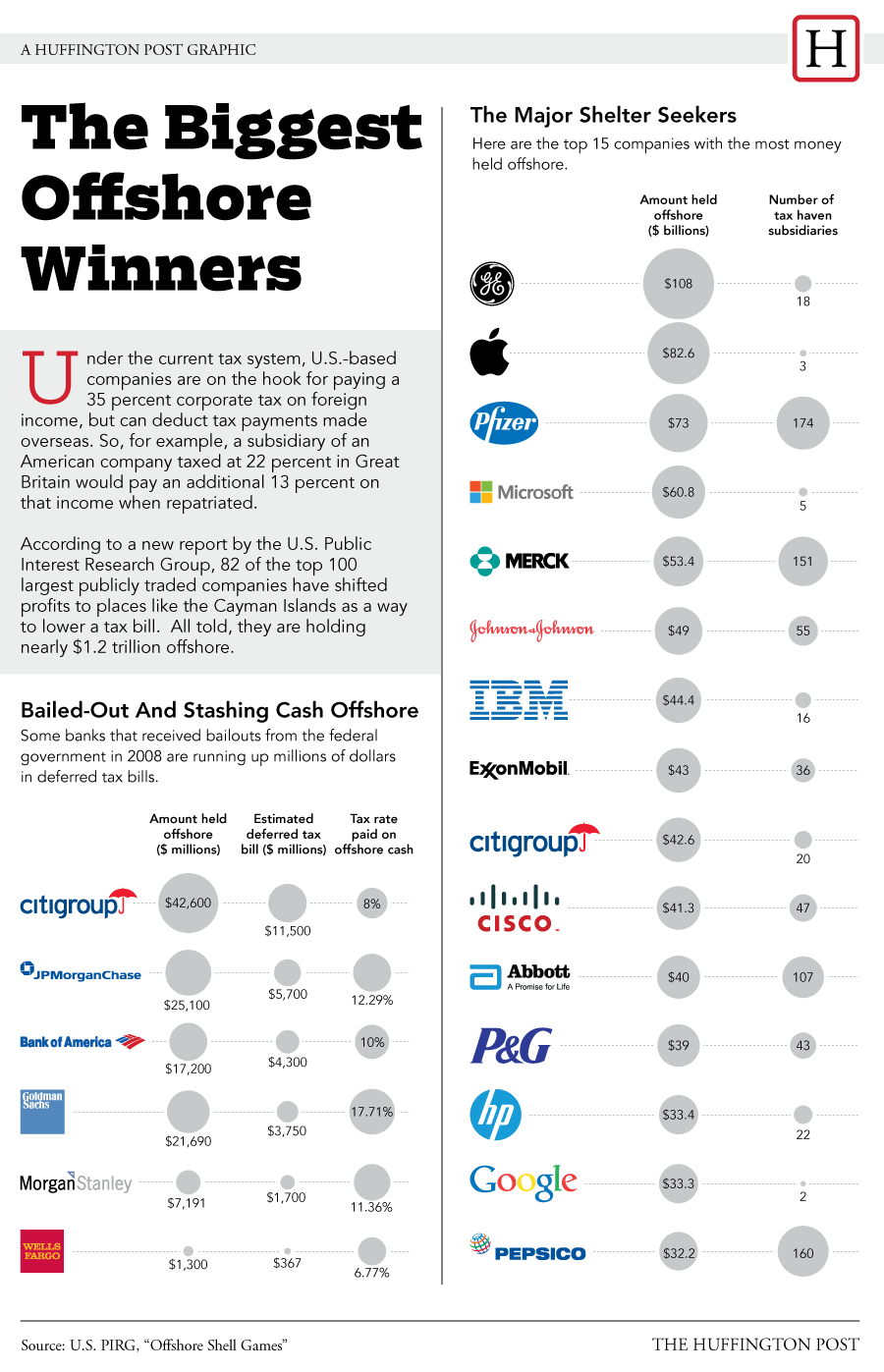 Citigroup Avoided Paying $11.5 Billion In Taxes Thanks To Tax Shelters
The Most Outrageous Corporate Tax Loopholes