In the anniversary year of the Morrill Act which created land grant colleges, signed by President Lincoln 150 years ago, it is worth looking at what this tradition might mean for the 21st century.

Land grant colleges once promoted citizenship throughout the curriculum that combined "practical studies" and "liberal arts." Graduates saw themselves as working, in their jobs not mainly off-hours, as citizens with other citizens in communities. As John Hannah, President of Michigan State put it in 1944 in an address to the Association of Land Grant Colleges and Universities, "Our colleges should not be content with only the training of outstanding agriculturalists, or engineers, or home economists, or teachers, or scientists, or lawyers, or doctors, or veterinarians... the first and never forgotten objective must be that every human product of our educational system must be given the training that will enable him to be an effective citizen...." 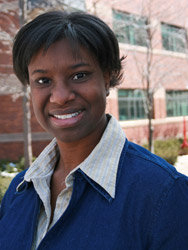 Dr. Shonda Craft, Assistant Professor in the Department of Family Social Science at the University of Minnesota, a land grant university, helps revive this tradition for the 21st century. Craft's research focuses on health disparities using community-engaged models, with an emphasis on sexual health.

Boyte: How did you get interested in citizen professionalism?

Craft: The key moment was when I was in transition from being an undergraduate to graduate student. As a psychology major in college, working with adolescents detained in the criminal justice system, I was interested in the home lives and communities that kids were coming from. I had a long history of community experience. I was able to take community experience and bring it into therapy, which I saw as not just about applying a theory, or symptom reduction. I was thinking about what is my impact on this person's family. I became wellness minded. My definition of health started growing. I sought out others for conversations about how professionals could think outside of box, how they could work in ways more integrated within the community.

Boyte: Was there resistance?

Craft: "Some advisers in graduate school saw what I was doing as 'volunteer work' and argued that I should focus more narrowly on academic studies. But I learned to advocate for myself and develop a narrative about community engagement. I always wanted to make a difference. I disagreed with the idea of being a detached scholar."

Boyte: What is citizen professionalism?

Craft: The Citizen Professional model, developed by Dr. William Doherty [Professor, University of Minnesota], is a way of engaging professionals and community members to collaborate without the typical hierarchical relationships. It also addresses issues traditionally defined as individual problems from a more community-focused perspective.

Citizen professional is who I am. Just because I have an advanced education does not remove me from community, shouldn't keep me from being grounded, or connected to people without similar credentials. It means people taking their strengths and applying them in new areas. People have different things to contribute. For me it's also about language, how do you define community. I don't agree with defining community as a place to study or a 'target population.'

Citizen professionalism is a way of life. If that looks like I'm bucking a trend, it comes naturally.

Boyte: Would you describe the SMART group you've helped to organize?

Craft: Today's conversation about teen pregnancy is rife with finger-pointing. It emphasizes low self-esteem and uncontrolled hormones, parents with poor monitoring skills, or schools who have usurped the moral duties of families to peddle condoms and eschew abstinence. Recent movies such as Juno and television shows such as 16 and Pregnant have popularized, even idolized teen pregnancy.

I worked with a group of teens and professionals to launch a project based on a more community-focused perspective. In March 2009, the Citizen Teen Pregnancy Prevention Project began at South High School in Minneapolis. It was an attempt to provide 'proof of concept' that a democratic model of citizen professional work, typically utilized with adults, could also be successful with young people. The 'citizen teens' included female and male students who had been identified by their teachers as leaders in the school. The 'citizen professionals' were representatives from University of Minnesota, school social workers, and community health advocates who served as facilitators of the process.

The adults participated alongside the teens in deep conversations about how teen pregnancy impacts girls, boys, children, families, and communities. Initially, the girls group and the boys group had separate conversations. Then the groups joined and began to formulate a set of messages and strategies for sharing their work with others. They dubbed the group SMART (Sexually Mature And Responsible Teens), which set the tone for how these citizen teens would be described by adults and peers who witnessed their action steps and heard their messages. "SMART shared messages such as:

• Teen pregnancy is a problem for teens, children, families, and communities.
• Know what kind of relationship you want and deserve.
• You might think you are ready for sex, but are you ready for the consequences?
• There are other ways to show love besides sex.
• Consider abstinence as an option, and you can say 'no' at any time.

The project drew to a close in April 2012, and ended on a high note. The teens appeared on a local radio program focused on health issues, were interviewed for a story that was aired on Minnesota Public Radio, and told their stories for a forthcoming DVD being produced by the University of Minnesota that chronicles their work.

Boyte: What have you learned? What's next?

Craft: Clearly, this project is proof that teens are ready, willing, and able to maturely discuss and act on teen pregnancy. The SMART group wants to regenerate this. A key lesson is that as much as we tried to be collaborative, we didn't consult the power structures enough. People in power in the school weren't familiar with our group, how it worked, and that created tension. We learned the importance of paying attention to the politics of the environment.

The Citizen Professional model is important to make visible in school cultures. Young people and parents need real power and voice, not surface power. Moving forward, I would like the citizen professional model to help create space for power.

Harry Boyte is National Coordinator for the American Commonwealth Partnership, Director of the Center for Democracy and Citizenship at Augsburg College and a Senior Fellow at the Humphrey School of Public Affairs.