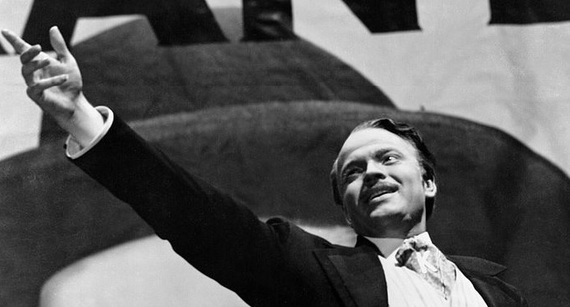 A fleshy-faced man stands in front of an enlarged image of his own face, spreads his arms, smiles at the adoring crowd, and proclaims, "Every straw vote, every independent poll shows that I will be elected. I know, it does seem too good to be true."

Earlier, he had explained, "It is my duty to see to it that decent, hard-working people of this community aren't robbed blind by a pack of money-mad pirates. I'm the man to do it. I have money and property. If I don't look after the interests of the underprivileged, maybe somebody else will, maybe somebody without any money or property and that would be too bad."

Donald Trump? No, Charles Foster Kane, fictional protagonist of the 1941 classic Citizen Kane. Such Trump-like statements fill the film, consistently voted the number one movie of all time and celebrating its 75th anniversary this year.

Both Donald Trump and Charles Foster Kane are brilliant, aggressive salesmen, willing to say whatever they believe no matter who feels offended—and don't ever expect either to apologize. The trademarks for each are certainty, disdain for nuance, and a disregard for complexity, facts, and even truth. Both are creations of the media and masters of it; larger than life and armed with a boldness untempered by conventional political caution, enabling them to say those things many may feel but few can publicly admit. Both are former liberals turned self-proclaimed conservatives, offering broad populist promises but few specific policy positions. Kane and Trump: brash, lacking shame, and eager to break accepted rules--outsiders eager to attack party leaders:

... politicians are all talk, no action. Nothing's gonna get done. They will not bring us to the promised land. They will not.... I watch the speeches of these people, and they say the sun will rise, the moon will set, all sorts of wonderful things will happen. And people are saying, "I just want a job. Just get me a job. I don't need the rhetoric. I want a job."... I will be the greatest jobs president that God ever created.
—Donald Trump declaring his presidential candidacy in June 2015

That Charles Foster Kane exists today in the guise of Donald Trump is something I would love to discuss with my friend Frank Mankiewicz, who served as a confidant to top Democratic leaders including Robert F. Kennedy. Frank was also the son of Citizen Kane screenwriter Herman Mankiewicz.

Frank spoke with his "Pop" after Herman finished the first draft of Kane, attended the movie's premiere with his parents, and listened with them to the radio broadcast of the 1941 Academy Award where Herman was awarded the Oscar for Best Original Screenplay (Frank's parents danced around the living room). Eventually, Frank came to realize that underneath his father's bluster—he was most famous for drinking and taunting studio executives—Herman, at times, took movies seriously. Famously, Mankeiwicz modeled the character of Kane on newspaper magnate William Randolph Hearst, well-known for his extreme political conservatism, but it is no coincidence that Mankiewicz created Charles Foster Kane in 1940, a year in which German "exceptionalism" threatened to overwhelm Europe and Wendell Wilkie, a business executive with no prior electoral experience, had defied the political machine and seized the Republican presidential nomination on a wave of passionate public support.

In the process of writing his memoirs, Frank and I discovered that in 1933, the same year Adolph Hitler came to power in Germany, Herman Mankiewicz wrote and began fundraising for a satirical film entitled The Mad Dog of Europe. Further evidence of Herman's belief that movies could change mind, Mad Dog featured an absurd fictional leader in a fictional European country clearly meant to invoke Hitler and Germany. In Mad Dog, Herman hoped to achieve what Citizen Kane has become for us today: a "fictional" story that provided insight and commentary on current events.

With pure Mankiewicz humor, the screenplay for Mad Dog began with a message in capital letters: "THE INCIDENTS AND CHARACTERS IN THIS PICTURE ARE OF COURSE FICTITIOUS. IT IS OBVIOUSLY ABSURD TO ASK ANYONE TO BELIEVE THEY COULD HAPPEN IN THIS ENLIGHTENED DAY AND AGE."

That movie was never made. (Hollywood did not produce its first anti-Hitler movie until long after World War II began.)

Citizen Kane features no such disclaimer, but it is clear that satirizing the emotional, mindless appeal of fascism had remained on Herman Mankiewicz's mind. Written after World War II had begun in Europe, the film includes a fake newsreel of Kane standing alongside Hitler and Gestapo-founder Hermann Goering.

So how does such an "absurd character" as Presidential Candidate Donald J. Trump come to exist in what should be an even more "enlightened day and age" than Hermann's? Far beyond the circumstances of 1940 or the present moment, men like Kane and Trump are very much part of the American way. At play here—as Frank and I often discussed—is the way that media has tangled the American people tighter and tighter into new versions of "reality." Thomas Jefferson and Abraham Lincoln worried about the slant newspapers put on their politics (Jefferson once declared that "the man who reads nothing at all is better educated than the man who reads nothing but newspapers"). Franklin Roosevelt, worried about his portrayal on the radio, actively co-opted this form of media with his fireside chats. John F. Kennedy showed us how television could be used both to win elections and to govern. Ronald Reagan taught us that the line between real life and the movies was thin indeed. Seen from this perspective, the reality show that is the Trump campaign has arrived right on schedule. In an age where television news networks actively embrace ideological slants and rancorous debate between pundits is not only expected but courted, we have grown accustomed to the idea that "facts" are not necessarily true and the power of persuasion is achieved not through objective rationality but by making the most noise.

Seen this way, the most important truth about Trump will not be his eventual electoral fate, but what he represents about our citizenry and our political process. And, while today's candidates may be louder and more absurd than ever, these are not new revelations. As Citizen Kane shows, any nostalgia we may feel for a golden age of unbiased and fact-based political coverage is a fallacy. In Citizen Kane, Hermann Mankiewicz never pulled back the camera to reveal this bigger picture, instead leaving it to viewers to draw their own conclusions about the dangers posed by putting a media man on the campaign trail. But his use of the authoritative newsreel voice throughout the film—in many ways a precursor to the seductive certainty of people like Trump—along with the fact that Kane's campaign was eventually derailed by a sex scandal, shows us that Hermann clearly knew where the relationship between politics and the media was headed.

In the film's most famous scene, as the larger-than-life Kane dies—alone and discredited—he murmurs the now-iconic word "Rosebud," which has since acquired a life of its own. These days, to find a Rosebud means to discover some hitherto unknown or ignored fact that, once exposed, unlocks a great mystery about a person.

Hollywood lore is filled with stories as to why Herman Mankiewicz chose "Rosebud" to fill that role, but Frank told me that the source of the famous utterance was well-known within the family: his father was among the first in Hollywood to be psychoanalyzed and, during his sessions, he found himself focusing on a bicycle he had received as a gift when he was ten years old. On the very first day young Herman rode it, the bike was stolen from in front of the Wilkes-Barre, Pennsylvania public library and, to teach him responsibility, his parents decided not to get him another one. Rosebud was the brand of the bike.

"Donald Trump has become America's Rosebud," I want to tell Frank. "He and his campaign have shown us what we must understand in order to understand ourselves. His 'Make America Great Again' slogan touches something deep within the American people, and until we address it, this Trump will only be followed by a bigger, louder Trump." But I can't say this to Frank, who died last year, just before his 90th birthday.

Speaking from within me, Frank says in response, "It was just a movie," and then reluctantly agrees that Kane foreshadowed Trump, and that Kane-Trump does indeed force us to think about the larger, technology-driven changes in our society that have given rise to a slew of ever more confident, combative, and downright noisy media-men while also allowing them to invade our homes, our minds, and the political arena. Frank would then go through the same stages as many of us when it comes to Donald Trump. First denial, then amusement, followed by fear and resignation, and, finally, the difficult realization that Trump, like Kane, is far more than an aberration.

Frank Mankiewicz (1924-2014) was a public relations consultant, lawyer, writer and journalist. He is best known as Robert F. Kennedy's press secretary but also as the president of NPR, regional director of the Peace Corps, and George McGovern's campaign director. Dr. Joel L. Swerdlow is an author, editor, journalist, researcher, and educator. A senior writer and editor at National Geographic for 10 years, his published works include To Heal a Nation: The Story of the Vietnam Veterans Memorial.