WASHINGTON -- Pushback against the Supreme Court's Citizens United decision keeps growing in the states. Over the first six months of this year, even as campaign finance reforms go nowhere in Congress, five more states have backed resolutions calling for a constitutional amendment to overturn the 2010 ruling. That brings the total number of states supporting an amendment to 16.

"Amending the Constitution is hard -- and it should be," said Sen. Tom Udall (D-N.M.), who has himself sponsored a proposal to constitutionally overturn Citizens United and other campaign finance-related court decisions. "But it is not impossible, especially with the growing momentum we are seeing. Sixteen states, including my home state of New Mexico, have called on Congress to overturn Citizens United and send them an amendment for ratification. That’s more than 30 percent of the U.S."

Fighting back against the flood of electoral spending released by the Citizens United decision, lawmakers and policymakers have also worked to change state-level campaign finance laws. They have expanded disclosure requirements to reveal "dark money" and, much to the dismay of reform advocates, increased the sums that political candidates can raise for their own campaigns. At least seven states have made changes so far this year.

These efforts are driven by both public opinion -- 62 percent of Americans oppose the Citizens United ruling -- and the increasing pressures faced by candidates as they see independent spending flooding into their elections.

The majority of the organizing following the 2010 decision -- which opened the door for unlimited independent political spending by corporations, unions and, following a subsequent decision, individuals -- has gone into the difficult task of overturning Citizens United with a constitutional amendment. This year, Delaware, Illinois, Maine, Oregon and West Virginia have sent resolutions to Congress calling for an amendment, making the total 16 states and hundreds more cities and towns in support. 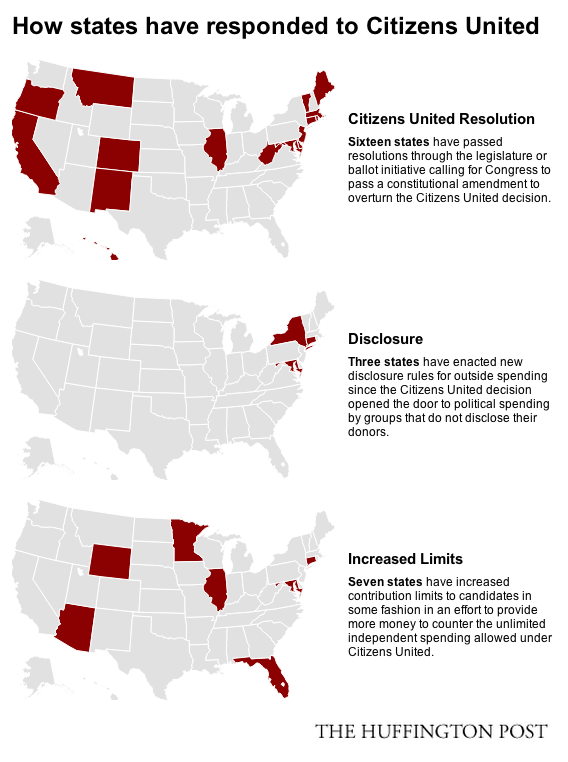 "As more states pass resolutions, it shows the increased interest and activism at the grassroots level," said Rep. Ted Deutch (D-Fla.), another sponsor of a constitutional amendment to overturn Citizens United. "These resolutions don't come out of thin air. They come because of really committed activists showing up at their city council and their county commission and their state houses to push for them. And that's grassroots in its truest sense."

The resolution campaign has not just expanded geographically: Although the effort has primarily been backed by Democratic legislators, support from Republican lawmakers has increased markedly in 2013. All five statewide resolutions passed this year received substantial support from Republicans in at least one legislative chamber. Oregon, the most recent state to pass a resolution, saw the majority of its state GOP House members vote for the bill.

"The fact that that bipartisan support is materializing not just in the general public but among elected officials is a tremendously exciting and important development," said Peter Schurman, campaign director for Free Speech for People, a group mobilizing grassroots activism to pass the resolutions.

The support now coming from Republican legislators was previously seen among Republican voters in two ballot initiatives passed on Election Day 2012. In Montana, where voters gave GOP presidential candidate Mitt Romney 55 percent of the vote, 70 percent supported the initiative calling for an amendment to overturn Citizens United. A similar initiative in Colorado received more than 70 percent support, easily outpacing the 51.5 percent of the vote that went to President Barack Obama.

With the majority of state legislative sessions now ending, amendment supporters are looking to take their successes to Washington this summer.

"What we're doing this summer is getting the entire congressional delegation, as much as possible, in the states that passed resolutions to support an amendment," said Aquene Freechild, senior organizer for Public Citizen's constitutional amendment campaign.

Public Citizen will be joined in pushing those congressional lawmakers by MoveOn.org, People for the American Way and other groups.

"It is really important to us that the political will manifested in the states is seen in Congress," Freechild said.

Although a constitutional amendment has been the main focus, state-level campaign laws are also being rewritten for the post-Citizens United world. The majority of the changes, however, have increased the amount of money that candidates are allowed to raise for their campaigns rather than closed major disclosure loopholes created by the Supreme Court's decision.

The bill in Minnesota that raised contribution limits was originally paired with greater independent spending disclosures, but the latter provisions were dropped in the face of opposition from too many legislators.

Before the Minnesota bill was stripped of its disclosure provisions, state Rep. Ryan Winkler (DFL-St. Louis Park), the bill's chief sponsor, told HuffPost that "candidates' ability to have a voice in their own election and to be able to talk to voters is severely undermined" because of the exorbitant sums spent by independent groups empowered by Citizens United.

New York is the only state to establish new disclosure requirements without raising contribution limits for candidates. The state did so by creating new rules outside the legislative process: New York Attorney General Eric Schneiderman enacted a new disclosure regime through his office's regulatory power.

Both Texas and Montana have seen bipartisan support for disclosure legislation, but the measures have still been blocked. In Texas, a disclosure bill passed both chambers of the state legislature, only to be vetoed by Gov. Rick Perry (R). In Montana, a disclosure bill that would also increase campaign contribution limits was supported by both Republican Senate president Jim Peterson and Democratic Gov. Steve Bullock, but faced enough GOP opposition in both chambers that it could not advance. Peterson and other pro-disclosure Republicans are now backing a ballot initiative campaign to put the issue before voters in 2014.

While these states struggle to overcome obstacles to reform, California appears to be on track to become the fourth state to close the Citizens United disclosure loopholes. A bill passed the state Senate in May and awaits consideration in the state Assembly.

CORRECTION: An earlier version of this story omitted one state -- West Virginia -- that also passed a resolution calling for a Citizens United constitutional amendment this year.