Tuesday marks the 10th anniversary of Chief Justice John Roberts taking the helm of the Supreme Court, and as academics and journalists look back on the cases that defined the past decade, none loom larger than the 2010 decision in Citizens United v. Federal Election Commission.

Americans are pretty much of one mind about that ruling. By and large, they despise it.

In a recent Bloomberg poll of 1,001 adults, Citizens United -- which paved the way for the rise of super PACs and other forms of political spending -- was viewed unfavorably by 78 percent of respondents, who said the decision was so bad it should be overturned.

A legal scholar was beside himself over the findings.

"Wow. Wow. I'm stunned," University of Chicago law Professor David Strauss told Bloomberg. "What it suggests is that Citizens United has become a symbol for what people perceive to be a much larger problem, which is the undue influence of wealth in politics."

Pollsters asked participants what they thought about a number of controversial decisions by the Supreme Court, including recent rulings on same-sex marriage and Obamacare. On those cases, Americans were more divided.

But on the issue of outsize political spending by corporations and unions, a clear consensus emerged: 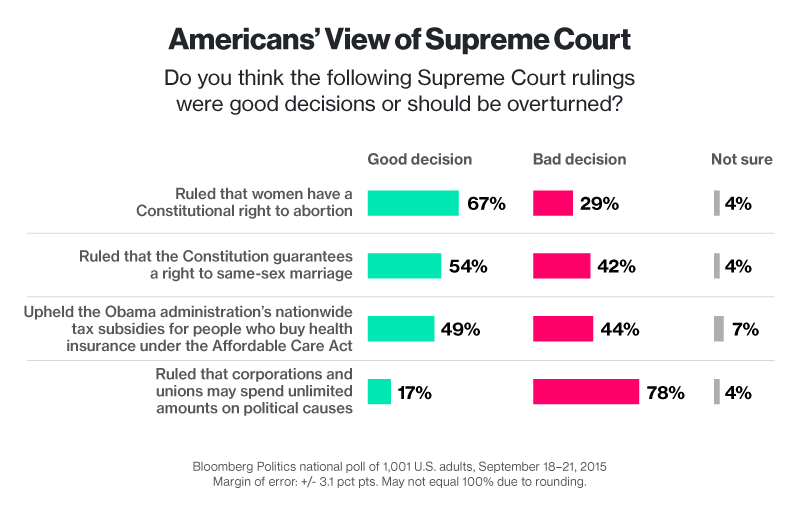 Curiously, the Bloomberg poll did not identify these cases by name, but by a description of what, broadly, each one decided. Even so, most respondents looked unfavorably on the money-in-politics ruling, with 80 percent of Republicans and 83 percent of Democrats opposing it, according to poll figures.

A professor at Ohio State suggested that a more charitable characterization of Citizens United -- perhaps one that framed the case as being about free speech -- might have yielded different results.

"It would be interesting to see what the breakdown of opinion would be if a question described the court as ruling that individuals and organizations have a First Amendment right to spend money on campaigns as they see fit," political scientist Lawrence Baum told Bloomberg. "There might be considerably more support for the decision."

But in a different part of the poll that asked respondents where they stood on certain campaign issues, 87 percent said they agreed that campaign finance rules should be reformed so the rich don't out-influence the poor.

That may not be so easy: Citizens United established a new constitutional interpretation of the First Amendment, and thus it can only be undone by a constitutional amendment or a new decision that overrules it. Either possibility is a long shot.

Still, the justices themselves are not unaware that Citizens United remains unpopular.

In January, on the fifth anniversary of the Citizens United ruling, a group of protesters smuggled a camera into the main Supreme Court chamber and railed against the decision. The disrupters were escorted out by court police and charged with federal offenses, but a video of the protest ended up on YouTube.

Roberts, for his part, may not actually be fully committed to the money-as-speech principle of Citizens United.

In an April ruling dealing with judicial campaign solicitations, Roberts stunned observers when he joined the liberal wing of the court to rule that the First Amendment doesn't protect judicial candidates asking for money.

"Judges are not politicians, even when they come to the bench by way of the ballot," he wrote in the 5-4 decision. "And a State’s decision to elect its judiciary does not compel it to treat judicial candidates like campaigners for political office."

He continued, "A State may assure its people that judges will apply the law without fear or favor -- and without having personally asked anyone for money."

Maybe in his second decade on the court, Roberts will get a chance to chip away at Citizens United, if not overrule it once and for all.