While the results of tomorrow's contests are up in the air, one thing is clear: big donors and secret spenders have been drowning out the rest of our voices for months.

U.S. PIRG and Demos' new analysis of pre-election data from the Federal Election Commission (FEC) and other sources shows that outside spending in the first presidential election since Citizens United is living up to its hype: New waves of outside spending have been fueled by dark money and unlimited fundraising from a small number of wealthy donors.

Outside spending organizations reported $ 1.11 billion in spending to the FEC through the final reporting deadline in the 2012 cycle. That's already a 200 percent increase over total 2008 outside spending. 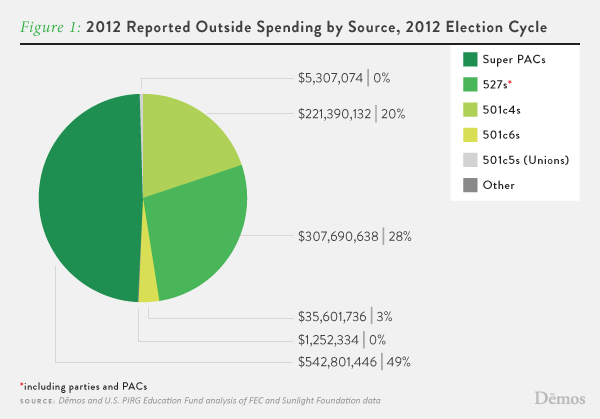 On Election Day, we're all supposed to have an equal say. However, over the course of the election a small group of millionaires and billionaires have had more influence than millions of middle class families.

Almost half of all reported outside spending comes from Super PACs, the independent expenditure-only committees created in the wake of Citizens United, and Super PACs continue to receive the bulk of their funds from a small set of wealthy donors making very large contributions. 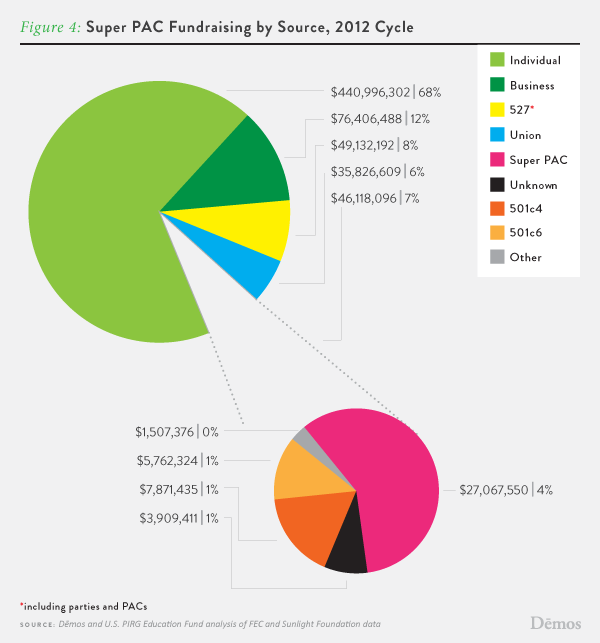 The problem is even starker when you compare this outsized influence to the role of small donors. The two presidential campaigns combined have reported raising $394.4 million from small donors giving less than $200, who are at least 1,972,000 individuals. Just 629 big donors giving at least $100,000 were responsible for $393.4 million in Super PAC donations.

Because of their wealth and the Supreme Court's equation of money with speech, those megadonors are able to amplify their voices to more than 3100 times the volume of an average small donor. 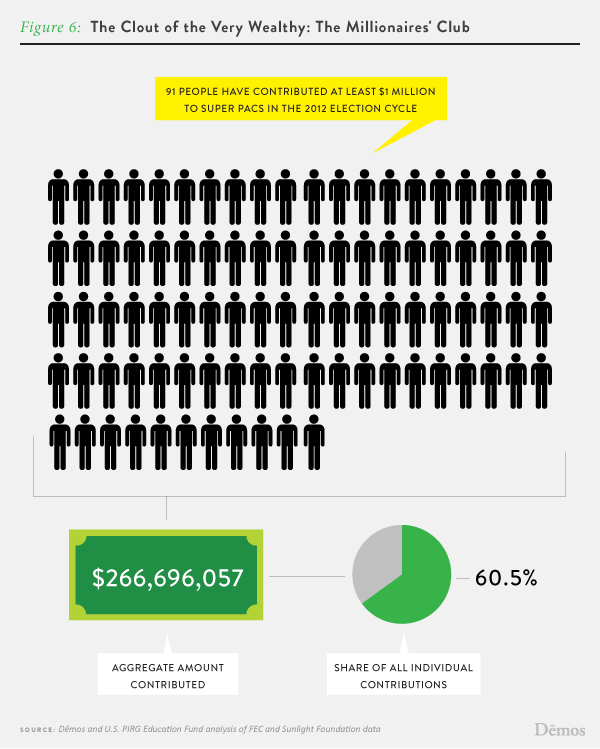 Super PAC's biggest fans, Sheldon and Miriam Adelson, have given $52.2 million to those vehicles in the 2012 cycle, which, though a significant chunk of change to us, is just .21 percent of their net worth. It would take more than 322,000 average American families donating an equivalent share of their wealth ($162) to match the Adelsons' giving alone. 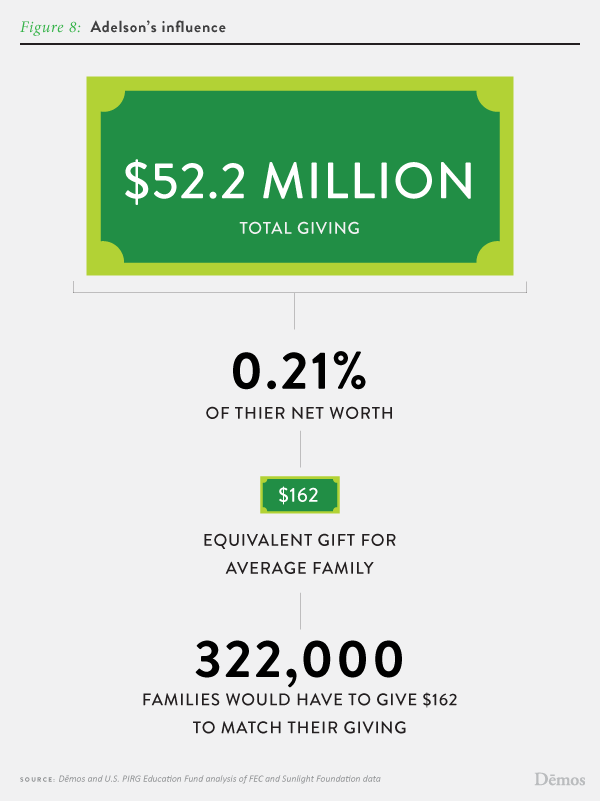 Polling this month found that 84 percent of Americans agree that corporate political spending drowns out the voices of average Americans, and 83 percent believe that corporations and corporate CEOs have too much political power and influence.

Additionally those polls found that 76 percent of Americans support a requirement that companies publicly disclose their contributions to groups like the U.S. Chamber of Commerce that serve as a vehicle for corporations to anonymously spend on elections. Our numbers show we have good reason to be concerned.

While it is likely that much of the business money coming into the elections is funneled through dark money sources such as the U.S. Chamber, which so far has spent at least $35 million in corporate cash on races nationwide, the analysis found that business corporations remain the second largest source of Super PAC money, accounting for 12 percent of all Super PAC funds.

Some of the largest and most active Super PACs receive a significant portion of their funding from businesses: pro-Romney Restore Our Future received over 20 percent of its funds from for-profit corporations.

Of the $1.11 billion in outside spending reported to the FEC, nearly one-quarter, or
$257.9 million, was "dark money" that cannot be traced back to an original source. 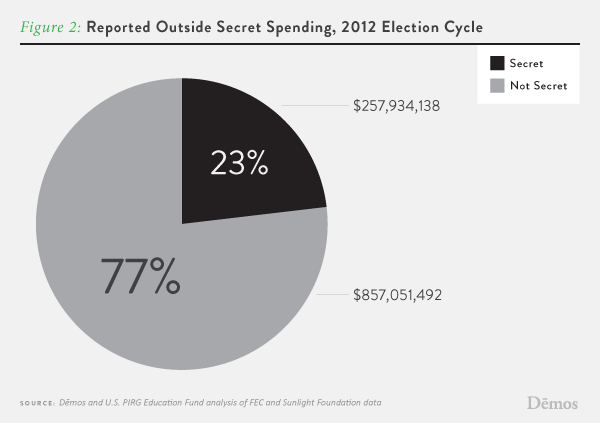 Because of gaps in reporting requirements, spending reported to the FEC is only part of the picture. Groups are not required to report to any public agency certain spending that is intended to influence an election but falls outside of certain time windows before that election. When all types of outside spending on television ads related to the presidential race are taken into account, 32 percent the spending has come from by "dark money" groups that do not disclose their donors. 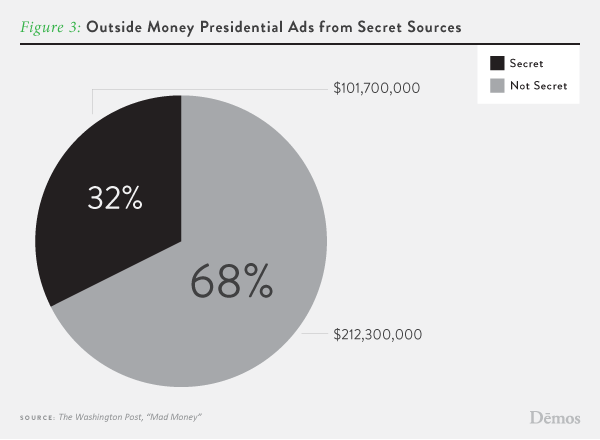 All of this information may feel overwhelming given that we know in the vast majority of elections the candidate with the most financial backing will win. Keep in mind, though, that the money may have been spent -- but our votes have not yet been cast.

Unlimited, corporate, and secret money continues to undermine the principle of 'one person, one vote' at every step of the electoral process, including at the ballot box through unfounded voter suppression. This is why it's more important than ever that Americans use the power of our votes to push back and make our voices heard.

We encourage every eligible American to go to the polls on November 6, to push back on the power of big money. Additionally, we urge you to read up on your candidates' stance on campaign finance reform -- big money can't win when we are educated and engaged.