The race is on to find an effective treatment for citrus greening, a ruinous disease that has decimated citrus industries across the world and brought global orange production to the lowest levels seen in generations.

The U.S. Department of Agriculture has already spent hundreds of millions of dollars looking for a cure -- and the University of Central Florida says associate professor Swadeshmukul Santra may have found one.

Santra's solution is a zinc-based bactericidal spray he calls Zinkicide; it addresses citrus greening by targeting the bacteria that cause the disease. Because those bacteria live deep within the wood of the tree, targeting them requires chemical structures small enough to penetrate the outer layers. Santra developed Zinkicide using nanotechnology to make its particles smaller than a single microscopic cell, and it has already shown great promise in the treatment of citrus canker, another nasty disease. 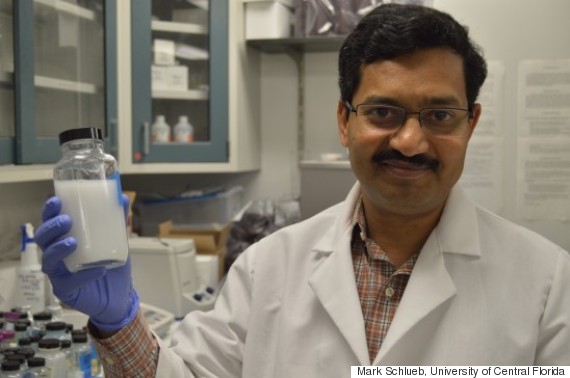 The Orlando Sentinel writes that Santra first synthesized Zinkicide in 2013 and is now testing it on citrus trees in groves across Florida, which is ground zero for the citrus greening epidemic in America. The USDA has earmarked $4.6 million for the testing, which will involve 13 researchers from six different institutions around the country. Though the testing process is set to last five years, Santra told the Sentinel that Zinkicide's efficacy should become clear within two years.

Zinkicide is just one of many potential therapies researchers are exploring for citrus greening, which is also called huanglongbing. One group of scientists at the University of Florida is experimenting with hot steam treatments that cook out the bacteria, while another is trying out another bactericidal chemical, benzbromarone, which has long used to treat gout in humans.

Other teams are focusing on ways to kill Asian citrus psyllids, the insects that spread the bacteria from tree to tree, and developing new varieties of citrus trees that can resist the disease.

Many commercial citrus farmers have already adopted a costly growing regime of supplemental plant nutrients and psyllid-fighting insecticides that seems to suppress the symptoms of citrus greening, as previously reported in a HuffPost feature on citrus greening.

But the so-called Maury Boyd method does nothing to address the bacteria that cause the disease, so most researchers see it, at best, as a temporary Band-Aid -- and at worst, a dangerous alternative to the accepted response of pulling out infected trees to slow down the spread of citrus greening. So even diehard proponents of the Maury Boyd method admit that a solution like Santra's, that actually cures citrus greening, will likely be the key to saving the world's citrus industry in the long term.