Sometimes a food just grabs you and won't let go. You either give in and indulge, or you let that captivating flavor -- which you can practically still taste -- hold you hostage until you finally surrender and make the food yours again. Either way, eventually you will need to learn everything there is to know about your unicorn. You'll figure out a way to make it a part of your life and how to share its glory with others. That's what happened to me with City Bakery's caramelized French toast.

City Bakery is nothing short of an institution in New York. Maury Rubin opened the Union Square bakery, cafe and coffee bar in 1990. While I'm well versed in City Bakery's Pretzel Croissant, its Baker's Muffin and its exquisite hot chocolate, I had never before eaten the French toast. Everything changed after I took my first bite.

I first tried this golden food during a meeting at work and needless to say it became the singular focus of my attention for the duration of said meeting. It's a revelation. First of all, you can eat it with your hands, as I did during this fateful meeting. Yep: we're talking about French toast finger food and no we're not talking about French toast sticks, which are always disappointing. This is more of a wedge, which means there's enough bread to sink your teeth into. The seriously crunchy, caramelized exterior gives way to a wonderfully spongy, custardy interior, making for a dynamic and perfectly complete mouthful. Syrup need not apply. I had to figure out its secret. What makes this French toast so damn amazing? 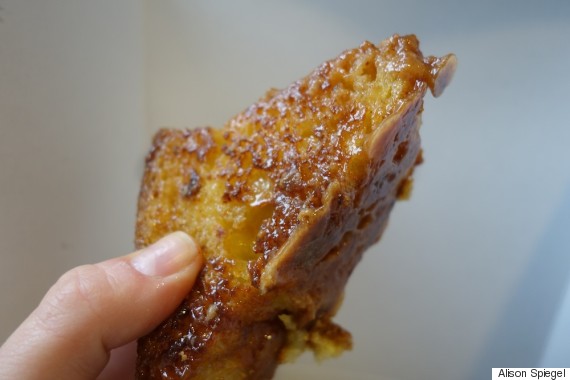 I visited Rubin on a dreary Wednesday morning to find out. Walking into City Bakery when spring still felt so far away was exactly the breath of baked goods-scented air I needed. Rubin showed me into one of the three kitchens City Bakery operates to churn out iconic favorites, seasonal specialities and a couple hundred pieces of caramelized French toast each day. There I watched the chef, the "nicest man in New York making French toast" according to Rubin and now verified by me, prepare two batches of caramelized French toast: one with bourbon and one without.

The key is sugar. A lot of sugar. I assumed that the bread was brûléed to achieve the crunchy crust, but it's really just a ton of sugar, and butter too, of course. This is "a don't be afraid of sugar moment," Rubin told me.

First the bread soaks in a custard for a few seconds -- not the 10 to 20 minutes of soaking time traditionally recommended for French toast. After the bread goes for what is essentially a quick dip, it sits out for four to five minutes. The bread soaks the custard up right away, setting the stage for a pillowy center at the end of the process. Rubin typically uses sourdough bread, which explains how the dish can be decadently sweet but not overpoweringly so. He told me brioche would also work in this recipe. When using sourdough, Rubin doesn't put vanilla in the custard, because it works against the taste of the bread.

Once the bread has soaked, the butter -- a good amount, obviously -- is melted in large pans over low heat, and then in goes the sugar. We're talking about fistfuls of sugar. When the sugar and butter mixture starts bubbling at a slower rate, it's as hot as it needs to be and is ready for the bread. The bread goes in and creates a beautiful, bubbly mess. It gets more sugar smothered on top, and here's where technique is important. Rubin couldn't help but step in at this point to make sure the sugar was evenly spread on top of the bread. Each piece got uniformly covered in crystals. That's where that incredible crust comes from. 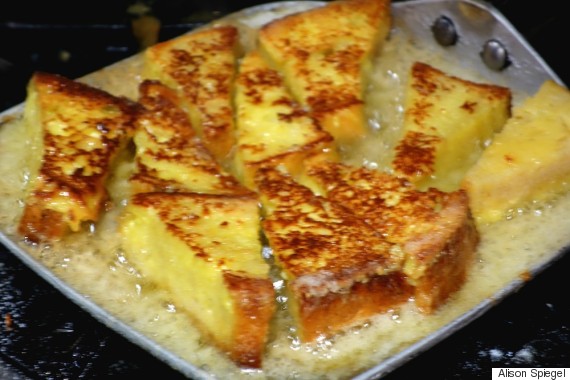 For a boozy version, this is the time to pour in the bourbon. A splash at the end doesn't hurt either. Bourbon or not, when the bread has significantly browned on the bottom, it gets flipped and browns on the other side. Here's where experience helps. The goal is a golden brown color that's not too dark, but certainly not too light. There's no exact amount of time to predict this moment -- just a watchful eye that knows what to look for. Once the bread has been flipped once, it browns on the other side and then on the two uncooked edges, as well. Cooking the bread on all sides seals in the custard for that gorgeous interior, and it helps make the French toast a perfect finger food.

When all sides are sufficiently browned, the heat goes off and the French toast sits for a minute or so. The hot caramel makes the final product extremely sticky, so an oiled surface of some kind is helpful when transferring it out of the pan. As the final product cools and the caramel hardens, the French toast turns from a breakfast food you know well into an extraordinary confection the likes of which you've never seen. 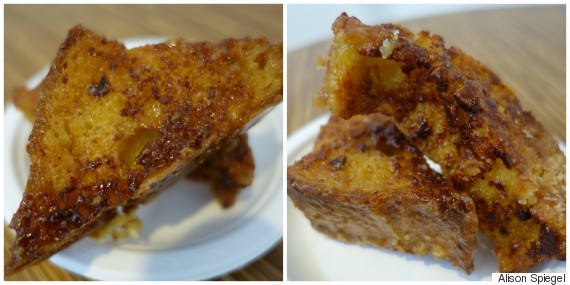 To recap the secrets you'll need to remember to recreate this dish at home: a shorter soak time, sourdough bread and no vanilla in the custard, a lot of butter, a ton of sugar, and cooking the bread on all sides. Think you can handle it? Either you must try it at home or get yourself to City Bakery, because, quite simply, you haven't lived until you've tried City Bakery's caramelized French toast. The end.