In the wake of a series of neighborhood hate crimes targeting Ohio's gay community, the City of Cleveland sent a letter this week to the owner of gay bar Cleveland's Cocktail Lounge, claiming that the bar's repeated calls to law enforcement are over-burdening "the taxpayers of the City of Cleveland" and "our safety forces."

According to The Cleveland Plain Dealer there have been six reported LGBT-related attacks on patrons heading to and from Cleveland's Cocktail Lounge since last spring. The latest incidents involved a group of about 20 people allegedly beating up 28-year-old Jared Fox, resulting in his ear drum rupturing and his face bloodied and bruised, and a group of boys allegedly throwing large rocks at patrons. A 13-year-old was arrested in conjunction with the latter act of violence.

The full letter follows below. An excerpt from the letter reads:

The estimated cost for the city safety forces to respond to your property is approximately $100.00 per call for service. l am confident that we share the same goal and that you will take the necessary steps to eliminate the repeated calls for police services to your property. Therefore, within 10 days of the date of this letter, you will be required to submit your action plan to the First District Neighborhood Police Commander (623-5105), outlining your strategy to eliminate the problems at this location. 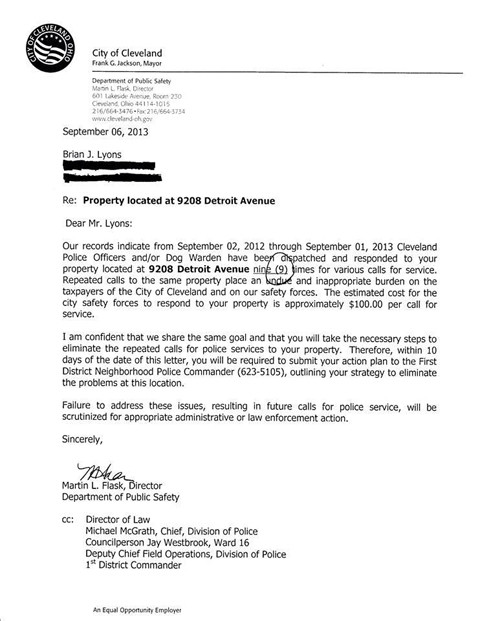 Cleveland's Director of Public Safety Marty Flask has since responded to a social media backlash surrounding the city's response, rescinding the letter and calling the timing "unfortunate." In a statement regarding the public backlash, Flask claimed:

If I had to do it over again, I would have handled this particular situation differently. After reviewing this issue with Mayor (Frank) Jackson, he has directed me to rescind the letter and instead set up a meeting with the District Commander and the property owners so that we can work together to address the issues raised by the calls for service to 9208 Detroit Avenue.

The full statement can be viewed on The City of Cleveland's website.

Ric Scardino, friend of bar owner Brian Lyons and activist of the community, spoke to The Huffington Post about the incidents after being asked by the owner to speak on his behalf.

“All those calls they [city officials] were talking about weren’t for the bar. They were things happening outside of the bar. You want the bar to stop calling? A lot of those calls they’re talking about, those 13 calls, were probably from that night [that Jared Fox got beat up]…It’s not a bar issue, it’s a city issue. Had they had that response a year ago when people started calling, maybe Jared wouldn’t have been attacked. Maybe those people on the patio wouldn’t have been attacked. There are hate crimes by people 12, 13 years old – this is serious…it’s sad…to date the mayor has not spoken to the community.

We want the city safe, we want to make sure that we’re doing our diligence by making sure the city is aware of the problems. Brian [the bar owner] is willing to take money out of his own pocket to clean the area up. He said, ‘I’m willing to spend my own money to trim the trees and improve the lighting in the area.’ He wants to move forward with this on a positive note. He wants everyone to feel safe.

When this happened to Jared, Brian said enough is enough -- he wanted to bring it to the city’s attention…I don’t want to attend a funeral because I turned my back or I walked away. I want them to know that I’m here and I support them.”