When thinking of Egypt one normally would not equate the country as being friendly to those of Jewish faith or heritage. Juliana Maio, author, producer and entertainment lawyer, brings to light a past of rich history when Jews were born and lived in Egypt peacefully. Her amazing fictional novel City of the Sun combines espionage, romance and drama with historical facts in telling the story of a 1941 Cairo that led to the Jewish-Arab conflict. 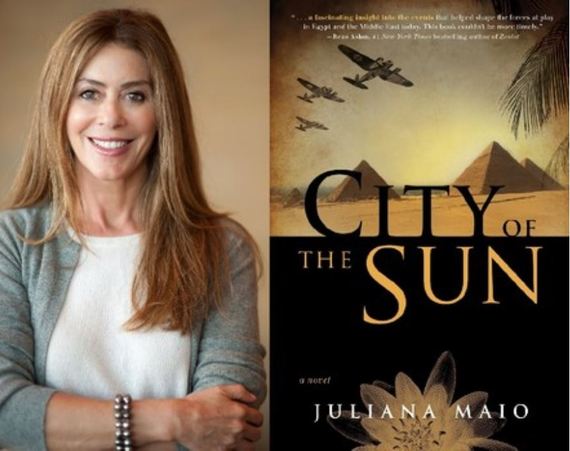 A Jewish-Egyptian herself, Maio was the second generation of her family of European Jewish faith to be born in Egypt. At the young age of only three, in 1956, Maio and her family were forced to leave her home-land and flee to France due to the Suez Crisis. After being raised in France, she traveled to the United States to complete her higher education, receiving her B.A. from the University of California, Berkeley, and her Juris Doctor degree from UC Hastings.

Maio, wishing to share her rich heritage, reconnected with her Egyptian roots after the birth of her daughter. Through much research Maio wrote her novel City of the Sun out of love, as if birthing another child.

Maio's City of the Sun reveals Egypt's role with the Nazis against the British rule. From the lovely Juliana's story one learns much of how the past has played on the continued conflict between Jews and Arabs today. Cairo, once known as the "Paris on the Nile," makes the perfect backdrop for a story filled with espionage and passion. Although most know about the Nazi battles of World War II few realize that Egypt was deeply embroiled in the conflict as well. City of the Sun takes the reader on a ride back to 1941 into a land deeply affected by the state of the world and war.

"Drawing from her Jewish-Egyptian heritage and personal experience as a refugee and immigrant, Maio delivers a powerful story of history, espionage and love with City of the Sun. The novel follows Mickey Connolly, an American journalist who is in Cairo to report on the war in North Africa in 1941. Mixing true historical events with a fictional story of love and espionage, Maio creates a poignant tale, while painting an accurate painting of a pivotal moment in history."

The advantaged Europeans and continued British military occupation along with the intensifying Arab-Zionist conflict eventually drove Jews, who were seen as traitors aligned with Western powers, out of Egypt. The Arab-Israeli war of 1948 and the creation of the State of Israel as a homeland for the Jewish people further deteriorated relations. With the Suez Canal Crisis in 1956, involving France, Britain and Israel, followed by wars in 1967 and 1973 between Egypt and Israel, associations between Jews and Muslims in Egypt were completely damaged.

I was fortunate to have a chance to speak with the author about history, her real-life story and views. 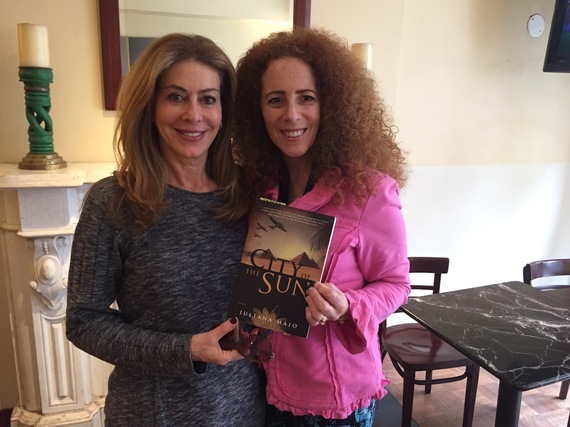 Carol Ruth Weber: The ten years of research it took of learning so you could write your amazing story must have been an emotional roller coaster. What did you learn about yourself and did this journey change your life's outlook or direction in life in any way?

Juliana Maio: Yes, yes, yes! Refugees tend to distant themselves from where they came from. Leaving my birth place at such an early age I quickly assimilated myself within the French culture. I was sent to boarding school where I immediately became French and learned to reject my Egyptian background.

I was in search of my identity. I never expected to be so fascinated. The journey led to me finally accepting myself as culturally Arabic. So much material from everyone's point of view propelled the history that I then had to fictionalize into the story, balancing the two together just right. I am proud of my immigrant status and being grounded by my child, job and husband. It took a very long time, needing to understand with so much passion, who I was, who were my parents.

CRW: The story speaks to the crucial historical moment in time when Jews and Arabs lived peacefully together prior to the expulsion of the Jewish people from the Arab land. Do you have any memories of being three years old and leaving your homeland?

JM: Being so young when we were forced to flee, I have no actual remembrance of when I actually lived in Egypt. In my mid-twenties working as a lawyer I went to Egypt for a client. Getting off the plane I breathed in the air and it felt familiar. The food, music and history is in my core DNA. When I am in Egypt I feel immediately accepted, like they can tell I am one of their own.

JM: The country is made up of a very young population. With such a large percentage of people being under 25 years old most there now have no idea that Jews ever lived there, making them the "Forgotten Jews." The Jews who are still there are made up of one man and some elderly women who had refused to leave. The Jews, who would not leave and stood ground because it was their country, faced hardship and jail. Out of dire circumstances 99-percent of Jews left the country. Putting aside bad times in order to have good memories has helped.

Today I am saddened to see the hatred between Jews and Muslims. Politics have hijacked the hearts and minds. This is a 100 year old conflict. At the end of World War I the French and English mapped out boundaries in the Arab world creating countries that should never have been grouped together and creating dictatorships. The Arabs did not have a chance to form their own countries. Israel was formed out of a need for Jews to have their own country making it an "Island of Democracy in a Sea of Madness."

JM: The French and English came to the country as if they owned it, especially during war soldiers pouring in imposing their lifestyles of drinking and prostitution onto the Arabs. It was a matter of politics. The English and French divided the Middle East. Britain had Egypt with the main interest being the Suez Canal.

Due to trade in India the English could not afford to lose the Suez. They imposed themselves politically and economically, disregarding Arabs as primitive and barbaric. The Arabs in turn developed an aversion to the British which transferred to the entire West. As a direct result to what the British did back then to the Arabs gave rise to new Islamic Extremists beginning with the Muslim Brotherhood. Egypt, being promised independence from England by Hitler and German propaganda, sided with Germany.

CRW: Jewish people had long been wanderers looking for a homeland before Israel was born, how did they come to live in Egypt in the first place?

JM: Before the wars in Egypt since Biblical times, before the Suez Canal and modernization, people from Middle East, Africa and Italy brought their own religions and languages to live there due to economic reasons. Most lived together speaking French, then the International Language of Diplomacy until the first half of the twentieth century. Cairo was absolutely beautiful back then. The Europeans made it their playground, a magnificent city, a beautiful blend of the East and West. I wanted to capture that moment for City of the Sun so the world would not forget.

CRW: Not well taught in the United States one learns from your book that the Battle of El Alamein was a pivotal victorious moment for British allies, fighting in North Africa against the German and Italian army. What did you learn about this moment having on the ultimate outcome of the war and what effect did it have on the Jewish people?

JM: If Germany had conquered Egypt it would not of been good news for the Jews. During World War II whoever won control of the Suez Canal would win the war. The British declared Martial Law and took over, taking away the Arabs weapons and control. British and the allied Navy were in Cairo, the entire Mediterranean was important. Without the battle, we could of lost the war.

With such a compelling story Juliana is looking to one day seeing her City of the Sun in film, perhaps as an important mini-series. A thoughtful woman spreading her historical knowledge in amazing non-fictional exciting prose worthy of reading by all. Knowledge and appreciation of others can truly end war - may all on this Earth find peace living together.