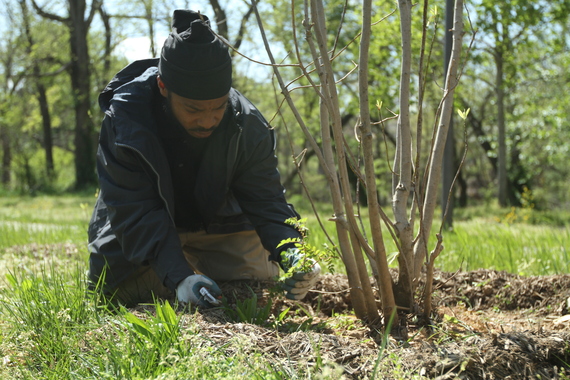 With estimates citing that over a third of Americans have experienced some kind of encounter with the criminal justice system, the need for serious criminal justice reform in this country is long overdue. The Department of Justice took an admirable step by marking the week of April 25-29 as the first-ever 'National Reentry Week.' Next week, DOJ will host events in prisons and communities focused on issues facing returning citizens.

A new take on criminal -- and environmental -- justice 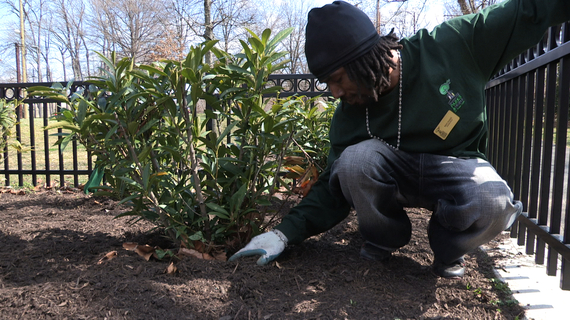 CITY OF TREES introduces audiences to a compelling group of people left out of the workforce. We also meet the people behind a non-profit organization - Washington Parks & People - fighting to give these individuals a second chance. In the midst of the recession, CITY OF TREES zooms-in on the stories of Michael Samuels, Charles Holcomb and James Magruder, all trainees in a stimulus-funded green job training program. The DC Green Corps, a program of Washington Parks & People, trains people how to plant trees and take care of parks in high-unemployment communities in Washington, DC.

CITY OF TREES focuses on the tension-filled final six months of the stimulus grant that created the Green Corps. The program participants must plant scores of trees in Southeast DC's Oxon Run Park (a primarily African American community where unemployment reached 25.2 percent during the recession) before the money runs out.

Each year more than 600,000 people return to our communities after serving time in federal and state prisons. Another 11.4 million cycle through local jails. Rather than focus on these big abstract numbers, CITY OF TREES follows the intimate stories of DC Green Corps participants: men who are caught in the vicious cycle of incarceration of recidivism.

In the film, we learn that Michael, one of the Green Corps trainees, previously held a steady job. When his mother fell ill with cancer, Michael began dealing drugs to supplement his income and help cover mounting medical expenses. Michael is apprehended and spends nearly two years in a federal penitentiary. The Green Corps job training program becomes the only place that will hire Michael, thanks to director Steve Coleman's commitment to hire the most difficult-to-employ people (more than 70 percent of Green Corps trainees have a record). While Michael gets a crash course in urban forestry during the three-month training, he also builds soft skills through practicing interviews, attending job fairs, preparing a resume, and creating relationships with mentors.

The film forces us to confront the realities of Michael's struggle to re-integrate into the community. Michael is a charming man and a hard worker who wants to turn things around. In the film, we watch how he grapples with job applications that ask about his criminal history. We see Michael look a prospective employer in the eye and feel the anxiety as he speaks about his release from prison. We experience the uncertainty as Michael's neighbors try to pull him back into his 'old ways.'

These scenes are difficult to watch, but they create empathy and help us walk in Michael's shoes. For years, criminal justice reform advocates have known that local and state-based Service and Conservation Corps - like DC Green Corps - have been one of the few options for paid job training for returning citizens like Michael. But the steps of the reentry process are still vague to most Americans. CITY OF TREES helps ground these roadblocks to reentry in the experience of a real, relatable person.

Films make it easier to start tough conversations. CITY OF TREES captures the reality of living in a disenfranchised urban community; the day-to-day experience of participating in a job training program as a returning citizen; and the story of minority participation in the emerging green economy. CITY OF TREES can play an important role in these conversations, connecting the dots between reentry, environmental justice, poverty and access to good jobs.

It took decades of institutionalized inequality to create the generational poverty and cycles of incarceration seen in so many of our communities. We can't fix these issues overnight, but we need to start somewhere. Fortunately, it seems like one of the few things our divided leaders can agree upon is that we need to support efforts to make sure everyone - including those who have made mistakes or face barriers - have a path to success. Just recently, House Speaker Paul Ryan gave a speech in which he discussed the need for criminal justice reform to correct policies that destroy lives and prevent former convicts from reaching their potential.

The DOJ hopes that prisons and community organizations will host events throughout the week of April 25 to raise awareness about reentry work. Authentic, people-centered storytelling like CITY OF TREES can help us understand what's really going on in people's lives with infinitely more impact than charts, graphs and stats. Please participate in this conversation. Tune-in to CITY OF TREES today, Tuesday, 4/19, or consider hosting a watch party for Earth Day (4/22) or as part of National Reentry week through the free PBS streaming version of the film.