This isn't just wordplay. For long-time Victoria resident Mike Downey, it has very real consequences: he lives with two potbellied pigs, Athena and Vishnu, whom he considers part of the family. But the city has ordered them to find a new municipality to call home, citing the bylaw that prohibits food animals in city limits. 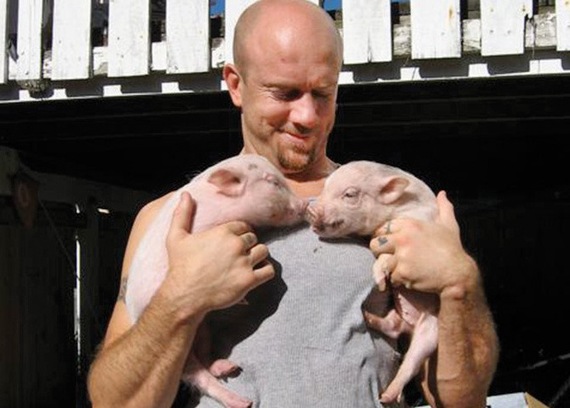 Whether an animal is normally raised for food is actually a cultural complex question. In some cultures, eating pigs is not considered acceptable; in others, eating dogs is normal. And although we tend to think of animals as either falling into the food category or not, this is not always the case. In the City of Victoria, for example, rabbits might be considered food depending on whether you're at the supermarket or the animal shelter.

Given the cultural ambiguity surrounding how and when we designate animals to be either edible or lovable, city officials ought to look at the purpose for which the animal is being kept in the city. This is the only logical and culturally sensitive way to interpret the bylaw against keeping animals "normally raised for food." It also forms the basis of a legal advocacy letter submitted to city officials from national non-profit Animal Justice.

Pigs would make great neighbours. Contrary to their undeserved reputation, pigs are actually fastidious. They are so committed to cleanliness, in fact, that they will separate their living quarters into areas for sleeping, eating, and excreting if given the chance.

City officials have expressed concern that urban yards are not large enough for farm animals. Paradoxically, however, life in the city offers more space to pigs than life on a rural, commercial farm. That's because most pigs raised for food spend their entire lives in cramped cages or pens in windowless warehouses. Their first taste of sunlight and fresh air will be en route to slaughter.

Athena and Vishnu are quite possibly more upstanding members of the community than some human citizens. In 2012, they drew crowds of children to pose, along with Santa, for their annual holiday pictures. The stunt raised $1000 to help terminally ill children through the Lynda Adams Project Society.

Athena and Vishnu are also beloved members of their neighbourhood, which includes two daycares and a group home for people with special needs. Children and adults alike delight in the friendly pigs, feeding them grass, offering them head scratches, or simply watching them over the fence.

Recently, it was revealed that the Lieutenant-Governor of B.C., the Honourable Judith Guichon, has been bringing none other than her pet lamb to work at the government building in Victoria. Although sheep are normally raised for food, nobody is trying to evict Her Honour's adorable companion, who is led on a leash for daily strolls through the grounds of Government House.

And years ago, another Victoria resident found herself facing scrutiny under the same bylaw because of her own potbellied pig--Zig--who was ultimately allowed to stay. In that case, city official Mark Johnston said they had "better things to do" than crack down on the offence of privately providing a loving home to animals.

Makes sense to me. Let's hope the city follows suit in this case.