Indigenous wildlife in the nation's capital goes well beyond Democrats and Republicans.

In fact the District has "hundreds of species," says Anne Lewis, president of City Wildlife, the first rehabilitation center dedicated to Washington's fauna. "Most people don't realize the sheer diversity of wildlife."

D.C. has coyotes, foxes, raptors (which are birds of prey) and even an endangered, eyeless, colorless shrimp-like crustacean with an 8-year lifespan that isn't known to live anywhere else on earth.

The center, which opened in July, can care for about 1,200 animals per year. So far it's taken in about 140 animals, which includes an osprey (a type of hawk) that was hit by a truck, a turtle found in an abandoned apartment, a lot of pigeons and songbirds (one bird mother has even taken to feeding a couple of orphaned babies from a different species), several opossum and a baby hummingbird that was brought in after being attacked by a cat (it's smaller than a penny and has to be fed by hand multiple times an hour).

Wildlife biologist Abby Hehmeyer and clinic director Alicia DeMay are sitting at a round table, holding syringes of formula to the mouths of infants who belong to a much less exotic-seeming animal species that is filling about half of the center's cages.

It's a "dream job," says DeMay, getting to "sit around and feed baby squirrels."

Lewis -- who is unpaid, and runs City Wildlife with three staff members, veterinarian Erica Eads as well as Hehmeyer and DeMay -- tells The Huffington Post that caring for hurt or orphaned pigeons and squirrels until they can be released back into nature may seem small potatoes to some.

But "90 percent of what we're doing is to nurture a humane response in people," says Lewis. The center is currently funded privately, though funding from the District government is also expected. City Wildlife makes the case that, until the in-District facility opened, D.C. Animal Control was driving 9,000 miles per year to reach wildlife rehabilitation centers in Maryland and Virginia. They will take in almost any injured creature found in the District, except for deer and "rabies vector species" like raccoons, skunks, bats, foxes or coyotes. "People are so relieved to have somewhere to bring animals."

One of those animals is a white dove, found starving in Georgetown not long after the center opened in July. It's thought that the dove was part of a graduation ceremony or wedding. He can't be released even though he's now a healthy weight.

"They don't make it in the wild. Now we're stuck with him," says Lewis.

The dove is, for now, in a big cage at the front of the cheerful, light-and-animal-filled building. If it turns out that no one wants the cooing bird as a pet, he'll be named, and kept around to further the mission of helping D.C.'s animals through rehabilitation, advocacy and education.

Everyone's hoping for happy endings, back in the wild, for the others in City Wildlife's care. They're trying to track down the people who used to live in the apartment where the turtle was found, since they need to release the turtle in the place where she was first picked up. They're readying the older squirrels for transfer to a facility in Virginia, to be eased back into their undomesticated existence. And, every 15 minutes, someone is tending to the most delicate animal, the impossibly small baby hummingbird.

"I've been doing this 17 years and only had two survive," says DeMay. "He's going to be the third." 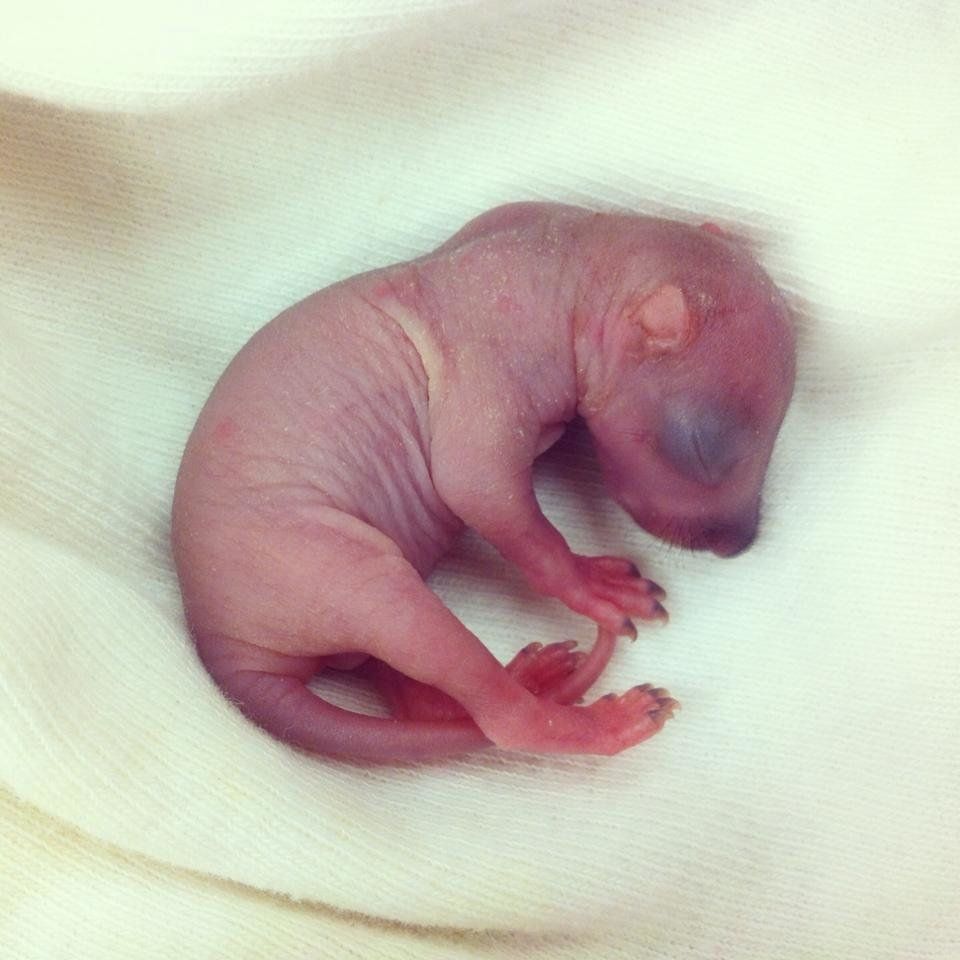 1 / 10
A week-old baby squirrel found on a D.C. sidewalk
courtesy of City Wildlife