I was recently invited to attend a briefing on values and leadership at the White House in Washington, D.C. It was graciously convened by President Obama's Office of Public Engagement and the D.C. Global Shapers.

A community of the World Economic Forum, the Global Shapers is an international network of over 200 city-based hubs developed and led by 1,500 promising leaders between the ages of 20 and 30 who use their entrepreneurialism to serve society.

Along with my fellow Canadian Shaper, Brian Kingston, and several dozen Global Shapers from around the world, we were honoured to take part in a series of "TED Talks" and workshops hosted and moderated by senior officials from the Office of the President.

During the course of our day, we grouped together by interest on issues such as health care, gun violence, employment, climate change, preventative disease, and education. In a breakout session focused on civic engagement with Shapers from Boston, Mass. and Charlotte, NC, we were challenged to identify a problem faced by the Milliennial Generation -- those between 15 and 30 years of age -- with respect to civic engagement. We were then asked to envision a tangible solution to that problem. 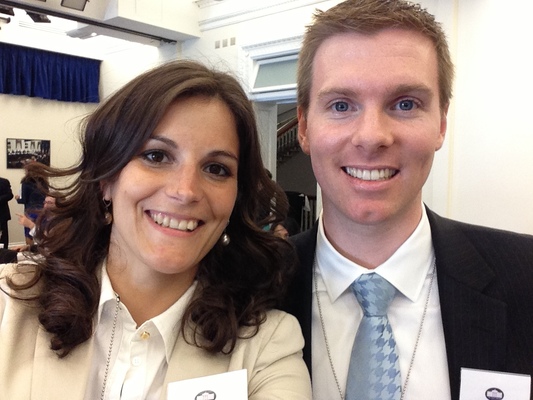 Myself and Brian Kingston, Global Shapers from Canada (Ottawa Hub).

What's more, according to the CIA World Factbook, there are more than 1.7 billion Millennials on earth today, who, based on recent studies, are actually the most likely group in the 21st century to take action for each other, a cause or a government.

Within this new paradigm, Millennials from around the world have been shaping, sharing, organizing and accomplishing major initiatives -- from Canada's TakingITGlobal, which encourages over 350,000 youth around the world to take action that affects their local and global communities to local community initiatives like The Grassroots Project, which serves to educate at-risk youth from Washington D.C. about HIV/AIDS awareness and prevention by utilizing Division I "student-athlete" role models.

Our group decided to explore how it could be possible to better harness the good intentions of Millennials using mobile technology, and how, by extension, those intentions could be funneled into civic engagement.

While much is being done by Millennials to improve the state of the world, our discussions at the White House identified a gap in the current marketplace for tools to incentivize civic action.

We observed that while there are several platforms and apps now available to bridge Millennials' intentions with civic engagement, there are few, if any, that communicate and cross-network with each another.

Together, we concluded that a simple, mobile platform dedicated to civic engagement, is needed. Such a platform would serve to allow young people to take action on a particular cause and then be connected to other people doing the same kinds of things. Imagine a Pinterest - or even an IfWeRanTheWorld app - dedicated solely to civic action.

Through this kind of interest-based mobile platform, projects and initiatives could be structured, calculated and tracked over time. Causes and political campaigns of epic proportions could be broken down to the unit level and built up again based on priorities by groups of people around the world - much like how Benjamin Franklin and F.W. Taylor sought to improve themselves and society by breaking down big projects into microtasks.

Franklin and Taylor tracked and analyzed these microtasks for scalability over time. I invite you to see my recent post: "Microtasks: An Unlikely Legacy of Benjamin Franklin," for more on this.

By extension, this could help develop blue prints for tackling issues of civic engagement and could prove more effective than trying to work through political parties and other scattered campaigns vying to accomplish the same things.

Reduced to its logical conclusion, what we're talking about is a world where we can break down geographic barriers, classes, and glass ceilings. Where voters can actually find their preferred political candidates based on their shared interest in a like cause.

At the end our day at the White House, we had resolved that the world needs a mobile platform where non-government organizations, not-for-profits, special interest groups and political parties alike can merge their interests around one central cause, and where people can really start to make a difference - together, and as one driving force.