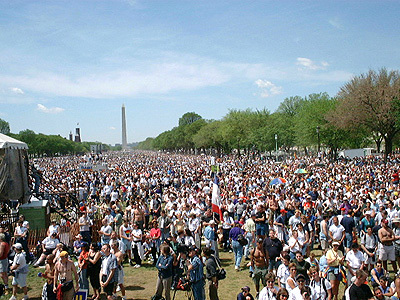 What the Religious Freedom Restoration Act (RFRA) controversies have underscored is the need to add sexual orientation and gender identity to the Civil Rights Act of 1964.

The Civil Rights Act established classes that are protected from discrimination: race, color, religion, sex and national origin. For the last two decades, the LGBT community has tried to pursue the strategy that was successful for the disability community when the Americans with Disabilities Act (ADA) passed -- get legislation passed that specifically addresses LGBT discrimination.

The ADA was pursued because there were specific needs for the disabled community with respect to accommodations in public places. These additional needs made it impractical for the ADA to pursue adding the disabled to the Civil Rights Act. Not so for the addition of sexual orientation and gender identity as protected classes. Not one additional word of the Civil Rights Act would need to be changed.

We can expect some on the right to scream "no more special rights in America." Are they suggesting that religion should not be protected against discrimination? African-Americans? Women? Arabs? I hope not. So why is sexual orientation and gender identity different? Discrimination against the LGBT community is undisputed which was highlighted during the Indiana RFRA debacle. Congress needs to rectify this injustice.

Congressman Boehner take the lead and show that the Republican Party does not believe in discrimination against LGBT people. Take the sting out of the issue before the 2016 presidential contest engages. The Indiana RFRA controversy has already hurt some of your presidential hopefuls, like Jeb Bush, Marco Rubio, Bobby Jindal and Scott Walker. Do you really want this discrimination issue to sink your party before the battle is even engaged? America has made it clear what they think of discriminatory laws -- are you listening?

Congresswoman Nancy Pelosi the LGBT community appreciates what President Obama and the Democratic Party have done for our rights in the last six years. It is truly legendary. How about a final crowning achievement with the addition of sexual orientation and gender identity as protected classes to the Civil Rights Act? It could be the cherry on top of the wedding cake.

America has other important issues to address, let's put this one to bed with the stroke of a pen. Please get it done for LGBT Pride Month in June. I'll plan the celebration.