"We are calling for a boycott of Sunday's Academy Awards ceremony," National Action Network political director Najee Ali said at a news conference. "We believe the Oscars needs more diversity within its membership."

The location of the Los Angeles demonstration has yet to be determined with police, Ali said.

The Academy of Motion Picture Arts and Sciences, which hands out the Oscars, does not disclose the demographic breakdown of its roughly 6,100 members, but has long been criticized for being predominately white and male.

A 2012 investigation by the Los Angeles Times found Academy members were 94 percent white and 77 percent male. Members, who are selected for their work and recommended by existing members, had a median age of 62, the study said.

This year's nominations had no ethnic minority actors among the 20 nominees in all four acting categories, which spawned the trending Twitter hashtag "#OscarsSoWhite."

"It is very important that the Academy Awards and its leadership have a membership and a type of voting system that represents America," Ali said.

A Reuters/Ipsos poll published on Wednesday found that 34 percent of the nearly 2,000 respondents said they believed Hollywood had a general problem with minorities.

Sixty-two percent of black respondents said the film industry had a problem with minorities, compared with 48 percent from all minority groups polled. (Reporting by Saif Tawfeeq; Writing by Eric Kelsey; Editing by Mary Milliken and Ken Wills) 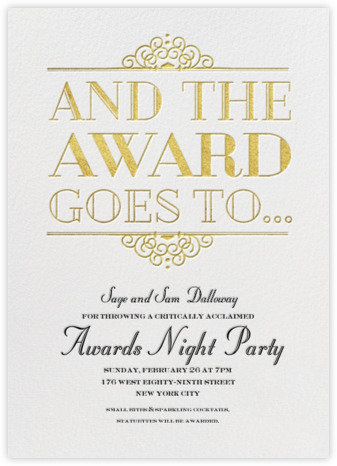 1 / 21
Invitations
It's not to late to send out invites for your viewing party — especially with <a href="https://www.paperlesspost.com/cards?q=oscars&card=9174" target="_blank">stunning online options like this from Paperless Post</a>.
Paperless Post