Likely not a word ever preferred in an educational setting, but the description the Southern Poverty Law Center found appropriate to assess the state of education about the civil rights movement in the U.S.

Findings from a study -- "Teaching the Movement: The State of Civil Rights Education 2011" -- released this week by the SPLC's Teaching Tolerance program show that nearly three-quarters of states fail at teaching the civil rights movement. An indicator: just 2 percent of high school seniors in 2010 could fully answer a basic question about the Supreme Court's landmark decision in the historic Brown v. Board of Education case.

“To separate them from others of similar age and qualifications solely because of their race generates a feeling of inferiority … that may affect their hearts and minds in a way unlikely ever to be undone. … We conclude that in the field of public education separate but equal has no place. Separate educational facilities are inherently unequal.”
—1954

Based on the quotation [above] and your knowledge of history, describe the conditions that this 1954 decision was designed to correct. Be as specific as possible in your answer.
—Question on the 2010 National Assessment of Educational Progress U.S. History Exam

Just 2 percent of the 12,000 12th graders who took the NAEP exam could correctly identify the two points the question was seeking to earn a full score of "complete" -- that the case and decision were sparked by segregation, and that the segregation was an issue in schools. They were not required to identify the case as Brown v. Board of Education.

Contrast that with the 73 percent of test-takers who either didn't answer the question at all or left an "inappropriate" response by restating the question or giving irrelevant information.

The study assessed states' curriculum by scoring them based on the comprehensiveness of standards for teaching the civil rights movement. Across the country 16 states do not require any instruction on the movement and 19 cover the topic minimally.

Overall, researchers determined that states "mistakenly see it as a regional matter, or a topic of interest mainly for black students," according to the report. Of the 12 highest scoring states for civil rights education, 9 are from the former Confederacy. The further from the South and the smaller the black population in a state also meant less focus on curriculum including the civil rights movement. 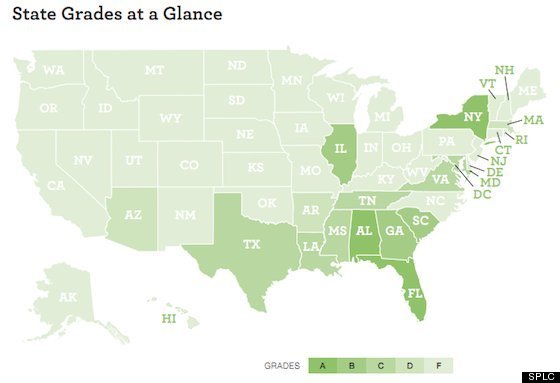 The study's findings also reveal that states that do include lessons on the movement tended to avoid conflict and teach what the report calls "sanitized versions" of the movement by focusing more on who the leaders were and what events took place, and less on obstacles many faced through the movement, like racism and white resistance.

“For too many students, their civil rights education boils down to two people and four words: Rosa Parks, Dr. King and ‘I have a dream,’” SPLC Teaching Tolerance Director Maureen Costello, said in a statement. “When 43 states adopted Common Core Standards in English and math, they affirmed that rigorous standards were necessary for achievement. By having weak or non-existent standards for history, particularly for the civil rights movement, they are saying loud and clear that it isn’t something students need to learn.”

The findings from SPLC's study reveal a deep issue in a broad report issued by the National Assessment of Educational Progress in June. The NAEP report studied students in the 4th, 8th and 12th grades across the U.S. and revealed low performance on history assessments across the country as test scores stagnated. Just 32 percent of 8th graders could identify one advantage American troops had over the British during the American Revolution, and only 9 percent of 4th graders could identify a photo of Abraham Lincoln and state two reasons for his importance.

But history isn't the only area where students are falling behind. A 2009 study showed that U.S. students ranked 25th among 34 countries in science and math -- behind foreign counterparts in China, Singapore, South Korea, Hong Kong and Finland.