As the World Bank Group (and the IMF) shareholders convened the other week in Washington, DC for their annual meetings, one lesser-known issue grabbed the spotlight -- the new environmental and social policies. The pressure was high, as over 300 Civil Society Organizations (CSO) and members of impacted communities, issued a statement rejecting the new proposed safeguards at the outset of the meetings. By the end of the week, things got uglier for the Bank. CSOs and community members walked out of the Bank's official Safeguards consultation to join protesters outside. 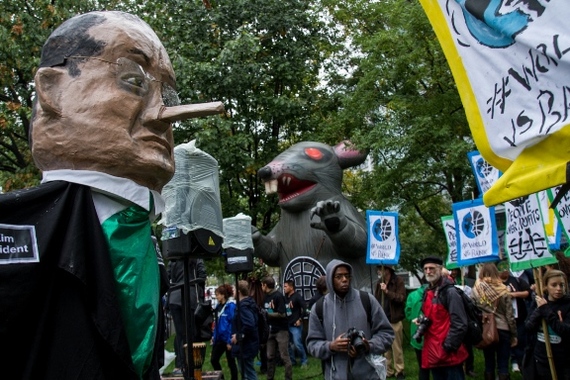 The World Bank Safeguard policies were established 20 years ago in response to decades of civil society protests against harmful projects, including mega-dams in India's Narmada Valley. After over two years of anticipation, and an overwhelming civil society effort to convey priorities for strengthening the Safeguards, the Bank published a woefully inadequate, first draft of revised policies on July 30th for a first round of global consultations. Several CSOs, spanning across Asia to Latin America to Africa to Europe, forcefully rejected this draft on the basis that it "falls far short of the rules needed to protect the environment and respect the rights of affected communities, workers and indigenous peoples." Furthermore, the civil society collective statement reads that "the draft derogates from well-established international covenants/standards and would effectively dismantle 30 years of policy evolution, setting a dangerous precedent among national, regional and global actors." The draft is seen as "a massive dilution of current Bank policy that could undermine the momentum for the upward harmonization of social and environmental standards and their alignment with universal human rights." 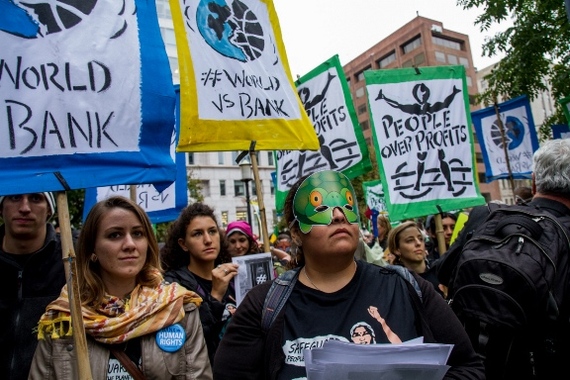 The CSO groups called on the Bank to abandon its current process of small and targeted consultations, which largely exclude the impacted communities, and instead engage in a process that is based on the understanding that human rights and sustainability are the fundamental components of development, which are essential to achieving the Bank's goals of eliminating extreme poverty and increase shared prosperity.

Despite the statement, the World Bank Group went ahead and invited CSO representatives to attend one of the first consultations on the new draft policies. Along with many critical inputs pointing to the omissions and commissions in the new draft, the consultation also heard a clear rebuttal of the Bank's shadowy promotion of corporate profit interests over rights of communities, brought eloquently by Medha Patkar, the leader of the iconic Narmada dam struggle from India. 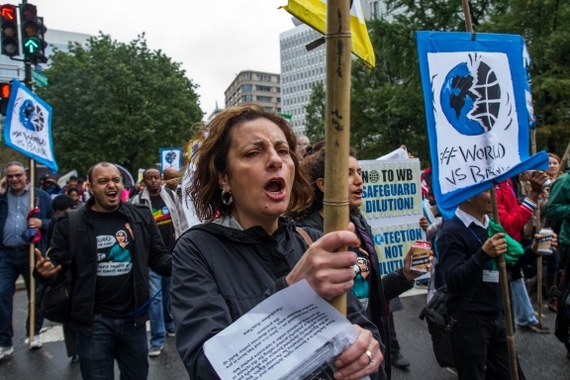 After Bank's presentation on the new draft, Soumya Dutta, Convener of the Beyond Copenhagen Collective in India, read a CSO statement outlining many mal-designs in the draft policies and informing the Bank of the decision of CSOs to reject the new draft upfront: "The protections you now seek to dismantle -- the safeguards that we fought for over decades -- do not belong to you. They are not yours to throw away. They belong to the world and its vulnerable people." Most of the groups attending the meeting then walked out of the consultation to protest the new draft. The consultation room was left almost empty, with mostly Bank staff remaining. 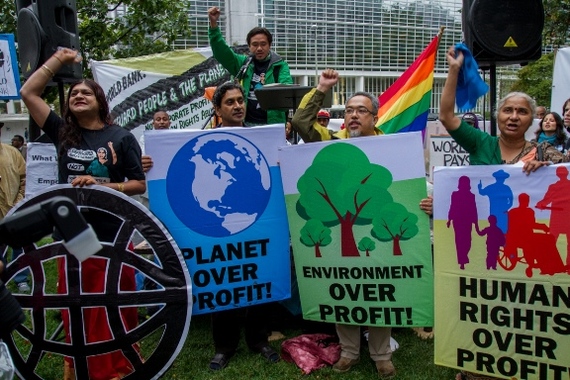 After this, CSO representatives took to the streets. Speakers from the global south spoke in front of Bank's main building raising issues that ranged from the protection of environment and climate action to the protection of basic human rights, rights of indigenous peoples, labor and SOGIE (Sexual Orientation and Gender Identity & Expression). The protest was part of a global string of actions, including one in Brussels in September.

Medha Patkar effectively captured the civil society frustration with the Bank moving backwards, as well as the spirit of this wave of protests, by hearkening back to her victory in India that spawned the Safeguard Policies: "We thought the World Bank learned from Narmada... We will fight, and we will win!"