Colorado's civil unions bill which grants same-sex couples similar rights to married couples passed in the Colorado House on Tuesday morning and now heads to Gov. John Hickenlooper who is expected to sign the bill into law.

All 37 House Democrats and two of 28 House Republicans voted in favor of Senate Bill 11, which has already cleared the House. Read the full text of SB-011 here.

Colorado's first openly gay House speaker Mark Farrandino (D-Denver) and one of the co-sponsor's of the bill tweeted this morning on the bill's passage:

Civil unions passes on a vote of 39-26 and is not headed to the Governor. #coleg #lgbt http://t.co/SZ1PUdTGzl

Openly gay Sen. Pat Steadman (D-Denver) who has sponsored similar civil unions bills in the past offered a short and heartfelt Twitter poem as the bill passed in the House:

I've written a small poem for Twitter, just for this occasion, 12 March 2013. It's titled "Eleven" and it's for Dave. #CivilUnions #coleg

11 is a prime number. Eleven is a lovely word. It's binary; a pair of ones. It's two like things, bound together, to make a whole of ones.

Republicans protested the bill because it does not offer religious exemptions which they say will cause the issue to wind up in court, The Denver Post reports.

"What this bill is about is personal freedom and individual liberties," said Cheri Gerou, R-Evergreen, one of two Republicans supporting Senate Bill 11. "This is a good conservative bill."

The House debated civil unions for the first time in its history Monday. A similar civil unions bill was the most contentious issue at the end of last year's legislative session when it was killed in committee.

Then-Speaker Frank McNulty, R-Highlands Ranch, ran out the clock and killed the bill along with 30 others during a special session.

This year Ferrandino, Colorado's first openly-gay Speaker of the House, pointed out that Colorado has eight gay legislators -- the most per capita and almost the first state with gay legislative leaders in both chambers.

"This bill is about three simple things," Ferrandino said. "It's about love, it's about family, and it's about equality under the law."

Republican Rep. Lori Saine, Dacono, however argued that religious beliefs play a central role in her opposition of the bill while additional GOP members kept likening the bill to same-sex marriage.

"What this bill is about, really is the Bible. Is it right or wrong?" Saine asked.

But in his opening speech, Ferrandino reminded the Legislature that civil unions are not marriage, though same-sex marriage is something he personally supports.

In 2006, voters passed Amendment 43, a constitutional amendment defining marriage as between a man and a woman.

"Until the voters say otherwise, civil unions is the closest we can do as a General Assembly to make sure that all families are provided protections under the law," Ferrandino said.

If Hickenlooper signs the bill into law, which he is expected to do, Colorado will become the 18th state to pass civil unions or gay marriage legislation. 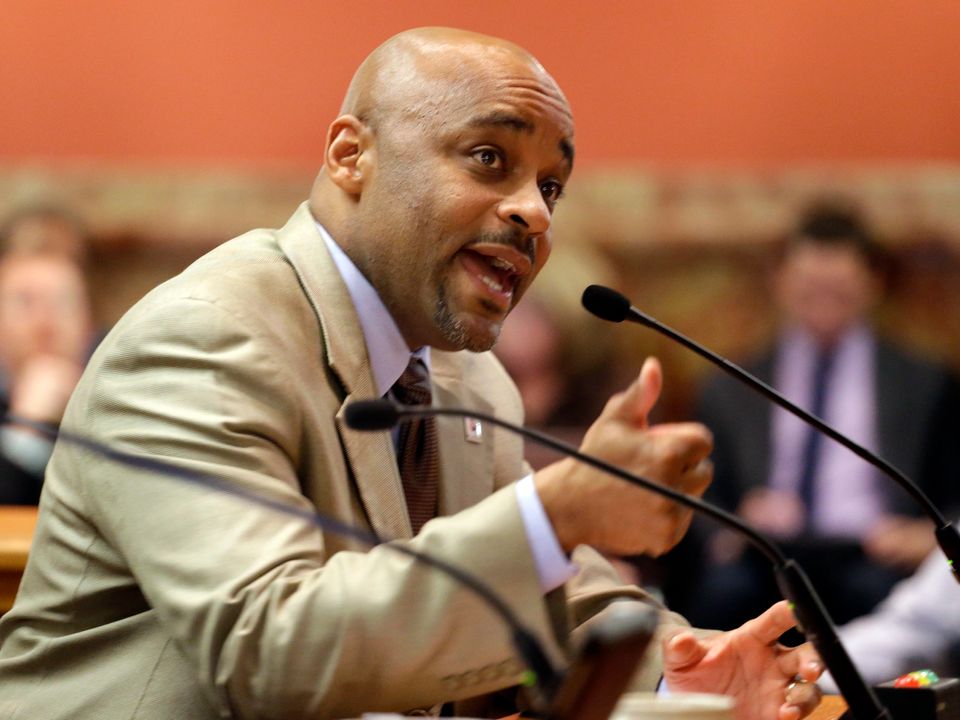 1 / 12
Denver Mayor Michael Hancock testifies in favor of the Civil Unions bill before the Senate Judiciary committee at the Capitol in Denver on Wednesday, Jan. 23, 2013. Democrats are expected to take the first step to grant Colorado gay couples rights similar to marriage with a civil unions bill that's one of the most emotional issues for lawmakers this year. (AP Photo/Ed Andrieski)
AP