How can I possibly answer that question without screaming, crying, raging...?

For the first time, I can say with a heavy heart and tears in my eyes, I know how: Go to Srebrenica, as I did.

Visit the hundreds - thousands - of mothers and sisters who still grieve. Visit their children's and brother's graves. Ask them what the defining difference is.

They, at least, have something tangible to mourn. There are also those whose cries for help to the international community have been ignored; mothers and daughters who beg the world to help them find the remains of their sons, husbands, brothers, fathers.

My own father lost his parents. Not just them, but his entire family. Killed near the River Drina - the same waterway that marks the border between Srebrenica and Serbia - during an entirely different war, no less brutal. This was 1943 - 1945. And it was also genocide.

Given my father's heritage, you might think that I would have already learned what there was to know about loss, about war, about ethnic cleansing. I didn't. I just knew my father's sadness, his nobility, having to suffer the knowledge that his parents never got to meet their grandchildren.

My father also lost his son. To ethnic cleansing. To genocide. Again, at the hands of Serbian aggression.

I now know my father's pain. My name is Sanela Catic, known as Diana Jenkins. I am a daughter. I am a mother. And I was a sister once. I was born as Bosnian "Muslim" in Sarajevo. I never celebrated any of my birthdays in my twenties. I spent those years fighting for my very survival, losing my home, my friends and my family. I never said goodbye to my brother. I never even made it to his funeral. He never celebrated any of his birthdays after his twenty-first.

Despite all of this, despite my heritage, I didn't know - not truly - the difference between war and genocide, between aggression and ethnic cleansing. I didn't have the real answers as to my father's pain, to my pain. Not until I visited Srebrenica.

I stood next to the Serbian and Bosnian Presidents, watching archive videos and documentaries on Srebrenica. The horrors on those tapes are almost indescribable, but there was one troubling, puzzling aspect that upset me the most.

In those videos, Ratko Mladić, the monster who is still wanted for his horrible humanitarian crimes, kept referring to the Bosnian children, women and men that he was killing as "Turks."

Why, I asked, were my people being referred to as 'Turks'? Bosnians are not Turks; my brother and I had never even been in a Mosque. Instead, we had grown up in Communist Yugoslavia, schooled in science, mathematics, Darwinism and Marxism. 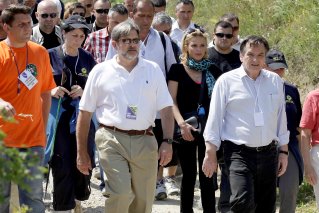 Then it dawned. For Bosnia's oppressors, the suffering forced upon so many was borne out of a 500-year old grudge; that the mindless vindictive horror could possibly be related to a 14th century dispute had never entered my mind. But here it was, clear as day - Mladić and his murderers thought of Bosnian Muslims as Turks.

Before I was brave enough to answer those questions myself, I had dinner with the mothers of Srebrenica and asked them first.

Their answer was a resounding no. As is mine. Because I was a sister once. I am a daughter. I am a mother. And, what those men did, was not war. It was evil.