One-hundred-seventy-six civilians were killed by police in January and February, according to news clippings collected by killedbypolice.net.

Of course, the greatest outrage of all is that no one really knows how many people are killed by police annually. FBI Director James B. Comey said last month, "You could tell me how many people, the absolute number, bought a book on Amazon. It's ridiculous I can't tell you how many people were shot by police in this country last week, last year, the last decade."

Most people killed by police are not armed with a gun. Only a small fraction of perpetrators are killed during or after a gunfight.

The people killed by police are generally not nice guys. They are deranged with mental problems, drug addicts, drunks, car thieves, shoplifters, vagrants, wife beaters--punks of all kinds and generally up to no good. But, they don't deserve to die.

A typical example is the shooting of Antonio Zambrano-Montes, a depressed father of two who worked in an orchard near Pasco, Wash. A few weeks ago, police got a 911 call of a man throwing rocks at cars. When they arrived, the suspect ran away. 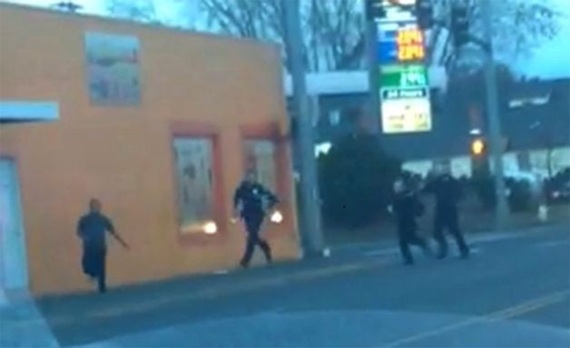 The video is very clear and shows three cops chasing him for a while, yelling for him to stop. Finally, Zambrano-Montes becomes exhausted after running in circles and eluding the cops. He stops and turns back to the chasing cops, as if to give up, raising his hands--no weapon in sight. The three cops are about 20 feet away and shoot Zambrano-Montes six times in the chest.

The video, which shows that he was clearly not an immediate danger to the police, is shocking. But, cases like this are almost always ruled as justifiable homicide. 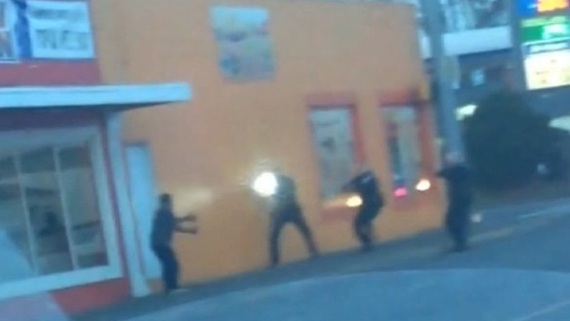 Last Sunday, another video of a police killing emerged. A dozen cops converge on a drunk, homeless man in the Skid Row section of Los Angeles. The man, who had been diagnosed with mental illness, flails his arms, apparently after being shot with a Taser, and falls to the ground. Six cops jump on him, beating him with their fists and billy clubs. He is on the ground.

Five burly cops are on top of the frail homeless man.

The next thing you hear is six shots tearing into his chest. The LAPD later said that the homeless man tried to get a policeman's gun. No weapon was found on the dead man, and the crowd becomes incensed. You can hear a man on the video screaming:

"He aint got no fucking gun."

"I remember when one cop was all it took to subdue a homeless man without anyone being hurt or harmed. Now?!...... It takes half the police force and a scud missile to subdue a homeless broken down old drunk.......... They can capture a man alive after he blows away half a grade school with an arsenal of weapons but they can't handle a homeless man? They can capture a man after he kills people at a Batman movie but the homeless drunk?.... He's a home grown terror cell so we better blow him away. Get the picture?"

Even if all the police accounts are accepted without question (the next day they released a picture of an officer's gun still strapped into its holster and a claim that the homeless man had his hand on it), the triviality of the crime compared to the ultimate deadly result is shocking.

Police in other developed countries deal with many of the same problems: large number of immigrants, joblessness, alcoholism, mental health issues, domestic disputes and Islamic terrorism. Yet, they kill a fraction of what police in the United States do, who killed about 1,200 civilians in 2013 (or so was reported). The difference is shocking.

Police in countires like England, Wales, Australia and Germany kill, on average, about two to three people per year.

We have an epidemic of police murders in this country. It's not that cops are bad people. But, there is a brutal, unconscious culture in almost every police department in America. This unprofessional culture was highlighted in the emails released in a recent report by the Department of Justice.

A report issued Monday by the President's Task Force on 21st Century Policing acknowledged how difficult this culture will be to change, task force member Tracey Meares wrote.

If policies conflict with the existing culture, behavior will not change. Consistent enforcement of rules that conflict with a military-style (police) culture, is nearly impossible, Meares said. Behavior is more likely to conform to culture than rules.

"Why are we training police officers like soldiers?" asked the Presidential Task Force's interim report. Although police officers wear uniforms and carry weapons, the similarity ends there. The missions and rules of engagement are completely different. The soldier's mission is that of a warrior: to conquer. The police officer's mission is that of a guardian: to protect. The rules of engagement evolve as the incident unfolds. Soldiers must follow orders. Police officers must make independent decisions. Soldiers come into communities as an outside, occupying force. Guardians are members of the community, protecting from within.

Proper training is clearly not a priority right now. Politicians and police brass figure that most people just want the bad guys taken care of--and don't much care how. And public mindset is what sometimes gives them a 007 license to kill. For the most part, the rest of us law-abiding citizens all understand the people the police are killing are not angels.

The police haven't been trained to not take things personally. They want civilians to respect them. They think the only way to get this respect is with fear and the threat or use of physical violence.

When they are, even minimally, trained, the results can be nothing short of miraculous. In NYC, police kill people at one-third the rate that they do in Miami or Los Angeles. Decades ago, NYC police were banned from shooting at fleeing cars (too dangerous for bystanders). This order dramatically cut down police killings of civilians, from an average of 71 dead from 1970 to 1972 to an average of 11 from 2011 to 2013.

If simple regulations similar to those in NYC were put in place nationwide--like don't shoot at fleeing felons--we could probably save up to 500 lives per year.

The idea that brutal police conduct is justified by the dangers they confront, is an obvious pretext. Contrary to popular belief, police work is not among the most dangerous occupations.

No policemen have been killed in the line of duty by a gunman so far in 2015. Five policeman died in ordinary auto accidents. Four died of heart attacks. One died by accidental gunfire from another cop at a shooting range.

Inevitably, there will be some policemen shot down by criminals this year -- the recent deaths of officers, notably the two NYPD detectives who were shot execution-style in Brooklyn, are stark reminders of the risks officers face -- but so far this year it hasn't happened.

The Presidential Task Force took notice of the statistics. A large proportion of officer injuries and deaths are not the result of interaction with criminal offenders, but the outcome of poor physical health due to poor nutrition, lack of exercise, sleep deprivation, and substance abuse.

Nearly half of those officers were not wearing seat belts, although the Task Force "recommends" that all officers be required to wear them. It remains a law for the rest of us citizens.

Another factor that proves fatal to many police officers is their unhealthy weight, often a result of sitting in a patrol car all day. Eight out of every 10 law enforcement members nationwide are overweight, a recently released report by the FBI said.

Researchers found that law enforcement personnel are 25 times more likely to die from weight-related cardiovascular disease than from the actions of a criminal.

Officer suicide is also major problem. A national study using data of the National Occupational Mortality Surveillance found that police died from suicide 2.4 times as often as from homicides.

Clinical psychologist Dr. Laurence Miller testified before the Presidential Task Force, saying supervisors would not allow an officer to go on patrol with a deficient vehicle, an un-serviced weapon, or a malfunctioning radio--but pay little attention to the maintenance of what is all officers' most valuable resource: their brains.

Parts of this story were cross-posted in the Washington Monthly.