The coordinated terrorist attacks in Paris claiming the lives of 128+ people and injuring at least 200 at the time of this writing are a tragedy beyond measure.

As a volunteer and journalist in the Syrian refugee camps, Moria and Kara Tepe, on the small island of Lesvos in Greece, I questioned whether it was safe or even right to stay, given that many of the refugees are young Syrian men, a small percentage of whom might be aligned with ISIS.

While no one can guarantee violence won't erupt in Lesvos, it hasn't. And it's clear to me that the volunteers from over 100 aide groups working here aren't going anywhere. 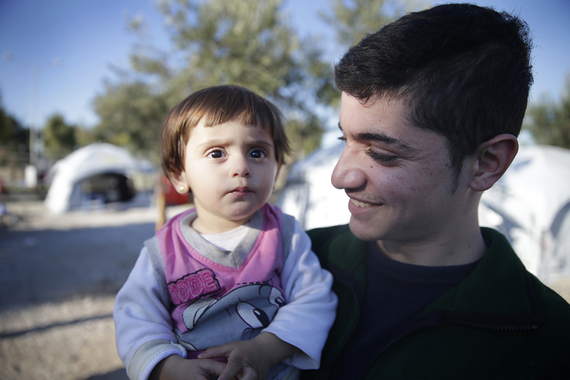 Emma, a student from Holland, came to Lesvos this summer to complete a course at Aegean University in keeping with her master's degree in Migration Studies.

This was around the time there was an explosion in the number of refugees fleeing Syria arriving on the island by boat via Turkey. The influx leapt from 120 refugees arriving daily in late July, to 1,000 per day on just one of Lesvos's many beaches.

Emma decided to volunteer with the non-governmental organization, Starfish, headed by Melinda McRostie, proprietress of The Captain's Table, a popular restaurant in Molyvos.

Melinda created Starfish because refugees began arriving in droves at her restaurant's front door, many of them hungry, thirsty and hypothermic from their hazardous sea crossing.

These were the lucky ones. According to the Christian Science Monitor 3,440 refugees have either gone missing or been drowned because the boats provided by Turkish traffickers have capsized due to overcrowding.

Traffickers ask 1200+ Euros per person to cross the six kilometers between Turkey and Lesvos so it pays to put as many refugees aboard as possible.

During good weather and calm seas the cost of a ride can double. The more dangerous the weather and sea, the cheaper the ride. 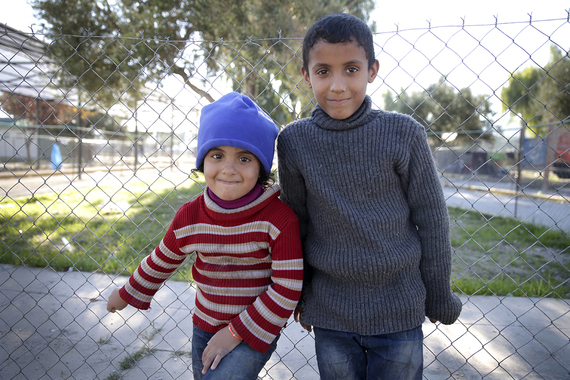 Starfish provides food, water and other essentials for the refugees when they land and helps them board buses that will take them to either Moria or Kara Tepe where they can register to legally leave Lesvos and begin their long, treacherous trek through a coming winter in hopes of finding shelter and jobs in Germany, Holland or any EU country that will have them.

When I asked Emma, a blue-eyed blonde, if she felt safe continuing to work with refugees in light of the situation in Paris she gave me an unequivocal yes, saying that 99.9% of the people she's helped have been "so lovely and beautiful." 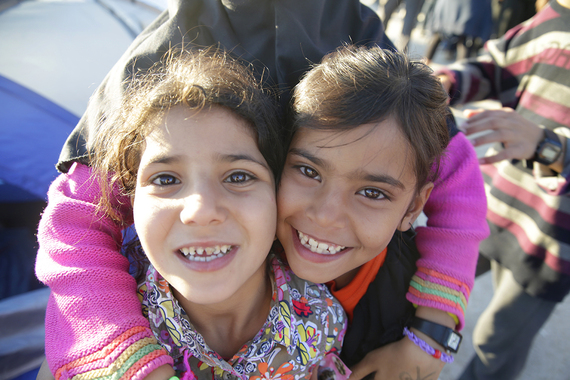 As I interviewed Emma amongst a slew of volunteers from Israel, the Netherlands, the UK and more, we were informed eighteen rafts had been sighted on the seas coming to Lesvos from Turkey.

We dashed down to the shore to help.

The irony wasn't lost upon us that we were rushing to aid people enduring one of the most traumatic moments of their lives while the sun shone brightly, the Aegean sparkled aquamarine and the most popular tourist beaches in Greece, including Skala Eressou, Eftalou and Anaxos, could not look more inviting.

When we arrived refugees, relieved to be safely ashore, were given tickets to legally board a bus that would take them to the camps where they'll begin the registration process. 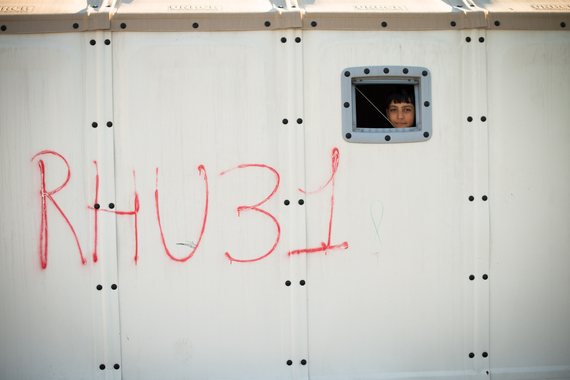 I met Geir, a paramedic volunteer from Norway, on the beach. He's been saving lives for the last several weeks on the island.

When I asked if he'd stay, given the terrifying circumstances in Paris, there wasn't a moment's hesitation. Geir plans to volunteer for two more months with the blessing of his teenaged children back home in Norway. They assure him he couldn't be doing anything more important right now.

This became patently clear when Geir told me the story of the night he found three adult refugees huddled beside a table in front of a restaurant having just disembarked one of the Turkish rafts. They were soaked to the bone, teeth chattering, shaking uncontrollably and utterly confused due to shock.

As Geir came closer he realized there was a small Syrian child, about one year old, on the table between the adults.

She was motionless and blue. He immediately performed CPR then tucked the child beneath his shirt, wrapping her tightly with his jacket and rushed her to a medical tent. He held her for close to five hours until he could be certain she would live.

Recounting the story Geir became visibly emotional. The grateful father told Geir that his daughter's name was Bahar, which means "from the sea."

There was a second child that Geir could not save. As he performed CPR on the girl her weeping father called his daughter's name over and over as he stroked the back of Geir's head.

Geir thinks the father didn't realize he was touching him. I wondered if the tender gestures were the man's unconscious yearning to transmit life through Geir's body to his daughter. 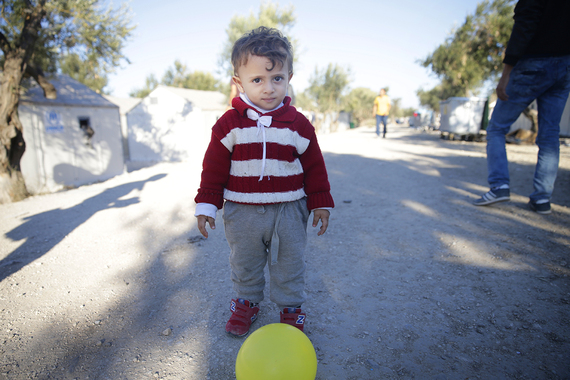 I have my own story. One I've replayed in my head when dread lodges in my body while I watch the scenes of horror in Paris unfold on TV.

Just yesterday, prior to the attacks, I visited Moria.

It has the most dire reputation of the refugee camps because it's where the single Syrian males are housed along with what are considered "economic" immigrants from Afghanistan, Sudan, Somalia and Iraq.

Moria is surrounded by high concrete walls topped with barbed wire and looks more like a prison than a refugee camp.

I didn't want to go. The idea of being surrounded by men who look like the frightening images I see in the news from my safe Los Angeles bubble was daunting. I had to remind myself that I'm here to help, but more importantly to challenge my own xenophobia. 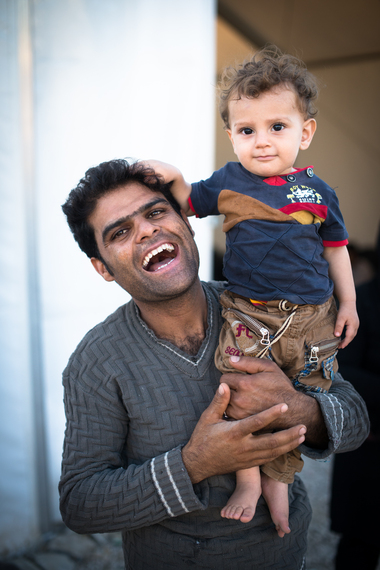 (A family in Kara Tepe. Photo credit by Jade Beall.)

Upon arrival I felt nervous, so while my colleagues shot photos and conducted interviews I sat on a low wall and tried to become a fly.

A few feet away a thin man who looked about forty (but was actually twenty-one) spoke to me in unaccented, but limited English.

He introduced himself as Arnash, an Afghani police officer who was brutalized time and again for arresting criminals his superiors didn't want arrested

Arnash is trying to find a safe place to live where he can earn enough money to get his parents out of Afghanistan. However, he'll most likely be sent back in the next month as he's not considered a refugee.

The first thing Arnash did was offer me some of the sunflower seeds he was eating. Later I took my belongings out of my backpack and gave it to him as he had only documents on a string around his neck and the clothes on his back.

As I was leaving the camp ten minutes later Arnash ran up to me, glad he'd found me. He was worried I'd leave before he could return the car keys I'd inadvertently left in a zipped pocket of the backpack.

Like Emma and Gaer and the tireless volunteers I've had the privilege to meet and talk to (Fred and Antoine Morlet of Volunteers Coordination Team Lesvos, to name just two) all I've witnessed are people struggling desperately to maintain their dignity as they embark on the dangerous, uncertain journey to provide safety and sustenance for the husbands, wives, and children they love as passionately as we love our own. 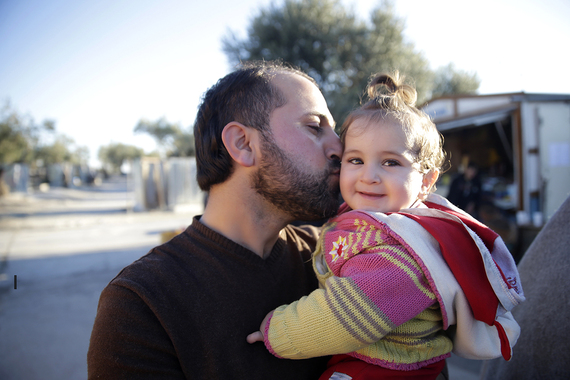 Jamie Grumet, president of NGO Raise It Up Foundation has organized this trip. You'll soon be able to send donations for refugee relief to Raise It Up. But you can donate now to Starfish HERE.

To stay abreast of what's happening on the ground in Lesvos you should follow the Volunteer's Coordination Team headed by Fred Morlet HERE.