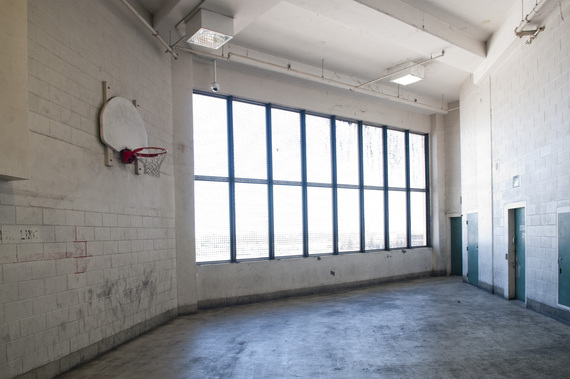 There's an eerie tension in the atmosphere during a prison lockdown, like energy waiting to detonate. We teach yoga and meditation at Twin Towers Correctional Facility, a male facility downtown LA that takes the overflow of women from other facilities. The day of the lockdown, we were at the California Institution for Women (CIW) in Corona, as guest teachers.

We were disappointed that we didn't get to interact with the prisoners as many are lifers -- some even infamous -- which would have been a different challenge for us. Our women are either waiting for hearings or trials, or serving nominal sentences by comparison (a few days to a few years). They are often moved willy nilly in the middle of the night, called "moving bodies." Because Twin Towers is unpredictably transitory, I tell my instructors, "You have 90 minutes to make a difference."

We were just two when we first went into Twin Towers, De Jur Jones, a Delta flight attendant, who spends most of her free time teaching yoga to at risk populations, and me. We went in like cowboys, not knowing what we were doing, just that we wanted to share yoga and meditation with incarcerated women. Our sponsor was skeptical ("volunteers come and go"), the guards were suspicious, and the prisoners were baffled. No one really knew why we were there. It was so alien, that I sometimes felt like saying, "We come in peace."

We lingered that day at CIW, though we knew that the lockdown wouldn't end before we had to leave. But I like to observe, because the prison experience always produces something fruitful. The sun was so hot, we sought shade by the entrance building, watching two guards employ a Jerry-rigged system of lowering keys in a bucket with rope pulley from the second floor to the ground level.

One of the guards asked De Jur why she taught yoga to prisoners. De Jur recounted how she'd come across an article written by a San Quentin lifer who said he lived for the days "the yoga man" came, and that even though he was going die in prison, his spirit had been liberated. His story ignited a desire in her to teach yoga to the incarcerated. "We don't come to teach exercise," De Jur told the guard. "We teach yoga as spiritual therapy, because all of these women have been traumatized in one way or another." I saw a light of understanding go on in the guard's eyes. Hopefully that prison guard will be more receptive in the future, not just for the prisoners, but for herself, too.

Though I would like the experience of teaching lifers, my particular calling is teaching yoga and meditation to women who are going to return to society. We teach yoga and lovingkindness mediation in hopes of giving incarcerated women tools to cope with trauma, including the trauma of being incarcerated. Though only 200,000 women are actually incarcerated, more than one million women are under the supervision of the criminal justice system. Yoga groups like ours are reaching a minuscule fraction of these women.

Teaching women who have never done yoga or meditation is a battle for spiritual real estate. Their hearts and minds are already taken up. Like De Jur said, they've been traumatized, and it comes out in different ways -- arrogance, anger, indifference. Many of them see us, at least initially, as a respite from the tedium of their pods. Some are so shattered emotionally, their eyes are empty. Others are disruptive, mouthing off and clearly not that interested in yoga. We work with whomever attends the class. We teach the concepts of self-love and self-compassion. And as it turns out, those ancient swamis knew what they were doing when they developed a system that unites mind, body and spirit. We often see the same bursts of light in the prisoners' eyes, as the notion of loving oneself is new and deeply therapeutic.

There's been a lot of buzz lately about "fixing the system," including President Obama going into a maximum security prison and speaking forcefully about ending mass incarceration. I root for prison reform. Meanwhile, even though there may not be quantifiable statistics that prove that yoga prevents recidivism, our purpose is to infiltrate and claim as much spiritual real estate as possible. We teach yoga to incarcerated women because we believe yoga can help them go on to experience the full expression of their lives.