We can now add Iranians to the list of the thousands of people around the world making their own version of Pharrell Williams' smash hit music video "Happy."

But the Iranian version is a little different from the others. You won't find dozens of people smiling, clapping and dancing in the streets of Tehran. Instead, you'll see a few people confined to filming inside someone's home while only glimpses of outside can be seen from the rooftop and backyard of an apartment.

The concept of Pharrell's video is to dance freely in the streets and be happy. It's simple but not an easy thing to do when you're living in a country like Iran where the government prohibits certain types of music and liberties. Since the 1979 Islamic Revolution, Western-influenced music has resided in an underground culture. The government must approve pop music before being played on state radio and television. State officials can either deem music to be 'halal', acceptable and others 'haraam,' forbidden.

Despite some obvious limitations, Tehran's version of "Happy" still achieves its purpose by spreading some good old-fashioned joy. In the process, the group of young Iranians are also dispelling stereotypes. Ask most North Americans what they think of Iran, and the hostage crisis is typically what people remember. Images of white-bearded, turban-clad clerics shouting "death to America" is usually what comes to mind for many. In stark contrast, this music video shows fun-loving, attractive Iranians with a chic fashion sense.

The Art Director of the video, Reihane Taravati wants the world to know that Iranians are happy people too. "People of Tehran are happy! Watch and Share Our Happiness! Let the world hear us! We are happy and we deserve to be! Iranians love happiness. Tehran is a lovely city." Taravati adds, "you can still find happiness in Iran. This video has been made by some of the Pharrell fans in Tehran, Iran. We wish happiness for all the people around the world. We made this video in 8 hours using iPhone 5S. We enjoyed every single second of making it. Hope it brings smile on your face."

In the past two weeks, they've had over 100,000 hits on YouTube. With every click comes a greater understanding of different cultures and acceptance that people all over the world share the universal goal to be happy. 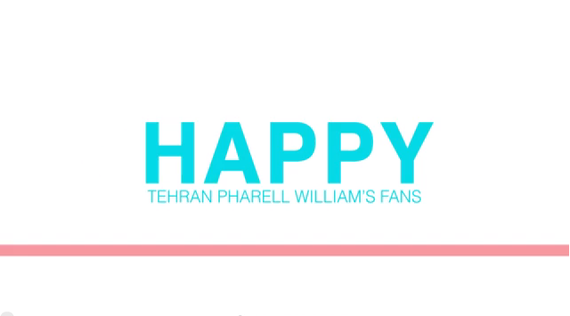