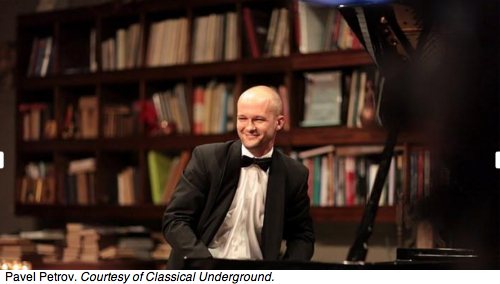 When I heard the Russian-American pianist Pavel Petrov plays Skriabin's music for left hand alone at Classical Underground earlier this month, I was amazed that one hand could produce so much mystery and magic. And the soulful beauty of the music and the playing moved me the closest this critic can come to tears. The opportunity to hear him play a complete recital, and for both right and left hands, will be a great treat.

Born in a small city of Pyatigorsk, in the Caucasus Mountains of Southern Russia, he made his solo debut at the Bolshoi Hall of the Moscow State Conservatory at the age of 14. Since then, he has received critical acclaim for his performances throughout Russia, Europe, Asia and North America.

He is one of those musicians whose artistic core is so focused and centered that there is almost no physical surface evidence. Trained in the rich traditions of the Russian piano school, Petrov graduated from Moscow Central Music School for gifted children and earned a Master of Music degree in piano performance, pedagogy, chamber music and accompaniment from Tchaikovsky Moscow State Conservatory in Moscow, Russia. He was a student of Valery Kastelsky who was a pupil of legendary Stanislav Neuhaus. 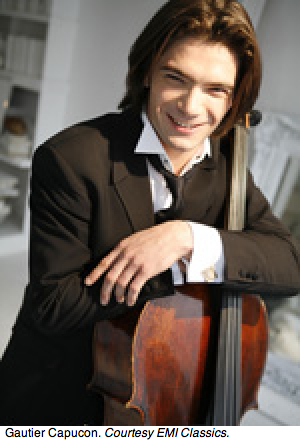 Not only is this a great program--if you've never heard Dvorak's Op. 76 Symphony, you're in for a breath of spring--you'll get to hear one of the two Capucon brothers, the one who didn't marry new anchor star Laurence Ferrari.

Like Matt Haimovitz, Gautier plays a beautiful Matteo Goffriller cello, and has done so for more than 12 years. "It's an incredible cello, very wide. We say that musicians play a little bit like their instrument. I believe in this because on stage you have to be honest, you can't hide. It's wild," he smiled, "maybe the cello would say the same about me."

It's always a special opportunity when the Prazak Quartet's in town. Their most outstanding recorded accomplishment, a complete Beethoven cycle strikes an unusual balance between classical restraint and romantic color. The combination of gorgeous playing, moderate speeds, subtle inflections and spare rhetoric form the basis of a deceptively flat interpretive approach that creates a deeply involving inevitability which becomes riveting in long sequences like the slow movement of Op. 127 and the variations movement of Op. 131.

Following Beethoven's dynamic and tempos markings with scrupulous accuracy, the Quartet plays with casual virtuosity, first violinist Remeš totally unfazed by the occasional high-lying challenges that typically make even the best of the competition sound slightly uneasy. The homogeneity the four players achieve, including a staggering richness of internal chording and detail, never masks the sounds of the individual instruments. Only when the last ounce of motor energy is called for, as in the Presto of Op. 131, do they let the side down.

Newcomers to this cycle, who are used to more obvious interpretive "attitude" or more heart on the sleeve passion, may at first find the Pražák's style lacking in urgency and glamour. But as they begin to realize how comprehensive the concept is, and how brilliant the execution, they will be glad there are four preceding installments to collect.