I'm late at reading all the dissents to the 5-4 decision making marriage legal across the country for gays and lesbian, but Clarence Thomas said something so extraordinarily illogical and ahistorical, it has to be noted:

I'm actually surprised he didn't mention concentration camp prisoners in the Holocaust--that would have been the crowning glory of his quiet hysteria. 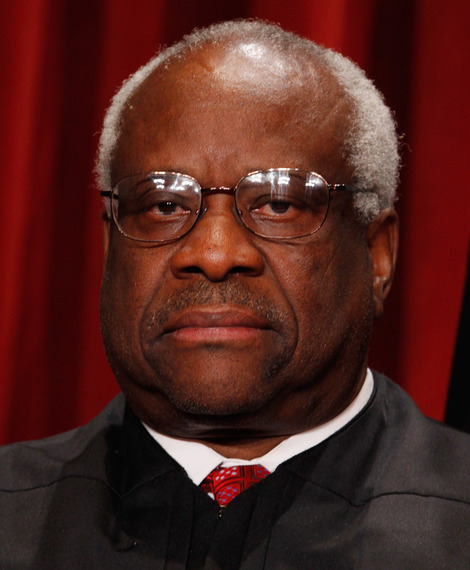 Anyone who's read memoirs of freed slaves or read about the American internment camps during WW II knows that Clarence Thomas is, simply, full of shit. Not only that, he sounds like a profoundly cruel man utterly lacking in empathy. As for his historical insight, he's either an idiot or willfully ignorant. The greatest challenge for slaves and for those interned--like those who suffered far more horribly in Nazi camps and the Soviet Gulag--wasn't only survival if their lives were threatened. They struggled to maintain their dignity when they were treated as anything from second class citizens to subhuman creatures unworthy of life.

Slaves were property. They were disrespected, beaten, whipped, raped, sold at a whim. Doesn't he understand that? The Japanese-Americans in WW II internment camps were deeply humiliated, separated from their homes, communities, and cities; they were segregated, isolated, and treated as potential enemies of the United States. Doesn't he get that? The struggle for dignity in the face of cosmic isolation and shame is a common thread in the testimonies you read about those experiences.

Glimpses of Clarence Thomas's reasoning seem to reveal a cruel, twisted mind that make him sound like a sociopath, and Scalia sounds almost reasonable by comparison. No wonder Clarence Thomas is usually seen scowling.

Lev Raphael is the author of 25 books in a wide variety of genres which you can find on Amazon.