Liz Insogna: Clarity, after our last conversation in your studio, I thought about your work quite a lot, and the images began to shift from painted portraits into art works that resonate as archetypes of healing and reconciliation. I'm wondering if you might be able to give some insight here on the original impetus for your most recent works, The Breast Portrait Project, and the context through which it all began.

Clarity Haynes: Thanks, Liz. Our recent conversation was helpful to me. I realized that it's been difficult in the past to be completely candid about this question, because it feels risky to talk about things like spirituality and healing in contemporary art discourse.

The Breast Portrait Project is an ongoing, social, practice-based work that first took shape in the late '90s, at a pagan, earth-based women's spirituality festival set in rural Pennsylvania. I had started doing these torso portraits, or breast portraits -- first of myself, then of friends -- and offering them at Womongathering was the first time I did portraits of strangers. Doing portraits there helped to define the project as a space for celebration as well as emotional healing (in myself and others) from all kinds of body-related shame and trauma. The portraits were a way of re-imagining the body as divine, whole, multi-gendered and sacred. The process mattered more than the product, though the product was integral. It became a kind of ritual: subjects sat for a painted portrait that took about an hour to complete, and I documented the encounter by photographing them with the painting afterwards. My intention was for sitters to experience transformation of some kind in their experience of embodiment, and in that spirit I asked each participant to write down some thoughts after posing. The writings helped facilitate healing and catharsis, and were a way of transforming individual stories and voices into a collective history. 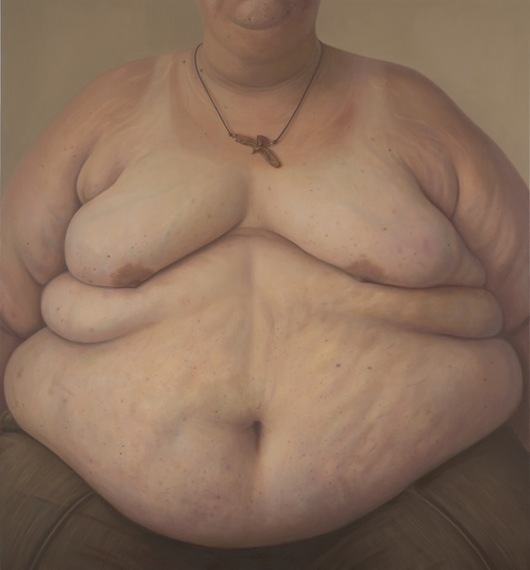 LI: Wow. This process sounds really beautiful and certainly integral to the inherent value within the paintings. I think there's a lot to say for this kind of work and what it means on a whole. It's really wonderful to begin to incorporate words like healing and spirituality into contemporary discourse, as well as what that means in this particular moment in time. Do you believe that there is a specific kind of healing necessary for the current moment in time? Is there something within all of recorded history that is in need of healing within the framework of interlacing beliefs/forces/patterns under the system we've labelled as the patriarchy?

CH: I do think the feminine is in need of healing in our world -- and that we need to be unafraid too to recognize ourselves as healers. The feminine is an energy, a fabulous force -- and it lives in very diverse bodies. It is degraded and abused in our world, and women, cis and trans, are still on many levels seen as property -- in some contexts more blatantly than others. In my opinion, patriarchal religion is one of the major forces that we who identify as female have to heal from. Our culture is influenced in incredibly deep ways by ideas of the divine as masculine. 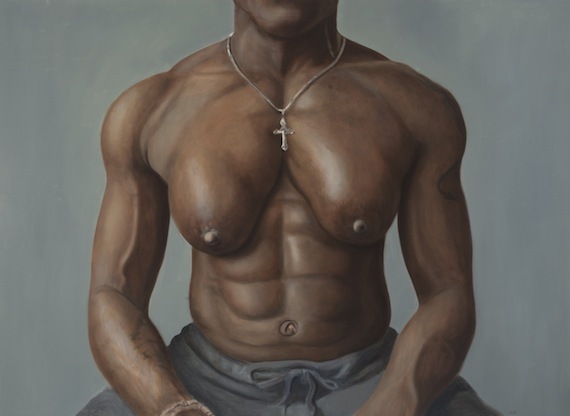 LI: I love how your work involves the notion of women healing other women, because in my opinion this is the key to beginning to restore, and reconstruct. As another aspect of abuse toward the feminine is that of it turned inward, the feminine against what is feminine -- and I can think of a whole slew of abuse of women and girls toward their own bodies -- in a sense (their) intention, however unconscious may be trying to take power back into one's own hands, so to speak, of abuse. So instead of it coming from an outside force -- it's an interior one. This is why a project such as yours is important on a really intimate level, as it allows others to take part in a reconstructive intention with the way that you've envisioned the process.

Is there a specific moment or series of moments in this process that has stayed with you or prompted a deepening of your relationship with the work? If you're able to share...

CH: Your description of the tendency of women and girls to turn against ourselves is right on. It makes me think about the period I went through in high school of being anorexic -- it was about rejecting my mother, taking control. I stopped menstruating. It actually wasn't until I seriously decided to become an artist, at age 16, that I started eating normally again. You could say that art saved my life -- so it doesn't seem like such a stretch that I could believe that it could keep on saving my life -- and heal others, too.

What the portrait process is for the sitter really depends on their intention. Many people have consciously approached the experience with a specific issue in mind that they want to move forward with. I really just provide the space for them, and I think by literally being a witness -- sometimes silently, sometimes listening to music; in the case of the festivals, in sight of other people; sometimes talking about their experience, sometimes just chatting -- they then are able to experience what they need to. It really takes courage for people to do it. Especially if they are coming to it with this awareness.

An example is a woman who survived a bad burn as a little girl, from the stove. She had scars all over her torso and arms. She never wore short sleeved shirts and had a huge amount of shame. Also, guilt because her sister, who was babysitting her at the time, got in trouble. And her mother always gave her clothes that covered her up, as she grew up, so she took on even more shame. Her sitting was a conscious act of trying to intervene in her own story, experientially -- so that her body would literally have a new memory. A memory of sitting in the sunlight, in a safe space, being witnessed and accepted. 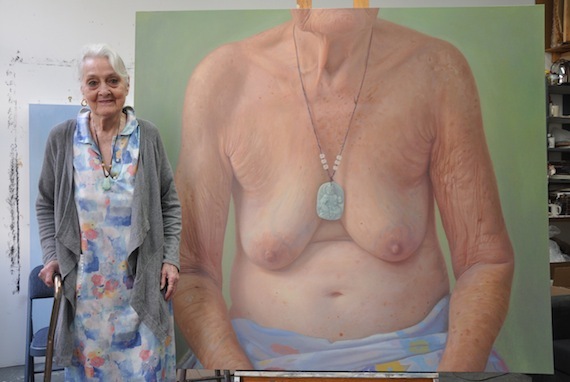 Clarity Haynes, Jaece, participant, with portrait in progress, 2013. Courtesy of the Artist

Clarity Haynes studied at the Pennsylvania Academy of the Fine Arts before earning her MFA in painting from Brooklyn College, CUNY. Her work has been widely exhibited, most recently at the Leslie Lohman Museum of Gay and Lesbian Art in Manhattan, and Life on Mars Gallery in Bushwick. Her work is represented in The Brooklyn Museum's Feminist Art Base, and is the recipient of many awards, including the Community Arts Regrant Award from the Brooklyn Arts Council. She has taught and lectured at numerous institutions, including The New York Studio School of Drawing, Painting and Sculpture, Adelphi University, and Rutgers University. Haynes lives and works in New York City, and is a member of the Corpus VI and tART collectives.

For more information on Clarity and to view her works, please visit her website at www.clarityhaynes.com

To hear a recent audio interview between Clarity and I, that is part of a larger project, Goddess, Speak; please listen here: https://soundcloud.com/fulguresoterica/ishtar-liz-insogna-and-clarity-haynes

Liz Insogna is a painter in New York; www.lizinsogna.com

Art for the divine feminine