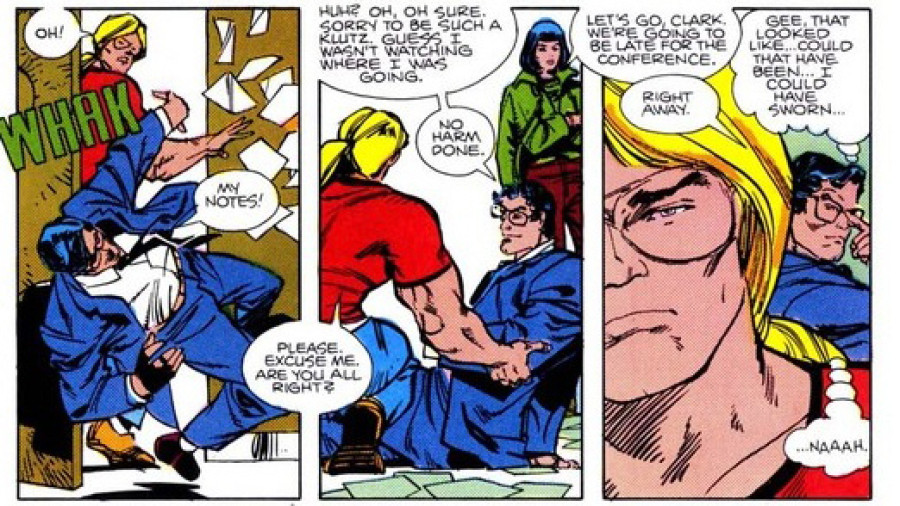 As early as 1976, Clark Kent -- aka Superman -- has been hiding within the Marvel universe as a reporter with a penchant for covering superheroes at a "great Metropolitan newspaper." This despite being the property of comic rival DC Comics, where Clark Kent is known for his journalism at the Metropolis news organization, The Daily Planet.

Marvel and DC have teamed up a few times and even inserted a super soldier character named Clark Kent into a Captain America plotline. But this Clark Kent as reporter was never made official in Marvel comics.

The Huffington Post spoke with the Marvel comic book writer who introduced the homage, Chris Claremont, to find out how the idea came to be. Additionally, John Byrne, one of the original artists of Marvel's Clark Kent, explained that it seems this all just started as a "goof."

As fansite The Appendix to the Handbook of The Marvel Universe has extensively addressed, a Clark Kent character has appeared in some form or another over a dozen times within the Marvel universe, but it all starts with Claremont.

He explained that Kent's appearances were meant as a "sight gag" and that, along with artists Dave Cockrum and John Byrne, he simply thought it'd be funny. An official crossover between the two companies would have been "inappropriate," but just as they'd snuck-in other gags, the Clark Kent joke was simple enough to be acceptable and served a larger purpose of adding a sense of levity to tense dramatic action.

"We wanted to hold on to the fact we're not total stiffs, we like having fun with it," said Claremont. 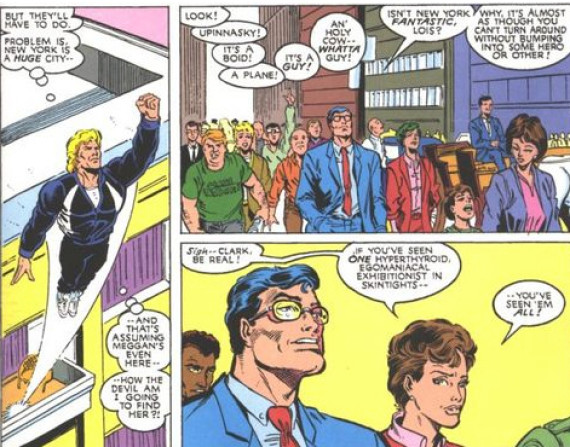 Byrne would go on to draw for the Superman franchise after inserting these little jokes. The homage was all just playful fun, or as Claremont explained, a sort of "spitball":

There were a body of rules, we couldn't crossover, we couldn't team up easily, officially. But we were all young punks in those days. No one says anything about throwing spitballs and occasionally they would turn into really fun little moments of storytelling. So, it all starts basically with, "Hey, wouldn't this be cool."

They didn't receive negative comments from DC, but, according to Claremont, he and his co-workers did make sure to never cross the line with the rival company's lawyers.

"In the case of a character like this, if you put too much focus on it, it's not a joke anymore and then you run the risk of ... goodness knows what kind of response mechanism with lawyers and what have you," said Claremont. "In both instances, now you're dealing with, what, 10 to 12 figure corporate structures."

Neither of the original creators of Superman, Jerry Siegel and Joe Shuster, reached out about the homage to Claremont and only "over poker" with some guys from DC did it ever get mentioned.

Claremont explained the reasoning behind avoiding confrontation, noting that "civilians in the background" were "not quite as seriously trademarked or tracked as they might be today." DC was the "competition," but the corporations were smaller at the time and it was possible to get away with this kind of thing.

"We just did it as a -- for lack of a better term -- a giggle," said Claremont. "And the trick was to make the character visually recognizable to the intended viewer, but not actually label them properly so the legal department wouldn't get their noses bent out of shape."

Claremont said that if he had the reins for a Superman comic, he "would not be amiss" to put a "young photographer from the Big Apple" into the scene. In those days there was just more freedom from these corporations' lawyers.

According to their in-depth analysis of Clark Kent's appearances, the aforementioned fansite about the Marvel universe concluded that Kent's powers and abilities include his work as "a capable newspaper reporter and television journalist."

A savvy reporter in the Marvel universe, Kent is often seen on television or liaising with high-level executives, such as the once editor-in-chief of The Daily Bugle, Joe Robertson.

Of course, going too deep into this Clark Kent's reporting abilities sort of kills the joke and the purpose of his inclusion. Claremont said, "He's a reporter for a great Metropolitan newspaper. If we ever described him, that was the way we described him. Which Metropolitan, we don't know. Which newspaper? Who knows."

The most recent known appearance of Clark Kent in the Marvel universe occurred in 2006, in an issue of "Fantastic Four" where Kent was seen at a crash site in Oklahoma.

So, how did this go unnoticed for so long? Surely the Man of Steel shouldn't have been so hard to miss. Part of it was that this was just a joke amongst friends at Marvel, not trying to make this so overt that they got into legal trouble. As Claremont said, there was no way this secret character could have had a true narrative evolution or too much involvement in the script at least "just to avoid giant corporate fists coming down on our heads."

But the inclusion was certainly made for the fans, at least those who were the closest readers. Claremont explained his philosophy for his comic creation as a whole and how Clark Kent fits into his goals as a writer:

The idea was that we established characters and stories along a baseline that was exciting for readers of all sensibilities and ages, but if you were a little more hip, a little more aware, a little more on the ball, you could spot the various visual tropes that we were presenting and realize that perhaps we were suggesting something deeper.

Along with Claremont, artists Cockrum and Byrne were creating for both the casual and the super-fan in the early days of Marvel. If you knew how and where to look for something that came and went faster than a speeding bullet, you might just have caught a young reporter steel a scene every once in a while.

Superman Through The Years