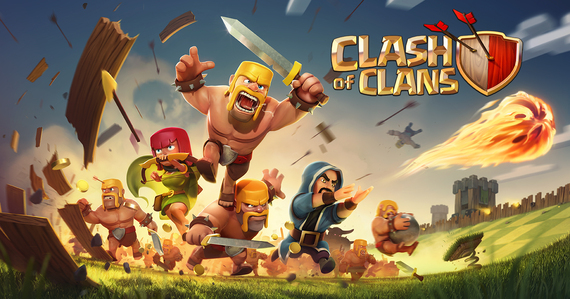 Being a 33-year-old academic, I found it hard to rationalize to my friends and family my infatuation with Clash of Clans, a childish but rather addictive online strategy game, until I met Hosam. While waiting for his refugee application to be accepted, the 24-year-old man from eastern Aleppo spent much of his time online through his Samsung phone, browsing news, chatting on Whatsapp, and playing Clash of Clans. As Hosam explained, fighting in a clan from his Syrian hometown and coordinating battles against clans they were randomly matched with around the globe was one of the ways he maintained spiritual ties with the land and community he had left behind.

Hosam's experience piqued my personal and academic curiosity, and eventually prompted me to explore how Syria's conflict is reflected in the virtual reality of a game, highly popular among Syrian youth.

After some browsing, I joined the "Idleb Heroes," a clan of forty players from my family's province in the northern part of Syria, a region that since March 2015 has come under the complete control of the Islamist opposition.

The clan I found is a strong community of young males between 16 and 24 living in various parts of the Sunni-majority province, playing on cheap smartphones charged by external batteries to keep the game on even during the daily blackouts. However, lack of electricity was not the main obstacle: when the Internet was cut off in the middle of a clan war, many of our carefully devised strategies went to waste. For the clan, Clash of Clans seemed to be more than a simple game, as the chat function was eventually used for reporting on the Assad regime's air strikes, and also to check whether all the members were alive.

Although the clan was essentially non-political, sometimes it proved rather challenging for members to suppress their emotions. Once, after being matched with a player called Hezbullah in an individual battle and scoring an all-three star victory, I shared the video with my fellow clan mates. Soon, warm congratulations arrived with overtones of anti-Shia sentiments, something I had never experienced during the long summers I spent in Idleb before the war, where Lebanese Shia Hezbollah were generally celebrated as a force of resistance against the Israelis, the "Zionist entity" of the state propaganda.

After a month of comradeship, I bade farewell to the clan and began my six-month journey as a lonely mercenary, wandering between the front lines of the Syrian clan wars, joining the war-torn country's most notorious clans.

I chose clans with at least 25 members (out of a maximum fifty) and at least 10,000 clan points (proving the commitment of the core members). When browsing Syrian clans, it was striking to see how the majority of players made every effort to keep the game as a politics-free field, warning would-be members in the clan description to refrain from any talk on politics and sectarian affiliation.

However, an equally significant number of clans proudly declared their political sympathies by naming themselves after fighting factions and militias. Searching both in English and Arabic, I found more than fifty clans calling themselves "Syria of Assad" and significantly more referring to "Asad" (Lion) in one way or another, while the number of politically motivated groups was uncountable.

I chose a loyalist group of forty-five players, where the single condition for being accepted was to declare "For Allah, Syria, and Bashar!" Soon I found myself in the company of experienced players with pseudonyms referring to a variety of sectarian backgrounds, coming mostly from government-held Damascus, Hama, and western Aleppo.

The government-friendly war machine seemed to be effective: in clan wars, leaders and elders donated a Level 5 dragon to each participant to protect the base, something unimaginable in the case of the Idlebi clan, where players could at most only afford to donate archers and barbarians.

Though politics was not a general topic of the chat, emotions ran high when the clan was randomly pitted against groups from Saudi Arabia and the United States, the two main foes of the Assad regime. These battles became matters of honor, with members coordinating attacks more carefully than usual, mocking the enemy, and telling jokes like "boars are effective against pigs," referring to the character of barbarians riding on boars.

While Americans largely proved to be easily defeated enemies, we were regularly trounced by the Saudi gamers who had no qualms about using their credit cards to buy capability-boosting gems from the game store. Or at least that was how members of our Assadist clan explained the defeats, most probably to save face. Still, the explanation was by no means groundless: four of the top ten clans on the global level are usually from the Arab Gulf region.

In the ensuing months, I joined a number of clans with names referring to the Syrian Army as well as ones proudly calling themselves "Shabbiha" (spirits) after the notorious pro-regime militias, generally coupled with references to President Assad or the name of cities and provinces.

After "defecting" from the regime, I joined the "Free Syrian Army," a group of young people, many of whom are now refugees in Turkey. Being an opposition fighter was not easy. It was typical to have a player apply for membership and then, after having been admitted, to curse us, label us as traitors and American puppets, and then leave. Some even went as far as asking for "troop donations" and using the donations for their own individual wars, then utter their curses and leave.

However, just like in real life, some front lines were quite impenetrable. Perhaps because of my Sunni-sounding profile name, I was shunned by Shia clans like "Shiat Ali" and "Ahl al-Bayt" as well as by clans with names referring to Alawite villages on the Syrian coast.

To my surprise, clans like "al-Dawla al-Islamiyya" (Islamic State) and "Ansar al-Dawlah", referring to the Islamic State, were not interested in my application either. Two strong Kurdish clans, both called PYD, referring to Kurdish militants in northern Syria, accepted me only until they realized that I do not speak Kurdish. Speaking of Kurdish clans, it was striking to see how, similarly to the clans of the Islamic State, they set their location as "international," a clear sign of their refusal to acknowledge the national borders of Syria.

Despite the refusals, I did not give up my intention to go hardcore. Luckily, the Islamic State's main rival in global jihad was very welcoming. However, when browsing clans referring to the al-Nusra Front, al-Qaida's Syrian affiliate, the strongest ones I found were not in Syria, but in Lebanon and Kuwait, two countries with individuals and groups maintaining strong links with the Syrian radicals.

After joining a Kuwaiti clan, I found that half of the members aged mostly between 17 and 22 were Kuwaitis, while the rest were Syrians residing in the Gulf state. For the Sunni clan, fighting against Shias in general, and the Iranians in particular, was always a matter of honor. When pitted against Iranian players in individual battles, virtual al-Nusra fighters chose to launch attacks even if the prospect of booty in gold and elixir were significantly less than the amount invested in equipping their troops.

Tired of wandering, I headed back to my Idlebi clan to find that much had changed during my six-month absence. Although the members were more or less the same, I was informed that Abou Joud, one of our elders, was "missing" in the wake of a Russian airstrike. Still, his name is officially still there among the members. Another member traveled to Turkey together with his brother, with dreams of heading to Sweden, which, however, did not prevent him from remaining a committed member of the clan.