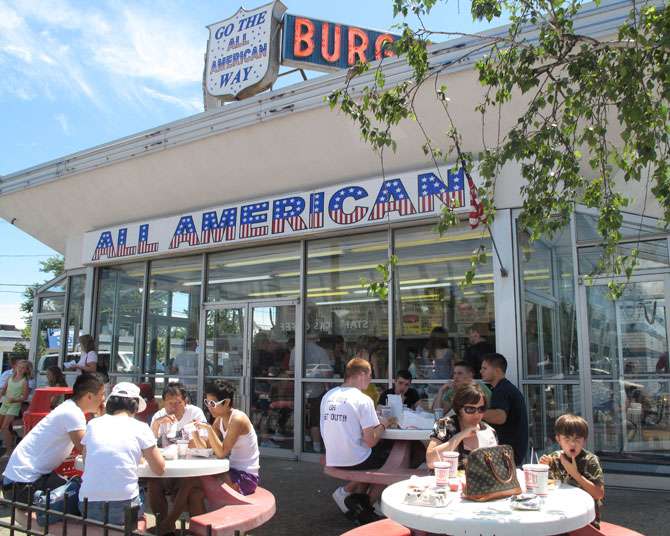 It's hard to imagine, but if common wisdom is to be believed, the drive-in restaurant precedes McDonald's by about 19 years. See, the first McDonald's Bar-B-Que restaurant opened in San Bernadino, Calif., in 1940 with the prototypical carhop service that characterized drive-ins since the first one (supposedly), Kirby's Pig Stand opened in Dallas, Texas, in 1921. Of course, like most surviving drive-in prototypes, McDonald's has long gone from drive-in to drive-thru. Gone mostly, are classic round drive-ins designed by architects like Wayne McAllister, and their carhops. But there are places that keep the drive-in restaurant tradition alive.

Take for instance All America Drive In on Long Island, which Phillip Vultaggio opened in 1963 -- it has been making believers out of Massapequans ever since. Built in the style of '50s fast food joints, All American is basically a glass-enclosed counter and kitchen in the middle of a huge parking lot. This is a drive-in not a drive-thru, as Iole Marshall, Mr. Vultaggio's granddaughter, noted, "A drive-thru is with a window where you order. A drive-in you pull up to with your car."

It's refreshing and comforting to know places like All American don't just survive, but thrive. Even more rare though are drive-ins with curbside service. But the tradition of paper hat-clad carhops and roller-skating waitresses taking orders and rolling up to your window balancing trays of fast food does live on. Take The Varsity, in Atlanta for instance -- this drive-in pilgrimage for fast food mavens has been doing its thing since 1928. Any time you get a hankering for a greasy cheeseburger and onion rings, you know you can pull right into the lot, chat with a friendly carhop, and have your food brought to you.

From Spartanburg, South Carolina's Beacon Drive-In and the Sycamore Drive-In in Bethel, Conn., to and Frisco's in Long Beach, Calif., there are more of these classics left than you might think. Wherever they are across the country, this list of America's great drive-in restaurants adheres to what you could argue, for all civilization's progress, is still the ultimate in roadside eating: climate control (windows and AC), your choice of entertainment (radio, etc.), and your favorite guilty pleasures served to you by carhops.