In 2009, I declared myself through with drawing comics. I'd just completed a graphic novel, Mercury, and the months hunched over a drafting table, listening to the Twilight audiobooks, had taken their toll. I decided to focus on my writing, which would at least allow me to escape my house from time to time. I rented a tiny office over a pub in Asheville, NC, and I was there, mucking through a sci-fi screenplay, when my e-mail pinged. It was one of those e-mails you have to read two, three times, just to make sense of it. Would I be interested in adapting Madeleine L'Engle's A Wrinkle in Time into a comic?

A year earlier, a librarian from Texas had passed through town and interviewed me over coffee. How, she asked, did I feel about adaptations? I told her they didn't interest me; I couldn't imagine spending years on a story I hadn't even written. Except one: A Wrinkle in Time. L'Engle has been a favorite author of mine since childhood, when I read the Time Quartet again and again, and her influence has left its fingerprints all over my work. I wouldn't mind spending a few hundred pages with Meg Murry. And how often does one get to draw a tesseract?

But when it came to signing on for real, I got cold feet. What if I couldn't do the book justice? What about the people-the people on the Internet-who throw up their hands and moan about their ruined childhoods whenever anyone adapts anything? Neither of those thoughts was as frightening as the possibility that someone else, someone who didn't love the book as much as I did, would take the job and make a mess of things. I agreed to do it.

Rereading Wrinkle for the first time since adolescence, I was struck by two things. First, the way I'd always pictured Meg is not the way L'Engle describes her in the text. Second, Meg gets into a fight at the beginning of the book and spends the whole story with a black eye-a critical detail, but an easy one to forget in a novel, when you're not constantly reminded of it. I wonder if L'Engle herself pictured Meg with a shiner, or if it often slipped her mind, too. I realized I'd have to approach the book with new eyes and see it as it is, not as I remembered it. It occurred to me that the book is a period piece, and I acquired several Sears & Roebuck catalogs from the 50s and 60s to research Meg, Charles Wallace and Calvin's clothing and styling.

The process of drawing the graphic novel was rewarding, but arduous and often frustrating. I first wrote a script, then spent six months drawing a rough version of the book. Immediately after I finished the rough, my husband and I loaded up the car and moved across the country to Los Angeles. Not only was I starting over in a new city, but I was starting over with Wrinkle, going back to the beginning of the book with editorial notes in hand and drawing it all again. This second draft, featuring more refined artwork and inks, took just over a year-an impressive clip for a nearly 400-page book. To put its size in perspective, I needed a month just to draw the speech balloons! I battled tendonitis and loneliness and was frequently not my best self, but now that I can hold the book in my hands, flip through it, see the story unfold page by page and spread by spread, I know it was worth it. It's not a labor of love if you don't labor.

I'm once again on hiatus from drawing comics, but since completing my adaptation of Wrinkle I've entered one of the most creatively fertile periods of my life. I've been writing up a storm. I directed a short film. I went to ice cream school, which is actually quite science-heavy; Dr. Kate Murry would approve. All that time living inside Ms. L'Engle's story has changed my work, and changed me, in ways I don't fully understand. My universe is bigger now, more layered, deeper-and yet, the far places are not so far away.

Check out these illustrations from the book:

Hope Larson is the illustrator of A Wrinkle in Time: The Graphic Novel [Farrar, Straus and Giroux, $19.99].

PHOTO GALLERY
&#039;A Wrinkle In Time&#039; Graphic Novel
Download
Calling all HuffPost superfans!
Sign up for membership to become a founding member and help shape HuffPost's next chapter
Join HuffPost 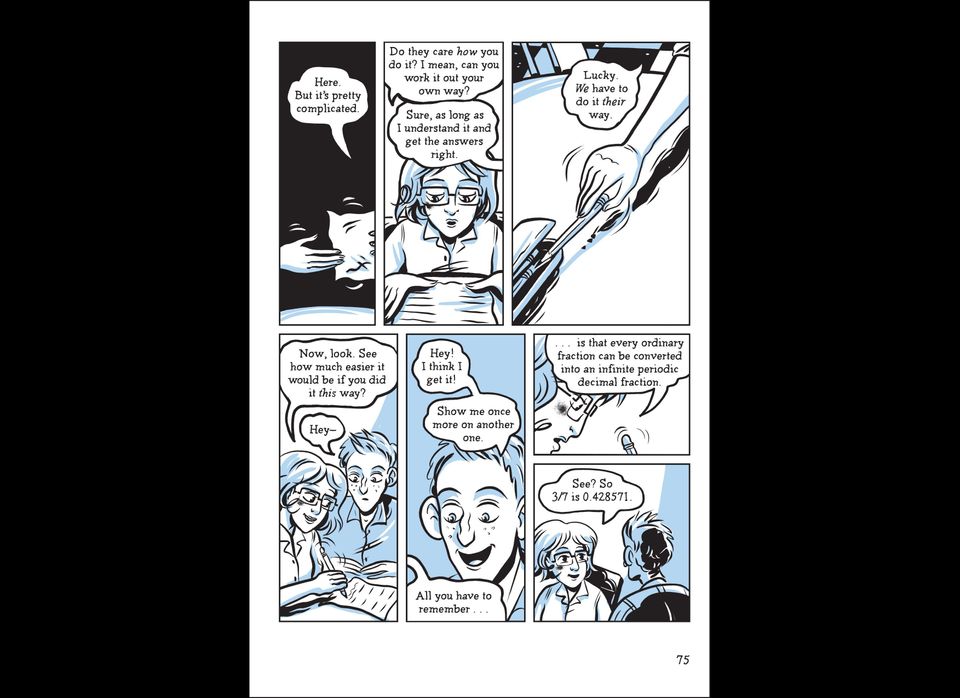