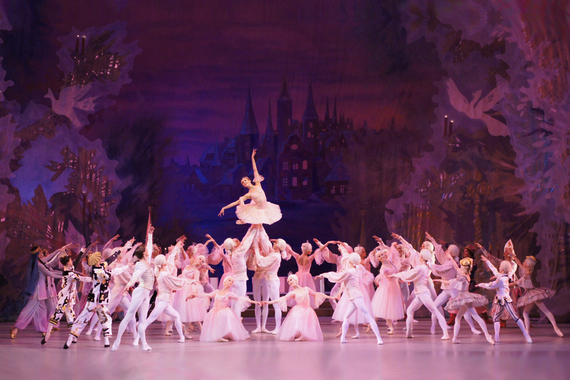 The scene outside the Mariinsky theatre was just as it might have been when Tchaikovsky wrote the Nutcracker: snow flurries coming down, below zero temperatures, crowds of people dressed in fur against the cold, and the cheer of the holidays hanging in the air, palpable through the cold.

Why go all the way to Russia to see the Nutcracker? There can be no doubt that the historic Mariinsky theatre is the definitive venue to witness the spectacle originally created by Tchaikovsky, Petipa and Ivanov at the same theatre. The première of the work at the Mariinsky Theatre in Saint Petersburg was on December 18, 1892.

The Nutcracker ballet was presented on the historic Mariinsky stage on December 21, 2016 as part of the 234th season of the Mariinsky theatre. The performance lived up to every expectation, bringing the magic of the story alive for all those who were willing to be transported to the Land of Snow for a single evening.

As a trained ballet dancer, you learn to look for the finer points of the performance. Olesya Novikova, who was cast as Masha the Princess, hit every one of her balances during the pas-de-deux in the second act and her solo was very sweet and feminine, just as it should be. Alexander Sergeev played the role of the Nutcracker Prince very well, with bold, strong leaps along with a grace of movement that comes from his classical training.

One aspect of the Mariinsky ballet company that truly stands out is the legendary strength of the corps de ballet, not just great soloists. The two major corps-de-ballet waltz scenes were like clock-work, showing off the clean, simple lines that are characteristic of the choreography. The corps dancers' ability to dance in unison is impeccable. Each dancer individually is a master of nuance -- how they hold their heads, their port des bras, the angle of their turnout, etc. -- are all individually exquisite, but as a corps de ballet they are transformed into a unified corps with an incredible precision in their combined movement that is truly remarkable. The Waltz of the Snowflakes was stunning with the ethereal chorus in the orchestra pit, the corps de ballet executing their synchronized movements, and the ice-blue scenery and costumes on stage. 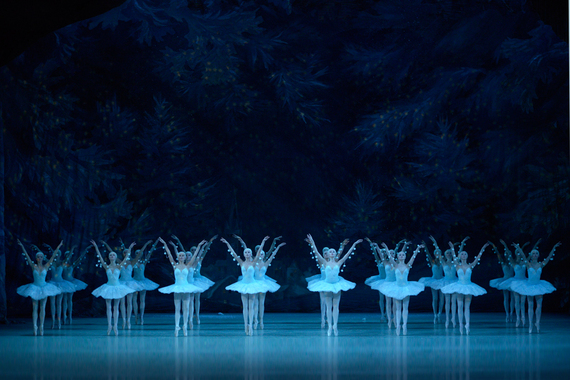 The production was more than just a repetition of beautiful choreography set to the exquisite score by Tchaikovsky. The attention to every detail on stage breathed life into every moment of the production, For example, the party scene included a short puppet show with marionettes acting out the scenes of the story on the miniature puppet stage that was setup for the party guests. The audience got to feel that childlike joy of watching a puppet show along with the dancers on stage.

It is well worth the effort to come to Russia to see such a legendary performance of the Nutcracker ballet, one of the most beloved ballets the world over at the holiday season.