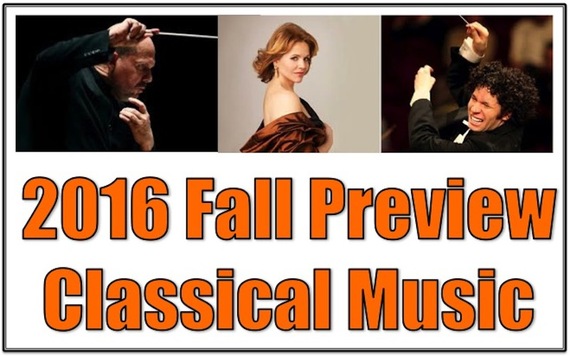 While there is hardly a clear division of time between the ending of the summer theater season in New York, with the New York International Fringe Festival concluding its run over the course of one weekend and previews beginning for the much-anticipated Broadway musical Holiday Inn only days later, the classical music scene is a bit more refined, coming "fashionably late" to the party.

The New York Philharmonic starts the ball rolling by presenting a week-long appetizer, providing the musical soundtrack to the screenings of two iconic films (West Side Story and Manhattan) prior to its "official" opening night on September 21st. At that time, Alan Gilbert conducts Corigliano, Gershwin and Dvořák's Symphony No. 9 (From the New World). The following week the Metropolitan Opera sets sail on Monday, September 26th with its new production of Tristan ind Isolde with highly-acclaimed Swedish dramatic soprano Nina Stemme. Carnegie Hall's opening night Gala on Thursday, October 6th follows, featuring Gustavo Dudamel and the Simón Bolívar Symphony of Venezuela, where they continue their residency with two other programs through the weekend. By this point, most of the other concert venues in the city are in full swing with all their varied programming. And once the season kicks in -- you're in for an exciting ride!

We at ZEALnyc are excited to provide you with some special "preview picks" from our roster of fantastic writers. New York City has historically been a "melting pot," but in the world of art and music, our city serves as the host to an enormous number of visiting domestic and international orchestras, chamber ensembles and soloists. "The best of the best" play our venues, and while recordings are wonderful, the real magic happens in the concert hall. So be there for one of these "once in a lifetime" experiences.

Royal Concertgebuow Orchestra, conducted by Semyon Bychkov (November 30th, Carnegie Hall). The best orchestra in the world makes a rare New York appearance, with what promises to be a ripping workout: the New York premiere of Theatrum bestiarum, Detlev Glanert's mesmerizing homage to Shostakovich, followed by Mahler's Fifth Symphony. Other orchestras may have more distinctive, or even more beautiful, sounds, but none is more committed than this one, nor as completely musical, up and down the line, through and through.

New York Philharmonic, conducted by Jaap van Zweden (November 17th-19th, Geffen Hall). Van Zweden's first appearance with the Philharmonic since being named its incoming music director, and an all-around test of skills, featuring the prelude to Act One of Lohengrin, Tchaikovsky's Fourth, and the New York premiere of Unearth, Release, Julia Adolphe's new viola concerto, co-commissioned by the Philharmonic for its incomparable principal Cynthia Phelps.

Mitsuko Uchida, piano, and Jörg Widmann, clarinet (April 2nd, Zankel Hall). Two great performers in a fascinating program of Brahms, Berg, Schubert, Schumann, and two solos, one for each player, by Widmann himself. Uchida needs no introduction, but Widmann, in case you missed his thrilling Mozart clarinet concerto as part of Gergiev's Prokofiev Marathon last year (don't ask; it made perfect sense in context), is her impish soul-mate, inhabiting each note of music with every cell in his body. This will be Widmann's New York recital debut.

Alan Gilbert conducts the Philharmonic in a concert of Das Rheingold (June 1st-6th, Geffen Hall), with a cast led by Eric Owens. This will not be Gilbert's final concert as music director of the Philharmonic, but it's far and away his most interesting choice of repertoire -- if you believe his detractors, it's certainly the most daring -- during this farewell season. If it's as good as some of his other approaches to the cosmic-sublime (Honegger's Jeanne d'Arc, the Ives Fourth, just to mention a few recent examples), it ought to be a real statement-performance, truly unforgettable.

Later that month, The Emerson Quartet, one of the great American chamber ensembles, will celebrate its 40th anniversary, with two concerts at Alice Tully Hall. The second of these, on October 23rd, looks particularly splendid: the fierce, irresistibly rhythmic Quartet No. 10 by Dmitri Shostakovich, an undisputed master of the medium; a new work by the ingenious and imaginative British composer Mark-Anthony Turnage (best known on these shores for his 2011 opera Anna Nicole); and, with cellist David Finckel as a guest, Schubert's immortal Quintet in C major, possibly one of the most sublime pieces of chamber music ever written.

On November 14th, also at Alice Tully Hall, the Eastman Philharmonia will make a rare New York appearance for the world premiere of a new song cycle for soprano and orchestra by Pulitzer Prize-winning composer Kevin Puts. Soloist will be Puts' fellow Eastman alum Renée Fleming. Also on the program are Ravel's ravishing Rapsodie espagnole and Prokofieff's protean Symphony No. 5, one of the summits of twentieth-century symphonic art.

Two days later in the same venue, insightful pianist and MacArthur "Genius" Fellowship winner Jeremy Denk, who is well-known for his illuminating juxtapositions of classic and contemporary works, will perform a program that spans seven centuries, including works by Machaut, Monteverdi, Bach, Mozart, Beethoven, Brahms, Debussy, Ligeti, and Philip Glass. Denk is sure to be the perfect guide for the pieces that are new to you, and will invite you to rethink the ones you already know.

Schubert's heartbreakingly gorgeous song cycle Winterreise is performed and recorded frequently, but regardless of how many times you've heard it, you really should catch the November 23rd performance at Carnegie Hall by the exciting and adventurous British tenor Ian Bostridge, with renowned composer Thomas Adès at the piano. Bostridge's Winterreise is refined, yet startling in its wide range of emotion, and Adès, who plays with enviable virtuosity and expressiveness, will be sure to both complement Bostridge and provoke him.

Continuing briefly into the new year, the American Symphony will present "Prague Central: Great 20th Century Czech Composers" at Carnegie on February 10th. Under the visionary leadership of conductor Leon Botstein, who has made unearthing neglected masterpieces his life's work, the orchestra will play works by Novák, Martinu, Suk, and Schulhoff. Martinu, who will be represented by his Symphony No. 3, is in particular vastly underrated, as is Suk (Dvorak's son-in-law), whose music is characterized by penetrating harmonic unrest and Mahlerian philosophical probing.

Two nights later, in Walter Reade Theater, the acclaimed Germany-based Morgenstern Trio will present an intriguing program of works by Boulanger, Tailleferre, and Mendelssohn. Lili Boulanger (not to be confused with her more famous older sister Nadia) showed early brilliant promise as a composer and would quite likely have gone on to be a major force in twentieth-century music, but died tragically at age 24. Germaine Tailleferre, the least known (and only female) member of the group of French composers known as "Les Six," wrote music that is unfailingly pleasant and full of playful harmonic twists. The justifiably beloved Mendelssohn Trio No. 2 rounds out the program.

New York City's classical season looks as exciting as any in recent memory, especially for those like me, who like to hear new music and less frequently performed works.

The New York Philharmonic is continuing with the popular new tradition of performing great film scores along live with a projection of the movie, in a series entitled Art of the Score. They are returning, understandably, to West Side Story (September 13th-15th), which I would like to see if only to witness that it is technically possible (to time the live orchestral performance with the original singing track, in particular). I'm especially excited about Woody Allen's classic Manhattan (September 16th-17th), which employs the music of Gershwin to such sublime and melancholic effect. To hear the orchestra soaringly play Rhapsody in Blue with that iconic black and white shot of the Queensborough Bridge will be pleasurable indeed.

The Philharmonic has its sights set on more serious literature this season, as well, including an exciting concert with the excellent Essa Pekka Salonen conducting an all-Kaija Saariaho program at the Park Avenue Armory (October 13th-14th). This concert features three N.Y. or U.S. premieres of works by this celebrated Finnish composer, whose opera L'Amour de Loin ("Love From Afar") will be the first work by a female composer performed by the Metropolitan Opera since 1903 when it premieres December 1st.

National Sawdust, a newish but vibrant performing arts venue in Williamsburg, has many programs of note happening this fall. One concert of interest is Timo Andres & Yevgeny Kutik (October 19th) Andres, a brilliant pianist and composer (and grandson of the late actress Marian Seldes) performing new music from Kutik's new album Words Fail. This will be the New York premiere of Andres' piece Words Fail, and the world premiere of Michael Gandolfi's Arioso Doloroso/Estatic, along with music by the very popular young composer Nico Muhly (and those old fogies Stravinsky and Mendelssohn).

That particular evening I would be torn, however, because concurrently uptown at Carnegie Hall, The American Symphony Orchestra returns (October 19th) for a timely program titled "Troubled Days of Peace" featuring two rarely performed one-act operas, Der Diktator by Ernst Krenek (1900-1991), an almost forgotten, but notable twentieth-century composer from Austria, is based loosely on Mussolini. This is followed by Richard Strauss's Friedenstag ("Days of Peace"), which like its composer, had a complicated relationship to the Nazi regime. (The premiere was attended by Hilter, but the opera expresses anti-war sensibilities, and seems to have been perceived as an affront.)

Further, of note is celebrated American composer (and pioneer of minimalism) Steve Reich's eightieth birthday, which will be honored by an all-Reich program at Carnegie Hall (November 1st), featuring a world premiere of a new piece entitled Pulse.

The conductor-less Orpheus Chamber Orchestra plays several interesting programs at Carnegie Hall, of most appeal to me is a program featuring pianist Fazil Say (December 3rd), in which they will play Mozart's exquisite Piano Concerto No. 21, Elvira Madigan, Rossini's Overture to La scala di seta ("The Silk Ladder"), Haydn's delightful The Hen symphony, and especially appropriate given the historical context of piano concerti in the classical era, a concerto of the pianists' own composition, his Silk Road concerto, which intrigues in its title alone.

I'm looking forward to this fall and holiday season in New York with its many exciting performances, both large and small. First off, the Philadelphia Orchestra comes to Carnegie Hall on October 10th to perform Mahler's 6th Symphony with Sir Simon Rattle conducting: anytime a great orchestra with a great conductor is in New York, something grand is going to happen! On November 3rd, Carnegie Hall and the Oratorio Society of New York will be rocking with Bruckner's Te Deum, one of the biggest pieces in the choral repertoire.

Then on November 10th the Berlin Philharmonic and Sir Simon Rattle will show off their 20th Century chops performing the Second Viennese School masters Schoenberg, Webern and Berg at Carnegie Hall, a must see of these most technically difficult pieces. Operatic soprano Diana Damrau's recital at Alice Tully on December 10th caught my eye: one of today's most sought-after performers coupled with harpist Xavier de Maistre promises to be a special performance indeed!

For the holiday season, the ultimate Christmas caroling group, the Vienna Boys Choir, returns to New York on December 11th at Carnegie Hall for a holiday concert entitled "Christmas in Vienna," which I'm sure will include many of the traditional and most-loved seasonal favorites. I also can't wait to hear the New York Philharmonic's Messiah from December 13th-17th at David Geffen Hall conducted by Alan Gilbert who will give this holiday staple a great interpretation for all of us to enjoy.

Christopher Johnson, Joshua Rosenblum, Brian Taylor and Jose Andrade are all Contributing Writers for ZEALnyc and write features and reviews on classical music-related events and performances.