Great stuff and lots of fun this month as Spring has sprung and really that's all that early music was meant to be about, or needs to be to earn our undying love and sympathy. And why sympathy? Because there must always be something a tiny bit sad when we take ourselves so far back in time to such idealized tunes and harmonies, and then eventually to have to return to our modern noisy world. Otherwise, no problem. 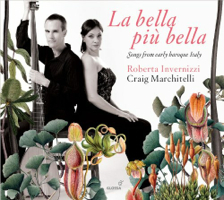 We're hearing more about Glossa now that Naxos has added to its U.S. distribution wing. The label's new recording featuring Baroque music queen Roberta Invernizzi, who might be thought of herself as "La bella più bella," but not in her usual dazzling displays of Handel, Vivaldi and other Baroque opera composers. Instead, the Milanese singer presents the wonderful, intoxicating, life-enhancing art of the Italian song repertory from the early 17th century, a time when courtly and polyphonic expression were giving way to the "moving of the emotions" by a solo singer accompanied by a single instrument.

It sounds so ravishing in Renato Dolcini's booklet essay, like a sumptuous musical travelogue, and so does Roberta Invernizzi. She sings songs by Kapsberger's (his "Ninna nanna"), Giulio Caccini and Barbara Strozzi, as well as Luigi Rossi (whose dream-like piece provides the album with its title). Three of Claudio Monteverdi's later works conclude this recital, in which lutenist and theorbist Craig Marchitelli accompanies and also contributes a number of solo pieces by Kapsberger, Castaldi and Piccinini. 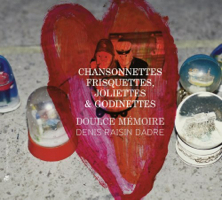 Celebrating the 25th anniversary of Doulce Mémoire, this wonderful new CD from the aptly named Zig Zag Térritoires label (named after their curiosity) allows you to hear "what people hummed in the streets, the artisans' workshops, and the houses of 16th-century France, and what women were supposed to think about their male companions and their performances, and men about the 'jolly game of push-and-shove.'" It's the free-spirited, popular, cheeky chansons of the Renaissance.

Founded in 1989 by Denis Raisin Dadre, Doulce Mémoire immediately established itself as one of the most inventive, original and creative early music ensembles with a particular genius for themed presentations and beautiful CD packaging. Their concerts, recordings and performances enable listeners and audiences to enjoy music of figures we in the early music world dream about including Leonardo da Vinci, Michelangelo, Rabelais and François I (some of whom, Doulce Mémoire assure us in inviting us to their annual festival, "had a profound influence on the Loire Valley and its famous Renaissance chateaux"). Their newest is one of their very best, offering Renaissance airs by Jehan Chardavoine, Clement Janequin, Pierre Certon, and more. (The "Chansonnettes" in the title refers to the encore Doulce Mémoire and Denis Raisin-Dadre play at their concerts.) 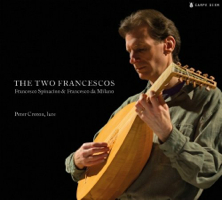 Another label that is benefitting from increased exposure and availability thanks to Naxos distribution is Carpe Diem, founded in 2008 by engineers Jonas Niederstadt and Johannes Wallbrecher. Carpe Diem records in old churches, monasteries and historic concert halls that offer ideal conditions for the instruments played and the sound being recorded. For his Carpe Diem debut the Swiss-American lute player Peter Croton plays a collection of ricercares and fantasias by the Italian lutenist-composers Francesco Spinacino and Francesco da Milano. The 15th century saw the lute emerge as a solo instrument, and the terms ricercar and fantasia were used for works created without preexisting models, improvisation being expected to drive the performance the way jazz does today. Not surprisingly Croton, who is also known for his contemporary and jazz-related musical projects, explores this beautiful musical world with the heart of a true improvisor, sparkling with creativity. 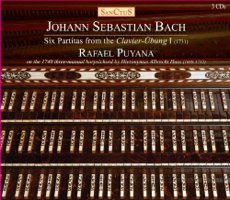 When I was in Bogotá last year for the Beethoven festival, Colombian pianist Blanca Uribe played a lovely recital and when her adoring audience demanded an encore, she responded with a kind and courageous gesture, meant to heal wounds and bring together old friends. In honor of the great Colombian harpsichordist Rafael Puyana, who had died on a month earlier in Paris, estranged from his native country, she played a sonata by his favorite composer, Domenico Scarlatti.

The moving tribute was sensed as such by the audience, even though she did not announce it as being so. Now Sanctus Recordings has released previously unpublished recordings of Puyana playing Bach's Six Partitas for Harpsichord BMW 825-830 on the unique, famed three-manual harpsichord of 1740 by Hieronymus Albrecht Hass. Besides Puyana's magisterial, inevitably anachronistic performances, the the 150-page booklet includes color pictures of the magnificent German instrument. 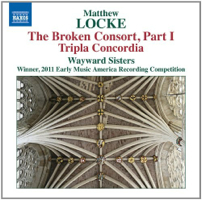 Wayward Sisters make their considerably less than wayward debut with a lovely program of Matthew Locke, the most prominent English musician of the generation before Purcell. The Broken Consort refers to a group with mixed instruments, and Locke's pieces entertained royalty with their surprisingly incautiously ambitiously chromatic tonal language and rhythmic quirkiness. The Composer to the Private Musick, as Locke was titled, was never happier than with surprisingly angular melodies and dramatic gestures "into the theatricall way'." This recording is the début release of Wayward Sisters, winners of the 2011 Early Music America/Naxos Recording Competition.