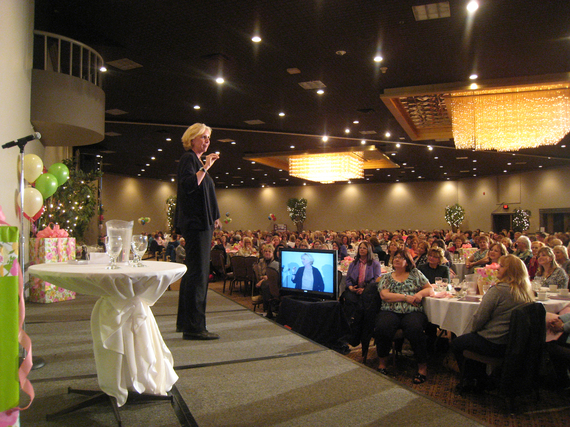 "I went up in a hot air balloon 2200 feet in the air," says Jan McInnis, whose taste in adventure is as zany as her comedic genius. "The scariest part was as we were climbing in, the guy asked us our weight. I'm not telling him that! I gave him my goal weight. This thing may crash, but that secret's dying with me!"

The above (copyrighted) quip was included in the latest Keynote Chronicle newsletter circulated by comedian McInnis, sometimes known as The Work Lady. She is also co-star, with Kent Rader, in the Baby Boomer Comedy Show.

It's hard to read The Keynote Chronicle -- or see McInnis onstage -- without either a chuckle or a guffaw, or two or three or more. And at the same time, you may fail to notice that the material is utterly without profanity, vulgarity or in-your-face sexual innuendo -- the basic elements of much of today's comedy. A Wall Street Journal article once noted that her clean comedy "still has plenty of attitude."

But does it pay the bills? Not easily at the beginning perhaps, but McInnis is making it work. "I fly in and out now," she says, reflecting only briefly on the long hours and tedious travels in days gone by.

McInnis grew up in D.C., the second of four children in a fairly traditional family whose home was in a nearby Virginia suburb. "My parents said they'd pay for college anywhere in the state," she says. "So I chose Virginia Tech, which was as far away as you could get from D.C." She earned a traditional (communications) degree, and went to work back in D.C. at a few traditional jobs, including the National Ocean Service and the National Academy of Sciences, where she worked on the original "Planet Earth" PBS television series. But her lifelong ambition to do stand-up comedy never let go, and at 34 McInnis started doing open-mike gigs. She spent two and a half years working at her day job while doing comedy clubs up and down the east coast. This involved grueling hours and often staying in what the clubs referred to as "Comedy Condos," that customarily housed "twenty-something boys." McInnis, meanwhile, was aiming for a manageable career. "The great thing about working in marketing (at the traditional jobs)," she says, "is that I knew about the convention market - as opposed to clubs." And The Work Lady was born. 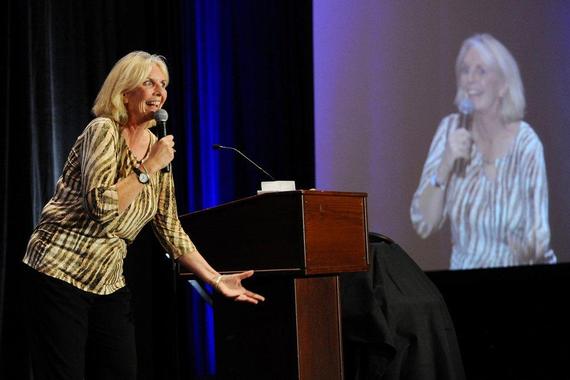 McInnis moved across the country to Los Angeles 16 years ago -- "It was either New York or L.A., because otherwise nobody's going to see me" -- and never looked back. From early on her parents were fans. "They heard me on the radio in D.C. a lot," she says, "and I made sure they only saw me at the good clubs."

There are apparently all sorts of clubs. "My goal when I started out working in tough one-nighters," she writes in a recent book, "was to get so successful that I'd never again have to perform in a room in which you can hear the blender."

On the road to what is today a highly successful career, McInnis performed at venues that would seem to make the noisy bar appealing: in a bakery, on a gigantic bowling alley with people inside gigantic, see-through bowling balls rolling by, on a turntable ("Lazy Susan for those of you over 50") that made a 360-degree lap every 10 minutes, and in "a multimillion-dollar gymnasium with a $20 sound system."

If you've missed McInnis at these or other appearances, you may be seeing her before today's political dust settles. She does a spot-on Hillary Clinton.