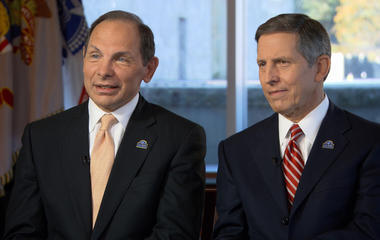 Today, Secretary McDonald will announce a massive re-organization of the VA on the heels of one of the biggest scandals to ever rock the second largest division of the federal government. In an interview that aired last night on 60 Minutes with Scott Pelley, Secretary McDonald, a '75 West Point Grad laid out the course of action he and his team are taking to repair the fractured pieces of the VA healthcare system. The Secretary, and his second in command, fellow '75 West Point Grad, Sloan Gibson, who used to run the USO, are traveling around the country to meet with veterans, workers, and administrators at VA hospitals. "Bob" as he like to be called is also personally recruiting physicians, and healthcare workers, and could be seen on the phone encouraging a young cardiologist to consider the VA, and to stop by and see him if he is in Washington D.C. There is a massive need for the VA to hire many more physicians and healthcare workers, and it is refreshing to see a government leader such as Secretary McDonald taking a big business approach to tackling such a huge problem. The leadership at the VA seems to recognize that they need to change the way the VA does business, and the way that veterans access their services, and there is no doubt that Secretary McDonald, and his years of running Proctor & Gamble are a great match to take this challenge head on.

By next year, the VA will have one website instead of the 12 it has now, and new patients will see a doctor within 30 days, and no one will wait to receive their benefits, and it is expected that up to 1,000 VA workers will lose their jobs because of the scandal earlier this year at the Phoenix VA, and other VA hospitals.

The VA should also take a big business approach to recruiting healthcare professionals to bring in the best and brightest talent to fill the more than 2,500 mental health professionals, and up to 28,000 doctors and nurses. It seems they are on the right track with Secretary McDonald giving current VA doctors a raise to compete with the private sector doctors, and he is also visiting teaching hospitals around the country to educate doctors on the value and benefits of working at the VA.

The turnaround of the VA will not happen overnight, but there is no denying that in such a short time, Secretary McDonald, and Mr. Gibson are laying the groundwork of transforming the largest integrated health network in the country. This is personal for secretary McDonald as he said on last nights interview with Scott Pelley "I served with a lot of these guys. And we were in very dangerous situations. And anytime you jump out of an airplane in a parachute, you're putting your life in danger. And as a jumpmaster, you're checking that person's equipment. And their life is reliant on yours. That's the kind of relationships you create. Those are the relationships that drive me to do this."