Names like Madeline Hunter, Harry Wong, Kristina Smekens, and Robert Marzano line the bookshelves of classrooms across the nation. Teachers know the best practices for classroom management, the sure fire way to make new vocabulary stick, and the "Yes Ma'am" approach for written responses. I was under the assumption that these techniques were all I needed to be an effective and happy teacher. It turns out that I was wrong. I was missing a piece so valuable, so crucial to the development of my students, and surprisingly myself, that I want to plead with teachers to clear some room on the book shelves for Dr. Brené Brown, vulnerability and shame researcher. Dr. Brown has courageously dedicated her life to shedding light on the power of vulnerability and a wholehearted life, the dangerous control of shame, and the process of rising after a fall. Because of her work, my life and classroom have been revolutionized, and I urge other educators to actively make it a part of how they teach. The following three lessons have transformed the way I deal with students and co-workers.

1) Check the story you're telling yourself.

Dr. Brown, in her latest book Rising Strong, mentions Anne Lamott's idea of the "Shitty First Draft" (SFD), stormy if in front of the kids, and how we often fill in the blanks during troublesome situations where we don't have all the facts. Many times the information we insert is erroneous and causes worry or anger. An unexpected outburst from a student, a terse e-mail from a co-worker, or an uncharacteristic comment from a colleague during a meeting can leave our minds racing and reeling with fictitious stories.

Brown says we have to check our SFDs. She encourages us to write them down or speak them aloud and get to the bottom of what we are telling ourselves. The problem stems from us holding up the lies we've created as truth, what she calls confabulations. In my first year of teaching, I had a senior walk into my English class and constantly fall asleep within 10 minutes of the bell ringing. I would politely wake him up each time, but it was inevitable that he would do it again. Each day I'd try to plan even more engaging lessons to make it impossible for him to even want to fall asleep, but he drifted off without fail. My SFD went a little like this: I am a terrible teacher. He can't stay awake even during my very best efforts. I shouldn't be doing this. He has to hate me, but there is no reason to. What's wrong with me? The story I made up was detrimental to my confidence as a teacher and completely fabricated by me.

Finally after I had enough of the dance of him falling asleep and me waking him up, I called him out into the hall. I was fully prepared for the speech of, "I don't care how bored you are; you need to stay awake and pay attention." Instead, I was told that his mother had lost her job a month ago, and he had picked up a job working the late shift at a fast food restaurant to help pay the family's bills. He wasn't getting home until 2:00 or 3:00 every morning. He said he enjoyed the class and was sorry he was falling asleep, but he just couldn't help it. My SFD was nowhere near the polished final copy. Had I asked right away instead of making up a story as to why he was sleeping, I could have helped him and myself quicker. I'm learning to hold my story in the light of truth and ask questions before my creative mind takes over. If we as teachers do this to ourselves, imagine what the kids are doing. Teaching them to navigate through this is an invaluable life lesson.

Brown, in Daring Greatly, introduced me to the Teddy Roosevelt "Man in the Arena" speech, and it felt like someone finally shook me awake and out of the systematic march known as my life. 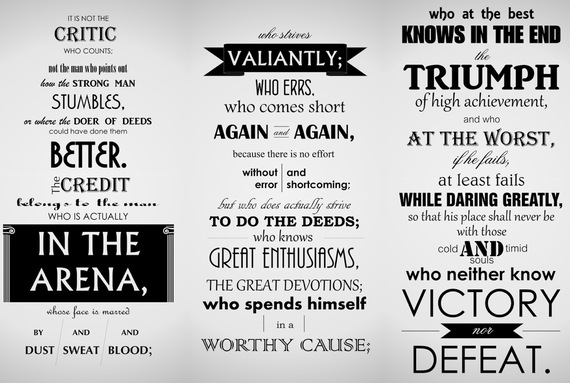 She pressed for people to stand up, be vulnerable, walk into the arena and fight for their dreams. With that comes bruises and falls so hard that it shakes the very core of who we are almost enough to make us wave the white flag and leave the fight, but she promised living this type of life was infinitely better than sitting in the cheap seats hurling criticism at those who are at least brave enough to try. To be vulnerable is courageous, and living a courageous life would always be better than coasting through a comfortable one.

As teachers, there are too many instances when we had an idea to share or a project we wanted to start, but we kept quiet because we didn't want to be judged or were too afraid to be heard. It wasn't until I stood up and walked out into my very own arena that I truly felt alive, that I finally felt like I was worth anything. Brown made me realize I would wind up at the end of my life full of regret that I played small simply out of fear of what the critics in the cheap seats had to say. I now am running a program that taps into my purpose and passion, and it would have never happened had I not followed the advice of Dr. Brown. I've been knocked down face first a few times, but my courage has always dusted me off and steadied my feet.

My students, however, are benefiting from this more than any story or grammar lesson I've taught them. I had a young lady who came up to me one morning wanting to create a video promoting kindness after a rough few days for the whole school. She was a bit more reserved, but the passion she had for this project was palpable; the only problem was that she would have to introduce the idea to our class. I looked at her and told her that it was imperative that she "show up and be seen" because she would regret if it never came to fruition or if someone else ran with the idea. That very day in class I opened up the opportunity for her to jump into her own arena. I didn't push her or tell her to enter; it was completely in her hands. After a quiet pause, I watched her grip her seat and stand up. Voice a bit shaky, she told them of her idea to try and unite the school with an inspirational video about love and kindness. We locked eyes as she finished, and the class started clapping. I clapped, too, not for the idea but for her bravery to even stand up and be heard. No lesson plan could ever top what I witnessed in that moment. I watched a teenager summon up all the bravery she had and be vulnerable. I watched a teen step into the arena regardless of the outcome.

3) If you're brave enough often enough, you will fall.

Brown states: "There is no greater threat to the critics and cynics and fear mongers than those of us who are willing to fall because we have learned how to rise." Failure. We spend our lives fighting to avoid it, and we have engrained the fear of it so deeply into the minds of our students that they would rather stand against the wall rather than be brave. Instead of teaching them that failure is bad, we need to teach them how to stand up after the fall because as Dr. Brown says: "If you're brave enough, often enough, you will fall."

I am well aware that teaching kids bravery and grit is not currently a common core or state standard, but I would be willing to bet that any future employer would place more value on a person who is willing to go out and try something new even with the possibility of failure looming over the person who knows to use a semicolon before a conjunctive adverb; therefore, we have to introduce them to people who fit this bill and discuss how the face plant and subsequent fight to stand up is courageous and worthy of praise. It's imperative our kids aren't afraid to try because they know they can rise even stronger than before.

I highly respect all of the educational thought leaders that schools build classrooms and curriculum around. Their theories have been time tested and successful, but the only guide I am using right now is the stack of books written by Dr. Brené Brown. My kids are more authentic, empathetic, courageous, vulnerable and gritty because of it. There is no standardized test or worksheet that could ever teach or measure those skills. I hearten other educators to read and lean into Dr. Brown's research. I, for one, will never be the same. I have chosen a life in the arena and will spend the rest of my days cheering for my students to join me.

Learn more about Dr. Brené Brown here or watch one of my favorite talks she gave here. 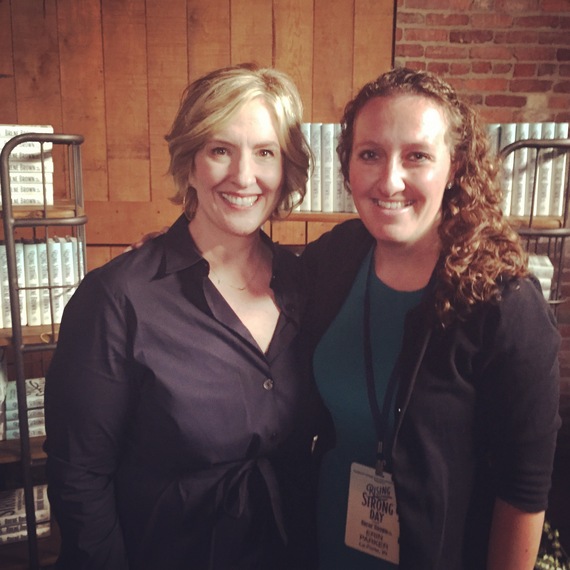