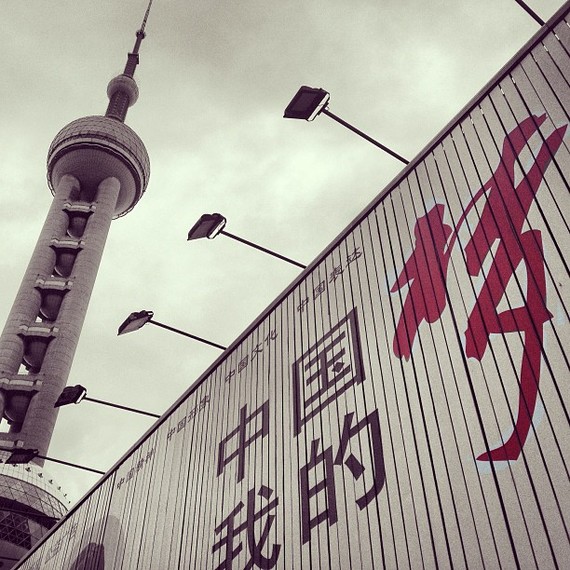 "The China Dream, My Dream"
by
Lawrence Wang
As Chinese President Xi Jinping's first official state
visit
to the United States approaches, we can expect a raft of commentary seeking to explain the inner workings of one of the world's most influential and much-scrutinized individuals. Such efforts, important as they are, remain obstructed by a few serious misunderstandings regarding Xi's political lexicon. Perhaps most significantly, there seems to be widespread confusion over the origins and accurate interpretation of Xi's signature rallying cry, the collective pursuit of the "China Dream" (中国梦
Zhongguo Meng
), which he proclaimed upon taking office in
November
2012.

A few analysts lost no time in calling out the new ideological platform as an inferior echo of the American Dream: a case of ideological reverse engineering. Others, with no trace of condemnation, openly speculated as to which foreign journalist or pop-culture writer could have been responsible for bringing the phrase to the attention of China's leaders. By early 2013, The Economist indeed helped prompt an early consensus that New York Times columnist Thomas Friedman's October 2012 op-ed "China Needs Its Own Dream" was the most likely source for the new platform. Soon, though, James Fallows and others pointed out that other Western journalists had been discussing something like "the Chinese Dream" for years, and that related phrasings had also been bandied about by Chinese writers for at least as long (as we will see below, significantly longer, in fact).

Even Xi himself had already been publicly using such language for a year or so before Friedman's piece made its appearance, and, in the end, it was never very likely that Xi and the rest of the Party leadership were sitting around, minds a total blank, waiting for a foreign journalist to hand them their most important new ideological slogan on the very eve of its official roll-out. Later, even Friedman made clear that he would deserve at most "part credit," nonetheless telling Foreign Policy that "[t]he concept of 'China Dream' was created by my friend Peggy Liu, as the motto for her NGO about how to introduce Chinese to the concept of stability." If not a Western journalist, then, surely a member of Chinese civil society with suitably progressive views must be the true originator of the concept of a wholesome Chinese national dream.

The Economist also wrote a follow-up making allowances for pre-existing PRC uses of the phrase, though it still pointed somewhat defensively to some Party media's subsequent linkage of it with Friedman's article. On the other hand, none of those media had claimed that the latter gave rise to the new slogan or, indeed, was anything but a well-timed coincidence allowing for some convenient propagandizing.

Older than Its American Counterpart

The best insight arising from the 2013 discourse on the origins of the phrase was, however, undoubtedly Fallows'. He correctly noted that "it's worth underscoring the fact that a national dream is not a unique American concept." Indeed, a bit of textual excavation very much bears this out. Important uses of the phrase in the PRC date back decades, notably including an influential 1987 play entitled "The Emigrants' Dream - The China Dream" (Qiao zhi Meng - Zhongguo Meng). In that, and some other recent uses of the phrase, there may certainly be allusions to (usually the idea's differences from) the American Dream. But the concept of a China Dream was not actually invented by an American writer, nor one in the contemporary PRC, nor even anyone familiar with the American Dream. Nor, ultimately, anyone alive during a period of time in which there was an America.

The first very prominent modern usage of the phrase seems to date back to 1932, when the publication The Eastern Miscellany (Dongfang Zazhi) issued a call for readers and various Chinese intellectual figures to write in with their "China Dream" (Zhonguo Mengxiang). Subsequently, many respondents submitted their hopes or plans for the nation, then subject to rapidly increasing territorial encroachment by Japan, ongoing unequal economic and political treatment by Western powers, and internal chaos. As summarized early the next year in Studies on a Solution for China (Zhongguo Chulu de Yanjiu), another publication, the dozens of published responses varied widely in ideology and practical merit, but all were explicitly geared towards defining a "New China Dream" (Xin Zhongguo Meng).

Notably, the idea of an American Dream had itself been brought to the attention of U.S. society only very shortly before, in James Truslow Adams's book The Epic of America. This 1931 coinage was not the prompt for the Chinese term. Indeed, by then, there had already long been other significant uses of the phrase "China Dream," all connected with the problem of how to restore China's national greatness, bring "wealth and power" to her people, and achieve collective success. In 1915, students at a women's college reported being moved to laughter and tears by a patriotic play (not the 1987 one) entitled ... you guessed it ... "The China Dream"; the exact same three characters, that is, that Xi would deploy almost a century later to revitalize similar patriotic sentiments. Earlier still, even before the fall of the Qing Dynasty, a 1904 patriotic serial novel had run in dozens of installments, entitled Dream of China's Flourishing or Failure (Zhongguo Xingwang Meng).

The period of severe national crisis in China engendered by the country's 1895 defeat in the Sino-Japanese War, and the subsequent loss of major territories, gave rise to an intensified debate on national reform, recapture of former greatness, and redoubled efforts at "self-strengthening." It's only natural that this discourse sought to articulate a shared "dream", and it is basically this same model of collective achievement - not the individualistic model of the 1931 American Dream -- that continues to inspire Chinese leaders' use of the phrase.

Interestingly, though, the ultimate roots of the concept of a "China Dream" are far older. The first recorded prominent use of the phrase actually goes back to the strikingly similar period of time six centuries earlier, when the embattled Southern Song Dynasty, having failed to recapture territory lost to the northern Jurchens, was finally overwhelmed by Mongol conquest. The poet Zheng Sixiao, writing during this period, hit upon the celebrated line "Heart full of [the] China Dream, the ancient poem 'Flowing Spring.'" (一心中国梦，万古下泉诗).

It was precisely this line, in fact, that prompted one of the most important early 21st century uses of the phrase Zhongguo Meng by Communist Party leaders. In 2008, the erudite former Premier Wen Jiabao (re)cited the line in response to a journalist's question on fraught PRC-Taiwan relations, apparently implying that, in spite of temporary political divisions, both sides of the strait were bound to unify eventually in pursuit of their shared, ages-old "China Dream."

As we've seen, of course, that dream, in its various manifestations, really is quite ancient. Even Zheng Sixiao defined it in terms of yet another poem, "Flowing Spring," which dealt yet again with the idea of recapturing lost national greatness, prosperity, and stability. That piece, though, is from the Classic of Poetry (Shi Jing) - one of the very oldest examples of Chinese literature, compiled by the 8th or 7th century B.C. In it, the poet describes waking up repeatedly, angry and disconsolate, after literally dreaming of the lost splendor of the former Western Zhou Dynasty - the term "China Dream" thus captures that glimpsed, ephemeral collective glory and the shared hope for its return. Somehow, the poet (whose musings would later be incorporated into the cultural canon assembled by a simpatico countryman named Confucius) never stops to acknowledge his creative debt to the eternally valid insights of early 21st century New York Times opinion pages.

In short, the idea of a "China Dream" was old, celebrated, and packed with meaning well before the English language even existed. It should probably not be considered as a mere calque, or word-for-word translation on loan from a country founded millennia after its first usage. Arguably, it articulates a sense of collective national striving that has for a very, very long time been central to the most influential accounts of what it means to be a member of China's imagined community.