As fans of "Orange Is the New Black" prepare to spend upwards of 13 hours watching the third season of the Netflix series this June, they may easily forget the reality the show is based on. Many of us already know Piper Kerman -- the real Piper Chapman, played by Taylor Schilling -- from her 2010 memoir, but what about the real woman behind the black-rimmed glasses?

In Kerman's book she's Nora Jansen and on screen she's Alex Vause, portrayed by Laura Prepon. But in real life she's Cleary Wolters, a woman who had no idea her story and likeness would be depicted in a hit Netflix series. She first broke her silence with the media in a Vanity Fair interview las year, which revealed Kerman and Wolters never had sex in prison. Now Wolters is ready to tell the full story for the first time with a memoir of her own, Out of Orange.

"The story I have is that I’m not a bad person," Wolters told The Huffington Post. "I’m not an evil drug lord or kingpin. I’m like so many other people." Wolters recounted to us the first time she saw a commercial for "OITNB" -- which Netflix has still never consulted or informed her about -- what she hopes her story will reveal to readers and how Kerman's book and the series helped her face many of the difficult experiences she'd blocked from her memory.

What was your experience like the first time you heard about the show?
Very bizarre. I think the most bizarre incident was seeing a commercial for it, that was really weird. That was the point at which I slipped into some weird parallel universe. In seeing Laura Prepon wearing my glasses and listening to the narration and knowing they’re talking about her lover, that that’s me.

Most people get hooked binge-watching a fictional series, but this is an adaptation of your life. What was it like watching it?
Right. The stuff [the show] did in prison was just really disturbing. I think I realized at that point I genuinely have a little PTSD from it. I knew I had it, but the surreality of it just made it more pronounced because who in the world gets so bothered by just images of women in prison? [...] At first I didn’t know if I would actually like the show, but I had a morbid curiosity. Probably the same morbid curiosity that got me in trouble in the first place. So I kept watching.

Did it get harder to watch?
It got easier because it got further and further away from reality. The plot diverges so completely, especially in terms of my character. Then it just was entertainment.

Were you grateful that it diverged so much?
Yeah. I didn’t want to see a perfect adaptation of my actual life unfold in front of me. I don’t play front and center in [Piper's] book at all, there’s barely a mention of me. So when Alex’s character does play front and center so much in the first season I was like, "Wow, okay. This is weird." They’re creating this whole fictitious person based on me.

And the whole romance plot between Alex and Piper wasn’t real, right?
Right. No, Piper and I were done. We were friends. 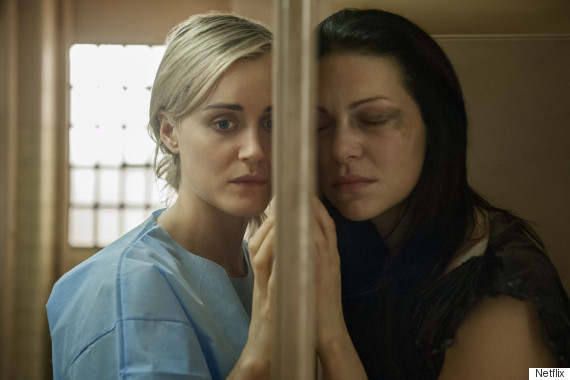 Have you and Piper spoken recently?
I’ve spoken with Piper. We had breakfast together. She’s read my book. We’re on good terms. I don’t know what she thinks about the book yet, though.

At what point did you decide to write your memoir?
After the [Vanity Fair] article came out, I was approached by a literary agent. Somebody wanted to do my memoir, but they were unaware of the fact that I was actually a writer, so I said, "Well, I would love to do my memoir myself."

Do you think you’d have written this had it not been for Piper’s book or the show?
No, I would not. I was not a non-fiction writer and I don’t think I was ready to look at my own story as closely as you have to do. One of the things that was really hard was being honest with myself and reliving some of those experiences. A lot of it I just blocked out of my mind. The only way I can actually convey to the reader the -- I want you to be there, to feel it. I want you to know what that is like so you never go there and so you have more empathy for the people who do go there. We’ve got 800 percent more women in prison than we did in 1987, it’s all because of the drug wars. These women have kids and these kids are growing up without parents and these kids are going to end up in the system too. We can’t just put everyone in jail.

With regard to the show, did Netflix ever consult you?
No. I would be happy to, but I doubt that they will if they haven’t already. It almost feels like it’s an inconvenience that I’m an actual human being. Because they haven’t reached out. It surprises me that people in that production company are not sensitive to the fact that when you do use real-life characters, that even though it’s fiction, if you are a hit show that you are going to impact those real-life character’s lives. A head’s up would’ve been nice. But they must have had reasons not to, and I can’t imagine that those reasons are very altruistic. I would never have gotten in the way of their production, but then again I was so stubbornly under my rock [then] I might have thrown a fit. And really in the end, it was the greatest thing anyone’s done for me, to shove me out of that closet and get rid of my secrets.

What are you hoping for now that the book is out?
I would love it if I could be a writer and a technologist. That would make everything in my life suddenly make perfect sense, why I had to go through all of that. But to be a writer and to get to publish a book and have the opportunity to reach so many people is the coolest thing since Wonder Bread.

This interview had been edited and condensed.

Cleary Wolters' Out of Orange is out now and available on Amazon.