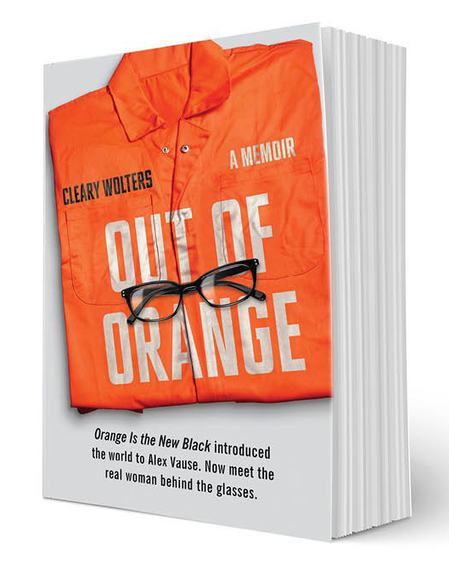 This week I talked with Cleary Wolters about her fabulous memoir Out Of Orange. Cleary is the real inspiration for Piper Kerman's "Orange Is The New Black" character Nora Jansen that became the Netflix series' Alex Vause portrayed by Laura Prepon. Out Of Orange is Wolters' riveting backstory about the criminal activities that led to Cleary and Piper's imprisonment as well as what really happened during incarceration. After her release in 2008 Wolters thought she left her scandalous past behind her until she saw a commercial for a new TV show that stopped her in her tracks. The scene showed a young blond woman hopping out of a van wearing an orange prison uniform. A blur of words and images followed including allusions to lesbian lovers, drug smuggling and life behind bars. Then she saw a woman wearing her signature black-rimmed glasses and dropped the remote. In that moment Cleary knew that her private past had been brought to light in the most public way imaginable and nothing would ever be the same again. I talked to Cleary about the inspiration to tell her side of the story in Out Of Orange and gives us her spin on our LGBT issues.
LISTEN:

When asked what her personal commitment is to LGBT civil rights Wolters stated:

I came out in 1980 and in 1980 in big cities, urban places where fashion is born from, we were tolerated, at best. Things have changed dramatically in the 35 years since I came out but we're nowhere near done with the change that needs to occur. I would like to live in a world where anyone LGBTQ gets to share in the American Dream, I mean all of it from birth to death. I would like to see Americans in general, politicians specifically, treat oppression of LGBTQ people anywhere in the world the same way as they treat oppression for crimes against humanity, human rights, genocide, any of these things directed at us needs to be treated exactly the way they're directed at any other group of people and even then we're not done. Again beyond that as long as there is a human being tortured or killed or imprisoned for who they are, we're a long way from home.

Cleary Wolters, the real-life inspiration for the character Alex Vause in the Netflix series Orange Is The New Black was charged with conspiracy to import heroin and served almost 6 years in a Dublin, California prison before being paroled in 2008. When Orange Is The New Black first came out Wolters was prevented from telling her story under a gag order as part of her probation and was restricted from any contact with Piper Kerman or any others involved in the drug conspiracy case. Cleary has been writing all her life and while in prison wrote volumes of written poetry, fiction and screenplays. Out Of Orange is her first memoir published by HarperOne. Currently she's editing a trilogy of novels she wrote while in prison and a follow-up to Out Of Orange. Wolters is also a software testing engineer by profession and is currently working on her PhD in Information Assurance and Security. She lives in Cincinnati, Ohio.
For More Info: clearywolters.com