Following the grand jury's decision not to indict Police Officer Darren Wilson for the shooting death of Michael Brown, thousands took to the streets in Ferguson, Missouri, and around the country to protest. As alternating scenes of peaceful demonstrations and those of violence, fire and looting were broadcast, Ferguson faith leaders repeatedly urged that the only way to move forward was to amplify the voices of peace.

Many local clergy, who had called for non-violent resistance before the decision, called for justice afterward.

Rev. Ronald L. Bobo Sr., senior pastor of West Side Missionary Baptist Church who has been involved in the local clergy coalition, warned that people should not let bitterness overcome them even at a time when many are asking, "Where is God?"

“If we feel there is injustice, we have to say that, but we have to be sure we respond to it without violence that we might make our voices heard in places where we can get some sort of healing," he said in an interview.

Brown's family had released a statement following the announcement urging protesters to remain peaceful. The family said, "Answering violence with violence is not the appropriate reaction."

Renita Lamkin, an African Methodist Episcopal church pastor who was shot with a rubber bullet during a demonstration in August shortly after Brown's death and has been at the forefront of many protests in Ferguson since, told HuffPost by email that she was "deeply saddened" by the grand jury's decision.

"Failing to take Darren Wilson to trial sends the message that the lives of our young, black sons and daughters has little value in the eyes of our IN-justice system," Lamkin wrote.

According to Rabbi Susan Talve of Central Reform Congregation in St. Louis, she and other members of the clergy had anticipated the grand jury would make its announcement by 5 p.m. on Monday, and many houses of worship had 7 p.m. services planned. When the announcement came after 8 p.m. local time, people had already been waiting outside the Ferguson Police Department for three hours and the situation quickly escalated.

"The streets had been shut down," Talve told HuffPost. "When we got there, they were already teargassing people. When I got there, we were teargassed right away, but we stayed."

Clergy wore orange vests Monday night so that protesters could identify them and seek support, said Brittini Gray, a seminarian at Eden Theological Seminary. Many houses of worship in the area were open all night to provide sanctuary.

Talve said she was caught off guard by how quickly the protests escalated, but she emphasized that there were few injuries. "No one wanted violence, but if we're more upset about the destruction of property than we are about the loss of life, it's idolatry," Talve said.

Rev. Mike Kinman, dean of Christ Church Cathedral, told HuffPost that he attributed much of the unrest to trauma on the part of protesters, police officers and residents generally. After the grand jury's announcement, his congregation held a four-and-a-half-minute silence to honor Brown's family, which had requested such moments of silence to remember the four-and-a-half hours Brown's body was reportedly left on the ground.

“It has been deeply painful, troubling, and has also been, in the context of the prayer vigil, incredibly holy because people have come in to pray from places of great vulnerability,” Kinman said.

By 6:30 a.m. Tuesday, Talve, Gray and other clergy members were back out in the street, this time in neighboring Clayton for a sunrise action. "We prayed a new day in after the violence of last night," Talve said. (See video above.)

Gray said this continued show of solidarity was essential to her not only as an activist but as a person of faith.

“If we truly call ourselves followers of Jesus Christ," Gray said, "then the action has to be beyond prayer and holding services in a sanctuary. It has to be fighting for justice on the streets, in the courts and through legislation as a way to be the feet and mouth of Jesus.”

Central Reform Congregation and many other houses of worship in the area will remain open 24 hours, Talve said, to provide sanctuaries where people can charge their cell phones, eat, receive medical attention and find legal support.

"We're going to try to do what we can to de-escalate violence but keep the movement going," Talve said. "We're not going to be silenced. We're going to continue protest until we see things change."

Community members will continue supporting one another, Kinman said, as they have since the protests first erupted in August. He said he has seen people of all races and backgrounds cry in each others’ arms, listen to one another and pray together.

“And for just a moment," Kinman said, "you get a glimpse of what a city that makes glad God’s heart looks like.”

Clergy Work Through Night, Day Calling For Justice With Peace In Ferguson
Clergy in Ferguson 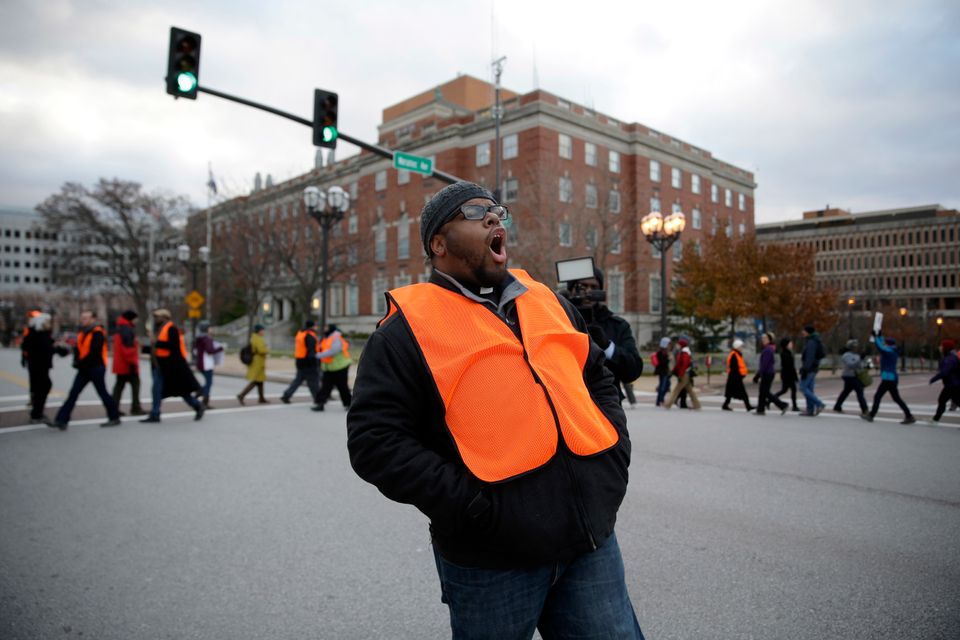