In front of 3,300 mock grave markers representing Americans who have died from gun violence since the Newtown tragedy, the Rev. Matt Crebbin will stand on the National Mall in Washington, D.C., Thursday to pray for expanded federal gun control legislation.

For 24 hours starting in the morning, dozens of clergy and people of faith will join him, making a religious case to restrict the flow of guns in the United States.

"As pastors, we know from ministering to those affected by gun violence and those who may have been directly impacted, how it ripples through our communities, impacting everything that happens," said Crebbin, who leads Newtown Congregational Church in Connecticut and was one of the first ministers to comfort families after the Dec. 14 fatal school shooting. "This is a moral issue that our nation has been facing for so long, and we're hopeful there will be a response."

"We know that laws don't solve all issues of gun violence. We have to work in our communities to promote peace of all kinds, and promote safety and understanding, but certainly legislation can help," said Crebbin, who led the nationally televised interfaith memorial service attended by President Barack Obama in the days after the shooting.

He described the months since as the "most challenging experience" of his ministry.

While optimistic about a bipartisan Senate deal to extend background checks to purchases at gun shows, Crebbin and the clergy joining him said they still hope for more.

"We're glad members of the Senate who until today did not support gun violence reduction legislation have responded to the moral imperative to enact reasonable common sense gun reforms that save lives," said the Rev. Michael McBride, director of the Lifelines to Healing Campaign for PICO, a national faith-based network of grassroots activists that's organizing Thursday's vigil.

"At the same time, we fear this compromise could leave a loophole large enough to drive a truck full of guns through and we'll continue to push for universal background checks for all gun purchases."

Since the Newtown massacre -- and the Sikh temple shooting in Wisconsin and the Aurora, Colo., movie theater killings before it -- several faith groups have mobilized to support more restrictive gun control laws. In an opinion piece last week, U.S. Catholic bishops came out in favor of federal legislation to "require background checks for all gun purchases, to limit civilian access to high-capacity weapons and ammunition magazines and to make gun trafficking a federal crime" as well as banning assault weapons. Speaking on behalf of bishops, Sr. Mary Ann Walsh equated abortion and the death penalty to assault weapons on the street, saying each "each reflects brutality in our society."

The poll found that white evangelical Protestants were the only religious group in which a plurality (40 percent) said that putting more emphasis on God, and morality in school and society was the most important thing to prevent future mass shootings. The survey, which included more than 1,000 respondents, had a margin of error of+/-4 percentage points.

HUFFINGTON POST RELIGION IS UP FOR A WEBBY FOR BEST RELIGION AND SPIRITUALITY WEBSITE!
PLEASE VOTE HERE 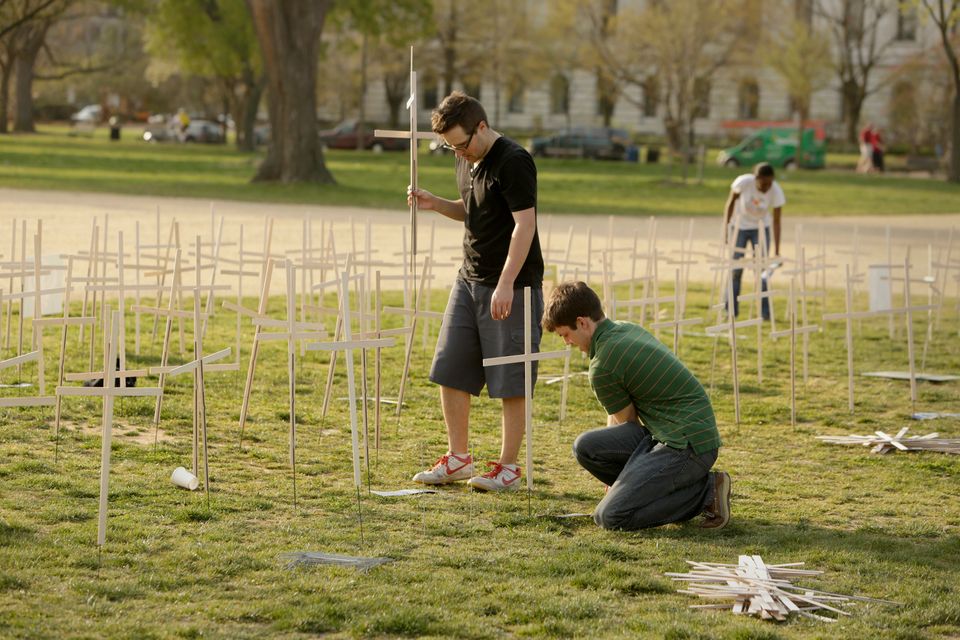