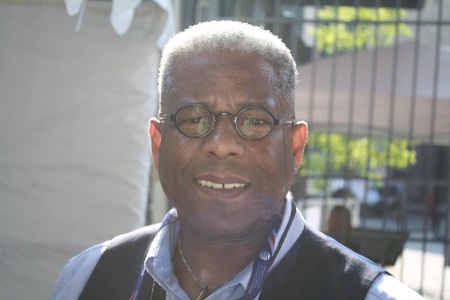 I'm neither walking with nor recording LeBron James, but fans of my interviewee rush to us -- interrupting his every sentence -- as if he were James. They shake his hands generously. They beg for selfies. I am in a different world in which Allen West wears the fame of LeBron James on the streets of Cleveland.

We are en route to the Quicken Loans Arena for another night of Republican drama. Delegates, police officers, sign holders, and flag wavers flood our path. So many of them-- even Iowa Senator Joni Ernst--stop us. Or really him. A hug or a pose, please. Just as I asked West about the treatment of black men by police--"Have you ever been stopped by police officer?"-- a white on-duty officer rushes up to us.

"Hey man, you want to know what he just asked me," West says to the officer. "He asked 'if I have ever been stopped by police,' and I said 'Yeah to shake their hands."

"Can I get a photo with you," the officer asks.

"Of course you can," West responds.

"This is going to go to all my friends in Hartford," the officer responds.

The timing is a gift to Allen West, a former black Republican congressman. Need he say anything more about police and African Americans? Not now. Not here. This pocket of Cleveland feels immune to harsh realities, especially when it comes to race. This is a space where someone might look you in the eye and say, "Donald Trump is likely to shock the country and win over a majority of black voters" -- without laughing. When asked about Trump's challenges with black voters, West offers some of Mama's wisdom. "My mom used to say there is many a slip between the cup and the lip. So we got a long time till November and we've got the opportunity to make a case and all across this country to talk about how do we restore the families, how do we restore small business entrepreneurship, how do we have better education opportunities for families, so that's the message that Trump's campaign has to take out there."

Sounds like familiar rhetoric. Perhaps in this space, you can regurgitate anybody else's words without any consequences.

A high school teacher sees West and interrupts us. The teacher has a bus of high school students who are all conservatives. They thought they would have credentials to get into the hall.

He takes the teacher's information and promises to pass it on. The teacher's smile is wide and West is ready for another question until he hears my words. West looks at me as if I have lost my mind when I mention Melania Trump's plagiarism? "I really don't give a damn about it. Okay, I have got friends of mine in the military that are on 6, 7, 8 combat tours of duty to include relatives. We have problems with Islamic terrorism. We have problems with the rise of Iran, Russia, China, Saudi Arabia."

Many GOP visitors love West as much as Clevelanders adore LeBron. West, a frequent face on Fox News and retired US Army Lt. Colonel, is a Tea Party hero. He grew up in Atlanta in Dr. Martin Luther King's neighborhood and was elected to Florida's 22nd congressional district with the Tea party wave in 2010 -- only to be defeated after one term. He now splits his time between Plantation, Florida; Dallas, Texas; and of course, Fox News.