Religious leaders in Cleveland are demanding action after a policeman charged with shooting two unarmed black citizens was acquitted Saturday.

Leaders of the Cleveland Clergy Alliance on Tuesday called for the firing of officer Michael Brelo and the 12 others involved in the 2012 deaths of Timothy Russell and Malissa Williams, local TV station 19 Action News reported.

"While we respect the court, we do not accept that decision by Judge John P. O'Donnell," said Reverend Lorenzo Norris, chair of the Cleveland Clergy Alliance, according to the station.

Brelo has been on unpaid leave since May 30, 2014, according to The Associated Press.

The high-speed car chase that ended in the deaths of Russell and Williams began when the pair’s car, which Russell was driving, backfired outside a court building. Mistaking the sound for a gunshot, more than 100 cops began chasing after the two civilians. When their car came to a stop after a 25-minute chase, 13 police officers fired 137 rounds at the car. But it was Brelo who got out of his own vehicle to fire at least 15 shots at Russell and Williams while standing on the hood of their car, according to CNN.

The dramatic shooting helped prompt a U.S. Justice Department investigation into the Cleveland police force. The resulting report found a pattern of excessive force in the department and said police often used guns, Tasers, pepper spray or their fists unnecessarily or in retaliation. Following the report, community groups were asked to provide ideas to reform Cleveland’s police force. The Greater Cleveland Congregations, an interfaith coalition, was one of the religious groups that submitted recommendations, which were incorporated into an agreement released Tuesday.

In a separate action organized by the GCC, about 600 people from more than 40 local religious centers linked arms and marched toward Cleveland’s City Hall Tuesday to demand broader reform of the criminal justice system.

The GCC leaders are pushing Cleveland’s county prosecutor to come up with a plan to decrease the number of residents convicted of low-level, non-violent felonies. The Cleveland region puts more people in prison than any other area in Ohio, according to the GCC, many of whom are convicted of minor crimes.

“We continually meet people who have a big ‘F’ on their foreheads for low-level offenses,” lead organizer Rob English told The Huffington Post. “And because they've made a mistake, they couldn't be the mother or father they wanted to be, or gain meaningful employment, or find housing."

"Cleveland is a felon factory and that has to be shut down so that people have a real opportunity for a meaningful life,” English added.

An agreement between the city and the Justice Department was released Tuesday. GCC leaders said they are encouraged by its focus on bias-free policing. But the fight isn’t over yet, they said.

English called the community’s current struggle for reform a “kairos moment,” or an appointed time for God to work.

“This is God’s time, when everything comes together for one moment and this is that moment in Greater Cleveland,” he said. “We’ve got to make sure this happens. We can’t afford to miss it.” 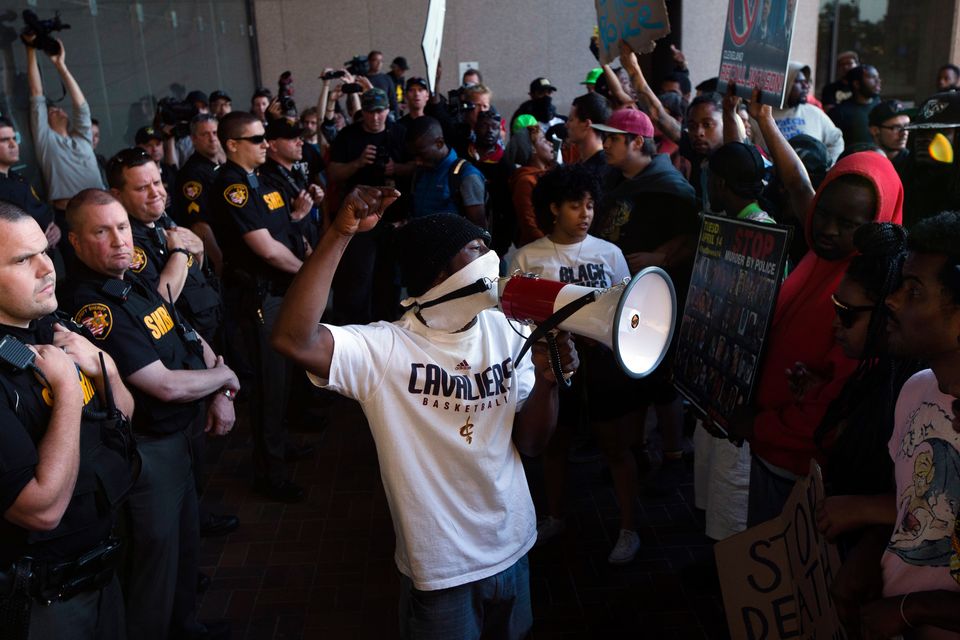 1 / 23
Cleveland Police Shooting
Demonstrators pause at the entrance to the Cuyahoga County Justice Center as police stand guard during a protest against the acquittal of Michael Brelo, a patrolman charged in the shooting deaths of two unarmed suspects, Saturday, May 23, 2015, in Cleveland. Brelo was acquitted Saturday in a case involving a 137-shot barrage of gunfire that helped prompt the U.S. Department of Justice determine the city police department had a history of using excessive force and violating civil rights. (AP Photo/John Minchillo
ASSOCIATED PRESS