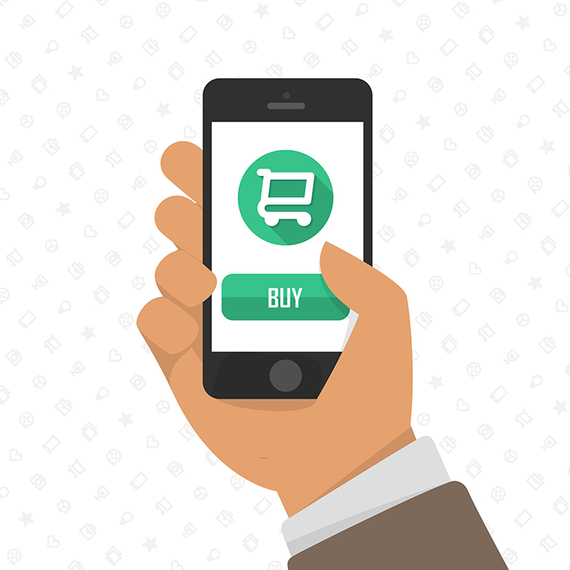 Just ten years ago, if someone had tried to sell you on the "mobile shopping experience," it would have likely resulted in a bit of laughter and disbelief. But today, the ecommerce industry caters to smartphone shoppers. In fact, mobile commerce (also referred to as "m commerce") has become a staple to this industry. Search engine giant Google has even created an algorithm that penalizes sites that are not mobile-friendly to users, an event that was referred to by many as "Mobilegeddon."

Yep, it's true, 4G LTE powers a great deal of the online shopping experience these days. According to a Marketingland report, nearly 55% of all web traffic that streams into the top sites comes from smartphone handsets. But is m commerce really this much of a game-changer for ecommerce as a whole? The short answer is: Yes.

More than 1.2 billion people use their smartphone to access the internet daily, according to a Trinity Digital Marketing publication. About half the population of the United States is connected to the web directly from their handset, so it's no surprise that large marketplaces like Amazon and eBay are cashing in on the m commerce shopping craze by offering convenient one-click shopping options.

The truth told, people like the convenience of mobile shopping. A Nielson report finds that 60% of online shoppers use their smartphone to find a product first. If that same product is able to be purchased in just a click, you can imagine the health of the conversion rate when such convenience is offered to the consumer.

One-Third of Ecommerce is Mobile Driven

Attesting to the validity of the m commerce industry are the hard facts. A recent Internet Retailer report finds that about one-third of ecommerce is driven by mobile shopping. In certain markets, like Asia, the growth of mobile commerce has been exponential, with some regions reporting as much as a 250% in growth over the past 24 months.

At the present, mobile commerce takes in around $100 billion per year in the U.S. This number is expected to continue to grow in the years ahead at a steady pace. The leading Mobile 500 retailers experienced a 68% growth in 2015, according to the IR report cited above, a tally that amounted to $3 billion in total. In the years to come, expect this surge to continue.

In the near future, more people will rely on mobile shopping than desktop or tablet options. A late 2015 Forbes report estimated that mobile shopping apps would exceed $280 billion in generated sales in 2015, representing a $100 billion increase from the same time in 2014. Compound that with the present day, about 14 months after this report was published, and you'd have a healthy $350 billion or more coming in from mobile shopping apps in 2016. 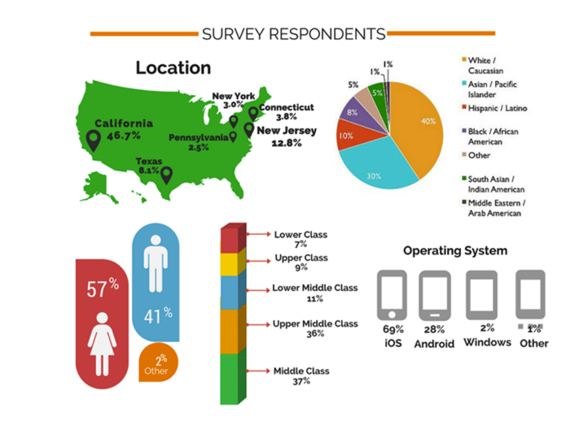 According to a Stanford study on mobile commerce, a large amount of spending is coming from millennials. About one in two millennials have downloaded and used a mobile shopping app in the past two years, with the most popular device being an Apple phone.

Over 2 Billion Mobile Transactions Predicted by 2017 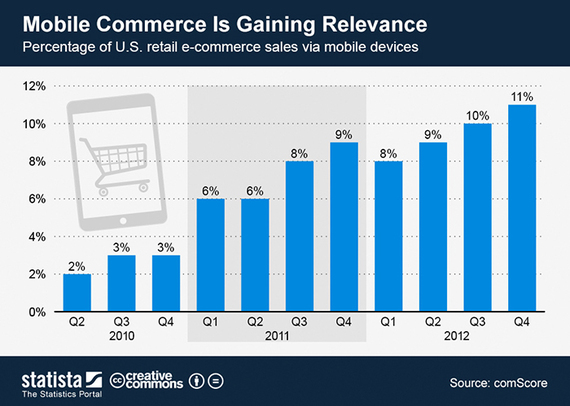 At the present, roughly 15% of shoppers use their smartphone to make purchases, nearly double the meager 8% that did in 2014. By Cyber Monday of this year, 56% of shoppers will buy at least one gift for a loved one from their mobile phone.

Amazon Rakes It In From One-Click Shopping

Amazon has got the m commerce shopping format down pat. They lead the industry in mobile sales, and a big reason for that is their convenient one-click check-out option for Prime users.

A Business Insider publication finds that mobile shoppers spend more time on Amazon (100 minutes on average) than competing sites like Target (20 minutes) or Walmart (14 minutes) combined. What's more, customers come back to Amazon over six times per month, also more than both Walmart (two and half times) and Target (two times) combined. 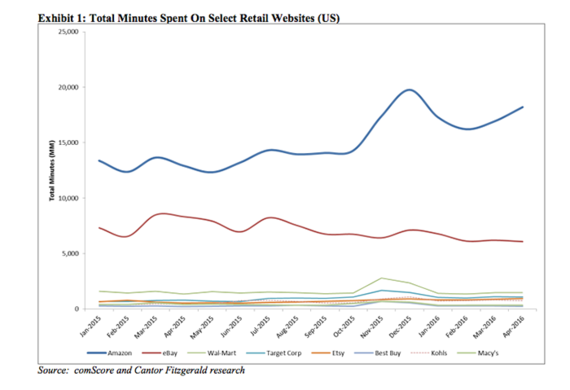 When the holidays come around, Amazon grabs about 70% of the market share from mobile shopping, explains Marketingland. The sheer dominance doesn't stop there. A Mobile Strategies report explains that 61% of consumers who use a smartphone as their primary shopping device only shop at Amazon. In addition, 93% of all mobile shoppers already are Amazon members.

The future of mobile commerce is very bright. By the year 2020, Business Insider predicts that 45% of all ecommerce will come from m commerce. As illustrated by the chart below, this represents about $325 billion per year of an estimated $700 billion annual haul. 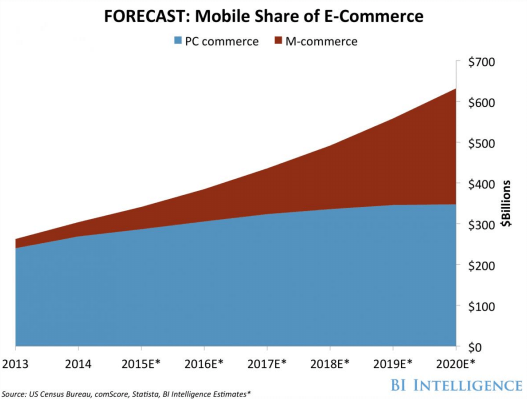 As one-click payment options and integrated mobile shopping carts become more advanced, the playing field will level out. Ultimately, mobile will become the new face of ecommerce. As the aforementioned information concurs, one day, desktop shopping will be as much of a memory as dial-up internet is today.