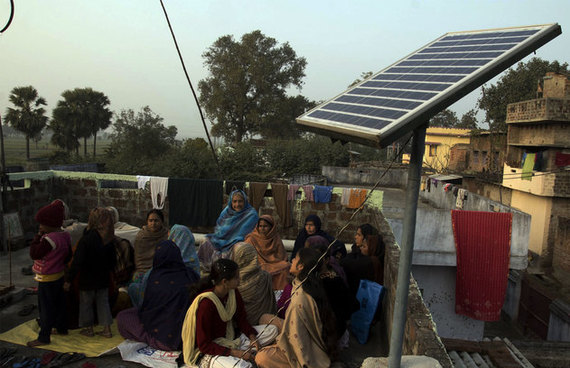 In my blog written from the Paris climate summit, I've criticized activists and participants for a fixation on 'climate aid'. I've argued that this isn't what the world's poor want or need.

It's interesting to look at a real-life example. The Greenpeace website, Dharnai Live, has one such example. With pictures of smiling people in India, drone's-eye views of solar-panel-covered roofs, it's designed to make us feel warm inside. After "30 years of darkness", claims the website, green energy came to the rescue.

But check out this article from Scientific American for a sobering reality check.

In 2014, under the slogan "Energy access simplified", Greenpeace supplied Dharnai with a solar powered "micro-grid" - an electric grid that's not connected to India's central grid.

Greenpeace writes that "Dharnai refused to give into the trap of the fossil fuel industry." That is a somewhat loose paraphrasing of what the people who lived there wanted for themselves.

You see, back in 2010, Dharnai's inhabitants had collected $680 in the hope of buying their way into the power grid, which in the majority of India is supplied by coal-fired power plants. Four years later, still with no electricity, Greenpeace swooped in to the rescue with a solar system.

The day that the electricity was turned on, the batteries were drained of power within a few hours. A boy from Dharnai remembers wanting to do his homework early in the morning before leaving to work in the fields, but there wasn't enough power for the family's one lamp.

Today, power from the solar system costs up to three times as much as power from the central power grid, and it also requires the use of energy-efficient light bulbs, which cost 66 times more than normal light bulbs.

But fortunately for the people of Dharnai - if not for the Greenpeace narrative - the town is today connected to the central power grid.

You see, Greenpeace invited the state chief minister to the inauguration of the solar system so he could meet the grateful inhabitants. However, when he showed up, he was met by a large crowd of people, using signs and songs to demand "real electricity" (the kind you can use to run the stove and the refrigerator as well, or that your children can use to do their homework in the morning) and not "fake electricity" (meaning solar energy).

A week after protesting in front of the minister and the TV cameras, a 100-kWh transformer was installed, and Dharnai received modern electricity.

Today, two-thirds of the original recipient households have opted out of the solar panel scheme, and the rest use it primarily as a backup when the central power grid fails.

This is a part of the story you won't hear from Greenpeace - but it shows why it's necessary to question when well-meaning people tell us we should give everyone power with today's inefficient green technology.