Here’s a recipe for a headache: Try to figure out how the world’s farms will feed humanity in 2050.

Pretty much everyone can agree on the terms of the problem. The UN expects the global population to grow to somewhere between 8 and 10 billion by 2050 -- 1 to 3 billion more than it is today. The standard of living is expected to rise in many countries, and with it demand for more food, especially more meat.

If you stray beyond these uncontroversial assumptions, however, things start to get dicey.

Some say that genetically modified seeds are the answer; others say they’ll kill us all. Some claim more fertilizer is the key to higher yields; others counter that only organic practices will produce sustainable output in the long term. Some assert there’s still time to convince the rising middle class of east Asia to stick to their relatively low-meat diet; others say that the burghers of Beijing and Bangkok will inevitably eat more burgers as their incomes increase.

The biggest question mark of all, though, concerns the impact of climate change. There's still plenty of disagreement on the topic, like over whether climate change will hurt or help global agricultural yield overall as precipitation patterns and ground concentrations of carbon dioxide shift. But many experts agree that a warmer climate will hurt some agricultural regions a lot more than others. Some of the countries that will be hit hardest are also those predicted to have the highest rates of population growth in the coming decades. Other nations expect changes to work to their advantage.

The Google Scholar query “‘climate change’ agriculture” turns up 80,100 academic papers published in the last 10 years alone. One of the leading researchers on the topic, David Lobell of Stanford, won a MacArthur “genius grant” this year for his contributions to the literature.

These researchers are working with the basic premises that higher levels of greenhouse gasses have already increased the global mean temperature by about 1.5 degrees Fahrenheit, and if nothing drastic changes soon, average temperatures will increase by another 3.5 degrees in the next few decades.

A map showing the total amount of heat hitting various parts of the world. Many of the areas in white are currently too hot for serious agriculture, while many of those in black are currently too cold -- but climate change could shift the map in various directions.

The jump could mean disaster for some of the areas with the fastest-growing populations.

Rising ocean levels, for example, could flood low-lying farmlands in river deltas with salt water. This could cripple production of rice and wheat in the hugely productive deltas of the Ganges and Mekong Rivers of south and southeast Asia. Researchers have noted that the deltas currently feed hundreds of millions of people.

And some productive regions could become too hot to sustain conventional crops. The fertile grasslands of Zimbabwe and South Africa, for example, might be forced by 2050 to forgo crops like wheat and corn, which feed millions. Rising temperatures may require less productive, but more heat-tolerant, crops like sorghum and millet.

“The prognosis is really pretty bad for developing countries,” said climate researcher Bruce Campbell, the director of the CGIAR Research Program on Climate Change, Agriculture and Food Security. “The temperatures in many of them are already on the outside of what’s suitable for large-scale agriculture, so another 5-degree rise could be really awful.”

But other areas don't see the news of climate change as all bad. Some places that are currently too cold to support significant agriculture, especially at high elevations and latitudes, could become more hospitable to the large-scale cultivation of staple crops like wheat and corn.

So far, two of the most visible beneficiaries of these trends have been North Dakota, where farmers have had tremendous success planting wheat, and Greenland, where locals have been moving steadily toward agricultural self-sufficiency thanks to milder weather. Photos of lettuce and potato farms in Qatorqoq, near where Erik the Red discovered Greenland, are at once surreal, exciting and ominous. 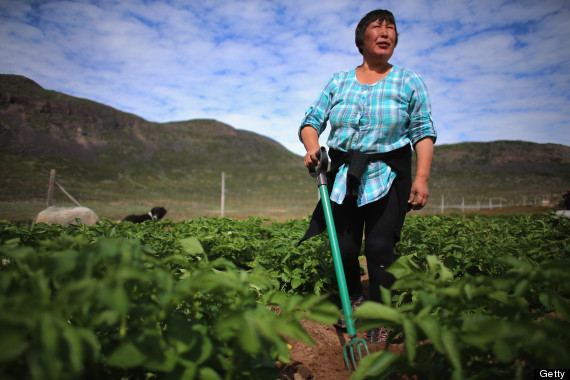 A farm in Qatorqoq, Greenland

Going forward, one of the countries that stands to gain the most is Canada. Almost all the potentially arable land in the now-frigid taiga above the 60th parallel of North America is within its borders.

Canada is already one of the world’s largest exporters of wheat; about two-thirds of its overall production is shipped abroad. The country is also a leading producer of oilseed and barley. As the world warms, many think Canada will emerge as an even more crucial breadbasket. Some have even started to bet on it.

In the past several years, Canadian investors have established several large farmland investment funds that have begun to buy up tens of thousands of acres of prime agricultural land in the heart of the Canadian prairie.

While there are restrictions on foreign ownership of Canadian farmland, national investors have still expressed interest if the option were to become available. Two of the leading American investors in farmland, Shonda Warner at Chess Capital Partners and Jose Minaya of TIAA-CREF, said that they would love to invest in Canadian prairie farmland.

“Saskatechwan is extremely attractive,” Minaya said. “If the restrictions on foreign ownership were lifted, we would move to acquire land there as soon as possible.”

“In a world that needs to double its food production by 2030 to 2050, there are very few countries in the world that are in a position to grow significantly their exports -- and Canada is one of those,” said Tom Eisenhauer, the president of Bonnefield, Canada’s biggest farmland investor.

Eisenhauer said that parts of Canada have already experienced more favorable growing conditions thanks to climate change. Corn is now being grown in large swathes of Manitoba that were once thought to be amenable only to wheat. Farmers in New Brunswick have had more success than ever with potatoes. And the wine industry in British Columbia is anticipating the warmth already enjoyed by vintners in Oregon.

Yet not everyone agrees that Canadian agriculture will fare well in the coming century -- or at least well enough to offset global crop losses expected due to climate change. One big problem is that the soil in much of Canada is less fertile than in places like the Iowa corn belt.

“Actually, the soil in Iowa originally came from Canada,” said Matt Roney of the Earth Policy Institute. “During the last ice age, glaciers took all of Canada’s best topsoil and dumped it on Iowa. So what’s left up there isn’t nearly as good.” 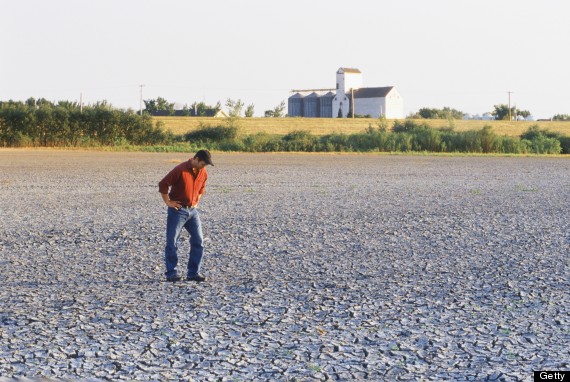 A farmer looks at his land in Manitoba during a drought. While some expect the area to significantly increase production as the climate warms, others, such as Barry Smit of the University of Guelph, think that droughts will happen more frequently thanks to climate change, lowering yields.

University of Guelph climate scientist Barry Smit, who has been conducting research on climate change and Canadian agriculture for the past 30 years, used to believe the macro-scale models that predicted good things for Canadian farmers. But he said he's come to think that climate change will make droughts more frequent and severe across the prairie, making farming far riskier.

Smit said that even if conditions become better for growing on average, it doesn’t help farmers if variability increases at the same time -- because no single year will be an average year.

“Farmers don't deal with norms. The key things for them are when the conditions exceed their threshold for productivity, or when they’re different from their expectations,” Smit said. “So what we should really be focusing on isn’t the average -- it’s the events on the tails, such as droughts and floods, which look like they could become more frequent going forward.

Even if Smit is wrong, and countries like Canada can ramp up production significantly, it will still be difficult to make the global food system more secure. Trade will only be a viable option for feeding people in areas hurt by climate change if those people can afford to import their food.

“A really poor country is not going to be able to afford to import in times of crisis,” Campbell said.

If hard-hit nations can't afford to buy from countries like Canada, the world's new farmland won’t mean much to them, no matter how much it produces.